Mind the gap: Pay gap for full professors increases since 2010 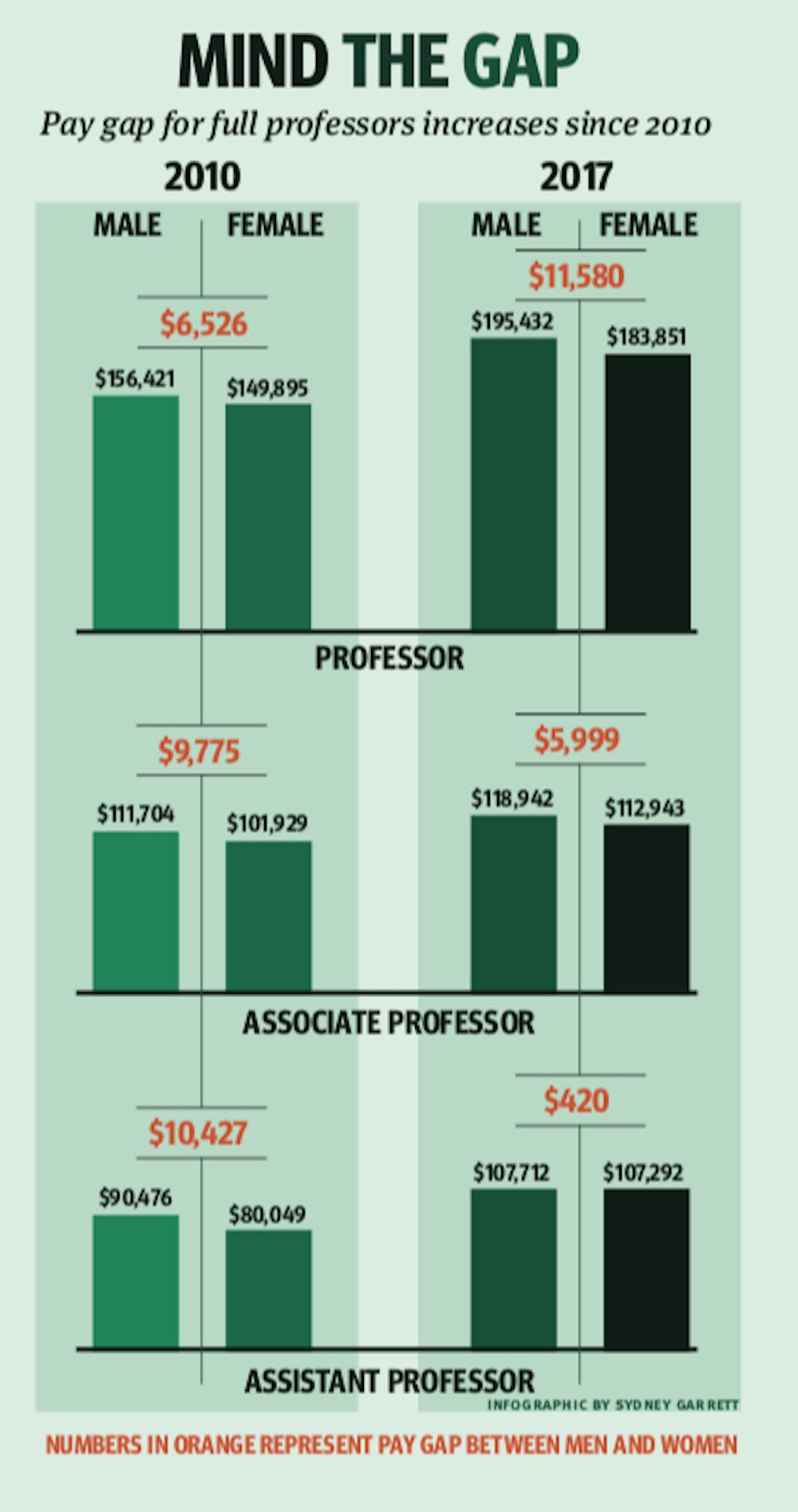 Female full professors at Rice earned an average of $11,580 less than their male counterparts during the 2017-18 academic year, according to data provided by Vice President for Finance Kathy Collins.

The data shows the pay gap has consistently increased for full professors over the last eight years. In 2010-11 the gap was $6,526, which rose to $9,244 in 2013-14 and $11,580 in 2017-18. In 2017, the Chronicle of Higher Education reported that nationwide faculty pay gaps are most pronounced at the full professor level, with male full professors earning on average $18,200 more than female full professors at four-year nonprofit colleges nationwide in 2015.

According to provost Marie Lynn Miranda, much of the pay gap remains as a result of former male administrators who have returned to faculty positions but retain higher salaries due to their previous leadership roles. An additional cause is the smaller proportion of women faculty in fields that “command higher salaries.”

Collins said the pay gap is only significant at the full professor level.

According to data provided by Collins, female associate professors made on average $5,999 less than their male counterparts during the the 2017-18 academic year. This is a decrease from 2013-14 when the gap was $11,626.

“There is essentially no gap with assistant professors,” Collins said. “While a gap remains, we have made substantial progress in closing the gap at the associate professor level in the past few years and our work in this area continues.”

The provost’s office reviews salary discrepancies as part of the budget process to determine whether pay equity adjustments should be made, according to Miranda.

“During hiring season, we provide similar data [on faculty salaries],” Miranda said in an email. “We would point out discrepancies in offers that we see – except deans are acutely sensitive to these issues, and we rarely have any issues to raise.”

According to Collins, the significant pay gap at the full professor level can be partly attributed to disparities in the departments in which male and female faculty members work.

“Salary averages by gender may be skewed by departments that have higher than average salaries because of the field and by fields where women are not as represented as men,” Collins said. “Salaries in business and engineering, for example, [are] higher on average than in other fields.”

Females accounted for 26 percent of Rice’s business faculty in the fall of 2017, according to the Office of Institutional Research. In engineering, females made up 23 percent of the faculty.

Rice is currently working to increase both the number and proportion of female faculty and faculty of color at the university and in leadership positions at the university, according to Miranda. Miranda said in 2017, roughly 27 percent of current tenured and tenure-track faculty were female. However, of the new faculty who joined Rice in the fall of 2018, 48 percent were female.

At the Thresher’s Fall Academic Panel, Ken Whitmire, associate dean for academic affairs, said out of the six new faculty hired in the Wiess School of Natural Sciences last year, five were women.

Salary decisions at Rice are initially made by department chairs and deans of schools, accounting for merit, equity, retention, and promotion and tenure decisions, according to Collins. The provost then reviews salaries with respective deans to make final decisions. Collins also said when faculty receive tenure and promotion to higher rank, they receive, on average, a 10 percent salary raise.

“The university seeks to pay faculty equitably and commensurate with their performance,” Collins said. “The provost and deans review salaries case by case and as previously noted, the provost and deans are working to evaluate and address any gender-based pay gaps.”

Gender pay gaps are an issue at some of Rice’s peer institutions as well. At private universities like Duke University, female assistant professors made 85 cents to the male dollar in 2014, according to a Report to the Academic Council on Faculty Salary Equity.

Miranda said the university has taken on concentrated efforts to ensure more diverse applicant pools in the faculty search process, efforts that include both women and people of color.

“Pay equity is very important to me as provost, as well as to the academic leadership at Rice more broadly,” Miranda said.