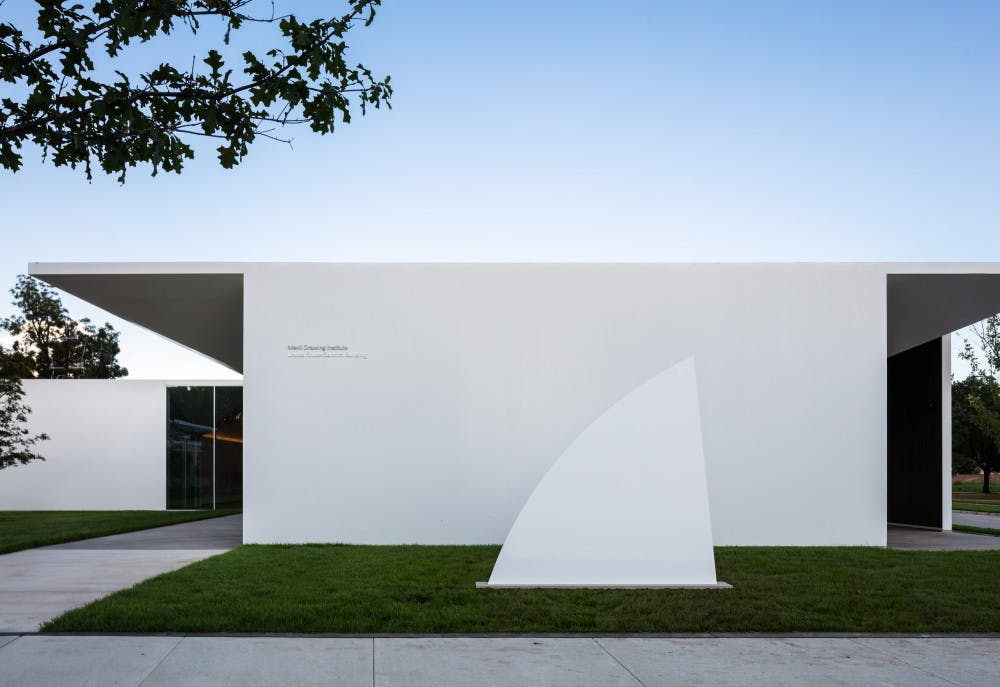 As I walk down a street lined with houses, the svelte, modern Menil Drawing Institute appears from the surrounding greenery, enticing me to discover what’s inside. The MDI, which had its grand opening this past weekend, is the first new building to be added to the Menil’s “neighborhood of art” in over 20 years. According to Director Rebecca Rabinow, the MDI is the first institute in America to be solely “dedicated to the acquisition, conservation, display, study and storage of modern and contemporary drawings.” The space reflects a commitment to exposing the community to the world of drawing through inviting architecture and providing free admission.

The MDI embraces the outdoors, drawing the community through its doors while reminding people of their constant connection with nature. From far away, pristine matte white walls gave me the impression that I was approaching yet another minimalist modern work, but I was pleasantly surprised by the courtyards beyond the outer walls. Slabs of white Vermont marble dot a lush patch of trees and mulch (and adorn the bathroom walls), which helped me segue from the sunny day into the dimmer, intimate “Living Room” that all visitors enter. On one side is the only visitor-accessible room — the exhibition gallery. Offices and spaces for the conservation and examination of art on the other side of the building are inaccessible to visitors without special permission. Floor to ceiling windows on both the east and west sides of the “Living Room” bathe the space in a warm light, wherein white oak floors and an angled ceiling capture the daylight. The MDI is one with the outdoors — nearly every room is lit primarily by natural light and faces a gorgeous green vista. While I stood in a room deep in the center of the MDI, a cloud passed over, noticeably darkening an ostensibly isolated room.

While inside, I was naturally drawn to the exhibition gallery, where 41 drawings by Jasper Johns, widely regarded as America’s foremost living artist, are on display until Jan. 27. Johns is famous for works that transform public symbols such as the American flag into something mysterious and intimate. Johns refuses to discuss any of the seemingly numerous interpretations of his work, forcing the viewer to find meaning on our own. Works such as the pseudo-copies “Untitled” (1984) and “Untitled” (1984) — two distinct works of which even the titles are infuriatingly identical — walk the line between understandable and abstract. They force viewers to pore over their details and puzzle about the meaning behind inked faces or a German poster or an obscure circle. I got some strange looks for trying to figure out “Evian” (1968) with my head pressed against the nearby wall (the angle helped!).

Johns’ work forces visitors to abandon any previous understanding of what drawing entails and experience art from an entirely new perspective. “Skin” (1965) was one of his pieces that caught me off guard with its deceptive simplicity; I saw it early on my tour through the exhibit and dismissed it as a charcoal scribble reminiscent of an incomprehensible Jackson Pollock. However, on my second tour through the exhibit I noticed the hint of a smashed face in the center of the canvas. Sure enough, to make “Skin,” Johns covered his body in baby oil and imprinted his face onto the paper before rubbing charcoal to reveal his distinctive smoosh. For over 60 years, Johns’ work has challenged and pushed drawing forward, which the MDI reflects in its commitment to the next generation.

The MDI further develops the future of art by making its vast collection of over 2,500 drawings accessible to scholars and students alike. Within the MDI is the “Drawing Room,” which is inaccessible to the everyday visitor. Any artist, scholar, student or class can directly contact the MDI to set up a time in the “Drawing Room” wherein they can interact with almost any of the art in storage. The “Drawing Room” is lit by natural light but can be controlled to the finest degree by shades so that any scholar can get the perfect lighting to view the art. The MDI is designed to be a flexible space, with numerous ledges, tables and rooms dedicated solely to exposing the community to drawings.

The MDI is free and open to the public Wednesday to Sunday from 11 a.m. to 7 p.m. The collection is less than two miles from campus, making it accessible for a quick hour-long stroll through the art or an extended examination of the exhibits.