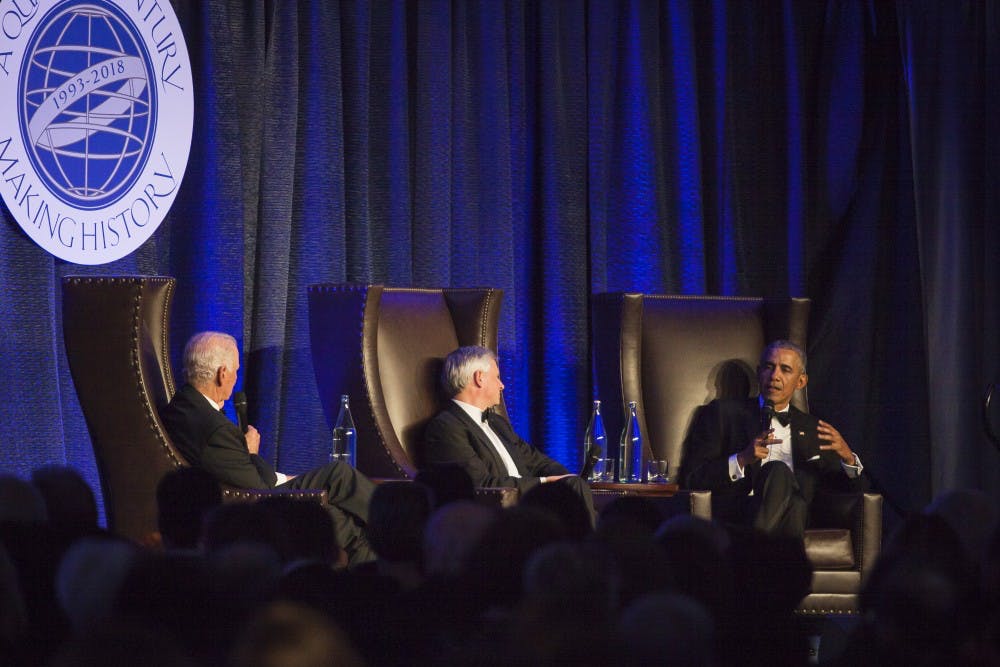 The president of Rice University introduced the former president of the United States to the crowd at the Baker Institute’s 25th Anniversary Gala by listing three things the Thresher Backpage wrote 11 years ago that the two men have in common. Both David Leebron and Barack Obama attended Harvard Law School, served as presidents of the Harvard Law Review and married women who are way out of their league.

Obama and former Secretary of State James A. Baker III participated in a discussion centered on bipartisanship and the evolution of American politics. Jon Meacham, a presidential historian who won the Pulitzer Prize for Biography in 2009, moderated the event.

Meacham declined to mention President Donald Trump by his name, instead referring to him as “Voldemort.” Obama also didn’t mention the president by name but seemed to reference the Trump administration when he described what he believes to be his greatest achievement: sustaining his core values in “an environment where that is difficult to sustain.”

“Not only did I not get indicted, nobody in my administration got indicted which is the only administration in modern history that can be said about,” Obama said. “In fact, no one came close to being indicted partly because the people who joined us were there for the right reasons. We were there to serve.”

Obama and Baker agreed a major difference in American politics from Baker’s time to Obama’s is the increasing divide between the left and right and the disappearance of the center, a difference they attributed in part to the changing media.

“In 1981, your news cycle was still governed by the stories that were going to be filed by the [Associated Press], Washington Post, maybe New York Times and the three broadcast stations,” Obama said. “There was a common set of facts, a baseline around which both parties had to adapt and respond to. By the time I take office, what you increasingly have is a media environment where if you are a Fox News viewer, you have an entirely different reality than if you are a New York Times reader.”

Baker also noted that members of Congress don’t move their families to Washington, which leads to an increased divide due to less socializing between the parties. Obama partially explained this change by the increase of women in the workforce.

“When I was a senator, I didn’t move my family there, in part for a healthy reason, which is a lot of spouses now have careers,” Obama said.  “Michelle was like, ‘Yo, I got a job.’”

Gerrymandering was another  dividing force discussed during the talk, but one that Obama called a “solvable problem,” as in California where there is now a nonpartisan independent commission that determines district sizes. But Baker was less optimistic about the ease of Obama’s solution.

“The problem with that, Mr. President, is it means taking power out of the hands of the politicians,” Baker said. “And I don't know where it's going to work.”

Obama called race “one of the major fault lines in America,” referring to it as a contradiction that the United States has failed to address throughout its history. He said the progress America has made toward issues like racial equality, gender equality and LGBTQ issues has disrupted what he termed a “consensus” that had existed in politics. Obama and Baker agreed that these issues led to the expansion of identity politics, which Obama said is not necessarily new.

A common mistake, Obama said, is to think problems in Congress stem from the people. He noted that, with the exception of “some bums,” the issues come from underlying dynamics that cause good people to “burn out.”

“People ask me often what surprised me most about the presidency,” Obama said. “It is the degree to which the United States underwrites the international order … Even our adversaries expect us to solve problems and expect us to keep things running, and when you start getting dysfunction in Washington ... it provides opportunities for disorder to start ramping up all around the world.”