Worldbuilding: ‘She Kills Monsters’ brings fantasy to its cast and audience 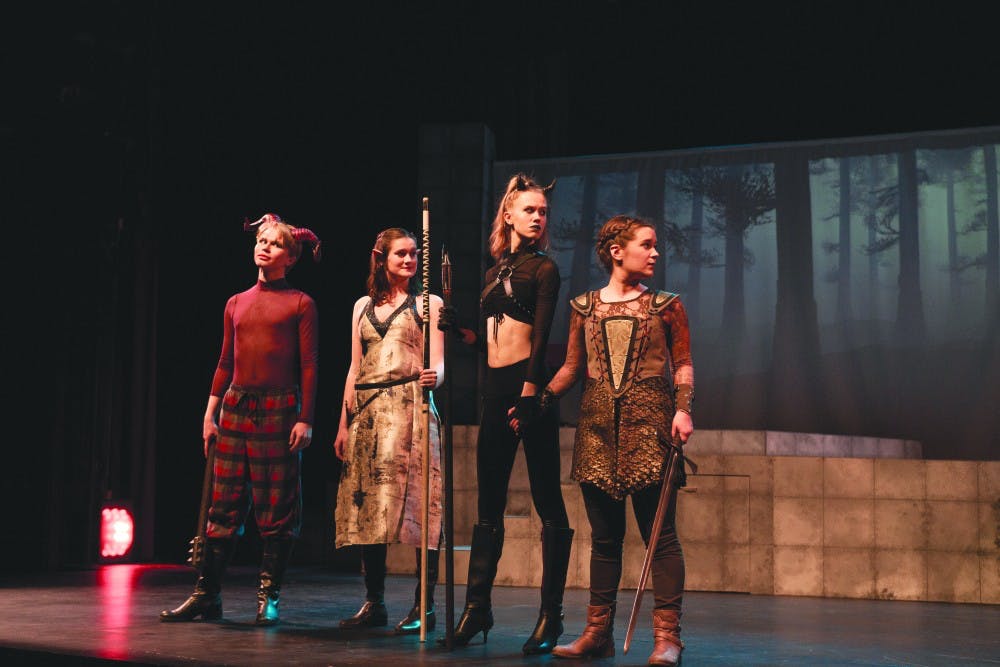 What can fantasy tell us about reality? We are often told that fantasy is the opposite of reality, an imagined, idealized world existing solely in one’s dreams. What is often lost in that analysis is the opportunity for us to uncover the circumstances of one’s reality that inform and create their fantasies. What battles are we losing that we can win only in our imaginations?

It is with these questions in mind that Rice Theatre Program Director Christina Keefe and theater lecturer Heidi Hinkel directed “She Kills Monsters” by Qui Nguyen. The play revolves around the reality of high school teacher Agnes (played by Hanszen College junior Abigail Grayson) as she struggles to come to terms with the loss of her “geeky” teenage sister, Tilly (Sid Richardson College senior Abby Sledge), by playing a custom role-playing game that Tilly left behind. However, Nguyen’s script intertwines this reality with the game’s fantasy; “The Quest for the Lost Soul of Tillius the Paladin” is a window into Tilly’s life, friendships and struggles. Throughout the play, Agnes meets the real people based on Tilly’s fantastical characters, learning more about herself and her sister all along the way.

On the goal of the play, Martel College junior and cast member Matthew Pittard (Orcus / Ronnie) said, “Thematically, She Kills [Monsters] is a show about the power of fantasy: its ability to provide an escape from the troubles of the real life, and to help us imagine worlds which are more kind, fair and vibrant than the one we currently live in.”

According to Keefe, one of the key reasons for choosing to produce “She Kills Monsters”  was the extensive amount of stage combat in the show.

“It would be a challenge for the actors, (many of whom have never held a sword, or done stage combat),” Keefe said in an email response.

In the program’s directors’ notes, Keefe and Hinkel wrote that “[stage combat] is the perfect metaphor for the inner turmoil of the main characters, as well as the internal monsters we all fight on a day-to-day basis. Not to mention, swinging swords and clashing steel makes everything more exciting.”

Hinkel handled most of the fight choreography duties, and multiple students raved about their experience working with her.

“[Hinkel is] always really upbeat and encouraging, and she makes playing with swords even more fun than it is inherently; plus her fight choreography is on-point!” Sledge said in an email response.

Although this is only Hinkel’s second show at Rice in recent memory (she choreographed for “Dogfight” last semester), she seems to have won over these students and taught them meaningful skills, all while still managing to put out an excellent product.

“She Kills Monsters” is notable for both the size and range of experiences present in the cast.

Some, like Sledge and Grayson, have already performed in multiple department shows, while others, like Jones College freshman Lydia Wang (Vera / Evil Gabby), are performing in their first department show after being involved in theater while in high school.

Still others, like McMurtry College senior Gretchen Cahill (Narrator / Evil Tina / Farrah) have followed a different path. Cahill came to Rice on a soccer scholarship in 2014, but changed course after a year to pursue what she called her true passion: dramatic arts. “She Kills Monsters” is Cahill’s first stage play since she was in 6th grade, and according to her, she could not have been happier with the experience. In an email response, Cahill said that “[t]he rehearsal process, although long and tiring, was SO MUCH FUN,” before adding, “Theater kids are the best type of people.”

“We’ve all bonded so much over this process,” Sledge said. “We actually tend to end up at Chaus or The Hoot after rehearsal more often than [going back to our respective colleges].”

Coincidentally, some members of the team seem to have a genuine interest in role-playing games. Pittard is the dungeon master for a game of Dungeons & Dragons that includes a large swath of the cast.

“Since [D&D] largely takes place in our imaginations, it was fun to see a playwright try to translate all that action into a theatrical format,” Pittard said.

The fantastical world of “She Kills Monsters” was made possible by the incredible work of the costuming, props and crew teams. Stage manager and Wiess College senior Steffannie Alter said her favorite moment of the show was the first full tech run through.

“Projections, music, sound and fog contribute so much to this play,” Alter said. “It was really satisfying to see everyone’s hard work in these different areas of the show come together.”

In a serendipitous example of how life can imitate art, the plot and themes of “She Kills Monsters” seemed to have played out in its cast. At the play’s end, Agnes has a newfound appreciation for her sister, her friends and her fellow role-playing campaigners. She realizes that games like Dungeons and Dragons are as much about winning and losing as they are about creativity. These stories are an outlet for writers like Tilly, players like Agnes and directors like the story’s dungeon master, Chuck (Jones College junior Zachary McCray).

It appears that the members of the cast have developed the same appreciation for each other and for theater as a medium.  By being able to construct this fantasy world – in which Agnes teams up with Tilly’s fictional characters to learn more about herself and others – the cast and crew seem to have accomplished the same task in reality, growing closer to each other and gaining a greater appreciation for the arts.

“Putting on a play takes real camaraderie and dedication to your fellow castmates. It feels amazing when everything comes together,” Cahill said. “You are not only proud of yourself, but also all the great people who helped you.”

It is a statement that rings true in life, art and RPGs.

“She Kills Monsters” runs this Thursday, Friday and Saturday night at 8 p.m. in Hamman Hall. The performance runs about 90 minutes. Tickets are $5 for students.