Spotify and Horrify: 10 songs that are actually scary 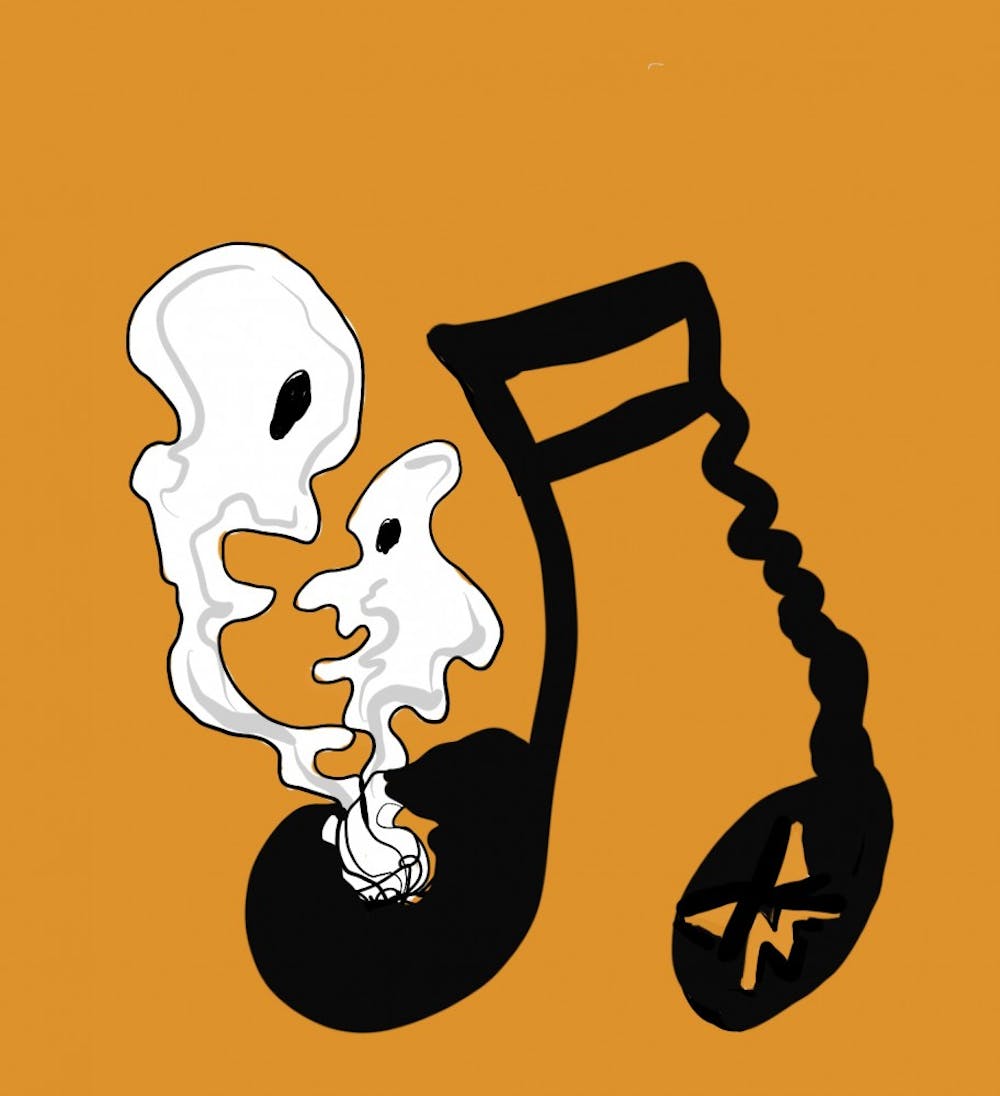 It's that time of year again. People are wasting quality pumpkin goop to carve a bunch of topological circles instead of making pumpkin spice coffee, eating candy corn and pretending it’s actually good and wearing costumes at nighttime — from the innocent kid dressing in a cute costume to the participant of Baker 13 dressing in an even cuter no-costume. It's officially #spookyszn.

And for the occasion, quite frankly, I'm tired of the idea that “Monster Mash” is the established mood-setter. If I pay money to go to a haunted house, and the first thing I hear is that song, I'm going to walk out, ask for my money back and go to the Skyspace for a more terrifying experience. Halloween “scary” has become cliche when it comes to music. Real spooks come from multiple aspects that are much deeper and can be conveyed deeper in music. They tap into personal, distressing fears. Hopefully, this list provides those necessary feelings on this occasion and effectively retires “Monster Mash” for good.

This first song isn’t just haunting, it’s hauntingly beautiful. Arca starts off his latest gory self-titled album in a minimal space that packs you in so tight you can start to hear your own heart beat faster. This is a song that sounds heavenly and feels hellish at the same time, like a demon entering a cathedral.

Lil Wop is the trap’s Jack Skellington. He spews out descriptions of his grimy lifestyle as a nihilistic trapper in a haunted-castle-door-pitched croak coupled with a dark trap beat full of knells and bass. There are many examples from his catalog that make use of this vibe, and there will be more in “Wopavelli 4.” But this cut on SoundCloud is where you’ll find him in his darkest, most threatening personage.

If albums were amusement parks (as “ASTROWORLD” was) and each song was a ride, this song would be the ride I remember from Kings Dominion. You settle in for a couple seconds. Then you’re immediately shot at max speed into a dark space which intersects a raging sea, and you sense the monster right under you. Later, as the ride ends, you begin to float into a calm sea, left with only your memories of the ride.

Warning: This song includes details about domestic violence and assault. After I first listened to this song, I never wanted to come back to it again. Eminem creates an illustrative narrative about his partner at the time that features graphic and hyperbolic details about how chaotic their relationship has become. Later inspiring future songs that delve in the triggering deconstructivism of the human psyche, such as “u” by Kendrick Lamar and “Dance with the Devil” by Immortal Technique, Eminem (who now regrettably refuses to age out of the persona created in “Kim”) shows how dangerously someone can degenerate himself or herself by obsession with another.

5. “Licking an Orchid” by Yves Tumor

This song successfully masters the art of the jump scare. You dream in the atmosphere that blossoms and blooms with every petal, and then all of a sudden the flower turns black, the sky turns red and every vertebra you feel in your spine tightens as the walls flood into your ears with ultimate fright. Soon the atmosphere comes back, but it’s too late. This is a love song too. You can only hear it to believe it.

B L A C K I E, a local Houston noise hip-hop artist making music for over a decade, probably has the most psychotic song of this list. The sax. The distorted drums. The layers upon layers of unorthodox, rhythmic instruments. The muddied screaming. The drama. This mastery of art can only make your state of mind uncomfortable.

There are few things in this misogynistic world that are scarier than a woman who recognizes her strength and power. This is a good thing. And this is exactly the space that rapper Rico Nasty taps into here. She roars with an intensity as sharp as her fangs as the mosh-ready bubblegum trap production amplifies her right in your face. This conveys the entirely necessary, threatening emotion that doesn’t just say “move please,” but “GET *CLAP* OUT *CLAP* OF *CLAP* MY *CLAP* WAY *CLAP*!” Thus, I suggest you get out of her way.

8. “Lift Yourself” by Kanye West

The scariest aspect of this song is not the sample breakdown, the “poopity-scoops” or the self-induced hype-up of the “poopity-scoops.” No, the scariest aspect of this song is that this is the first music we heard from Kanye after he devolved into tweeting his polarizing political opinions and whipping out the MAGA hat. The more he devolves, the scarier this song becomes. It is the first indicator that Kanye’s music, which once rose to the heights of “My Beautiful Dark Twisted Fantasy,” could actually be as low as the sunken place he is residing in.

In most horror movies, some of the scariest moments come not when you hear a suspenseful sequence of strings and surround sound, unironically rising up to its maximum level right before the AAAHHHHH moment, but when the scene unfolds in complete silence. John Cage’s avant-garde piece “4’33”” is a whole song of complete silence. Bone-chilling.

I don’t need to explain the traumatizing effect this song has.