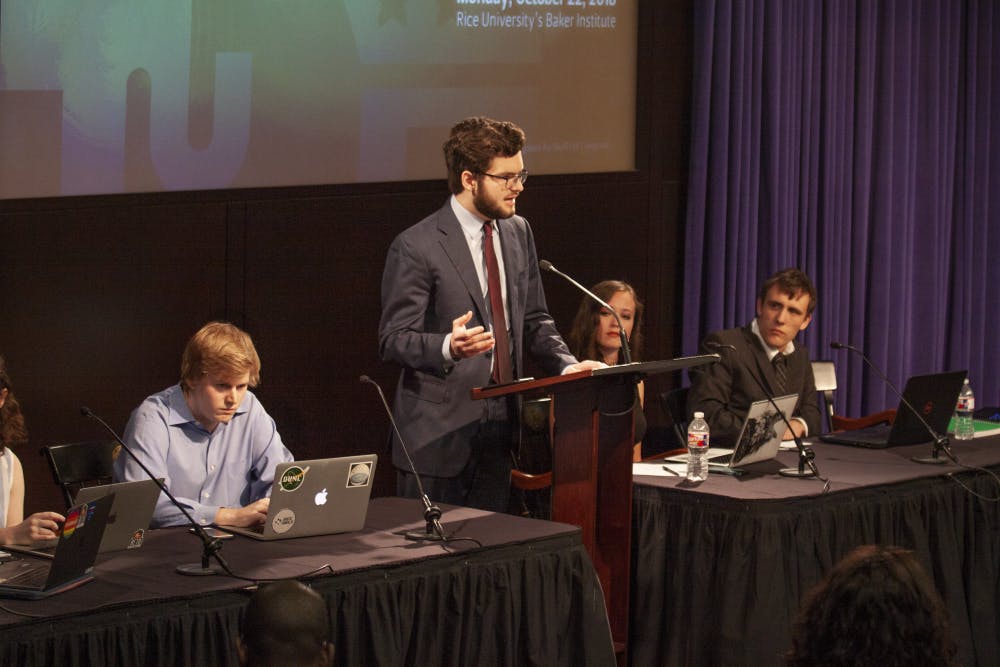 The resolution they debated stated that the United States federal government should guarantee the rights of all released felons to vote, and was affirmed by the Democrats and rejected by the Republicans. Each organization was represented by three speakers.

According to Maddy Scannell, a Martel College sophomore who debated for the Democrats, the debate allowed the Democrats to spread awareness about a lesser known topic and express their objections.

“Stripping voting rights from felons is undemocratic, amoral and just bad policy,” Scannell said before the debate. “Felon disenfranchisement is pervasive across the U.S., but not many people seem to know about it.”

“By preventing released felons from voting, the stigma of incarceration persists,” Coleman said.

The Republicans argued that granting all released felons the right to vote was too broad of a policy proposal to be undertaken at the federal level. Thomas Keller, a Duncan College sophomore who was part of the Republican team, argued that individual states should have the ability to determine their voting laws.

“This is a complicated issue that should be handled state by state, person by person. No one felon is the same as another,” Keller said. “This is an issue with nuance. By trying to fit all felons under one heavy-handed, wide-reaching, federal government policy, we treat none of them fairly.”

“One in every 13 voting age African-Americans cannot vote, a disenfranchisement rate more than four times greater than all other Americans,” Coleman said. “This is not an accident.”

Juliette Turner, chairwoman of the Rice College Republicans, pushed back against the argument that felony disenfranchisement is targeted discrimination by the Republican Party.

“Anyone who stands by this fact cannot be looking to the actions of the Republican Party. Such statements are evidence of the partisan divide that is plaguing our nation,” Turner said. “Let us put politics aside, and instead of saying that we are Democrats or that we are Republicans, let us address this issue as Americans together,” Turner, a Duncan College junior, said.

“Attending these debates is a great place to hear the opposing side and realizing that it may not actually conflict with your views as much as you originally thought,” Turner said. “This is why we, as a club, always love participating. We are all about finding common ground while simultaneously addressing our differences of opinions.”

“With this topic in particular, I hope people reflect on the actions that conservative state legislatures are taking to disenfranchise citizens. Whether that’s stripping rights from felons or imposing ID requirements that make it difficult for many students to vote, this is a wide-reaching issue that deserves more attention,” Scannell said.