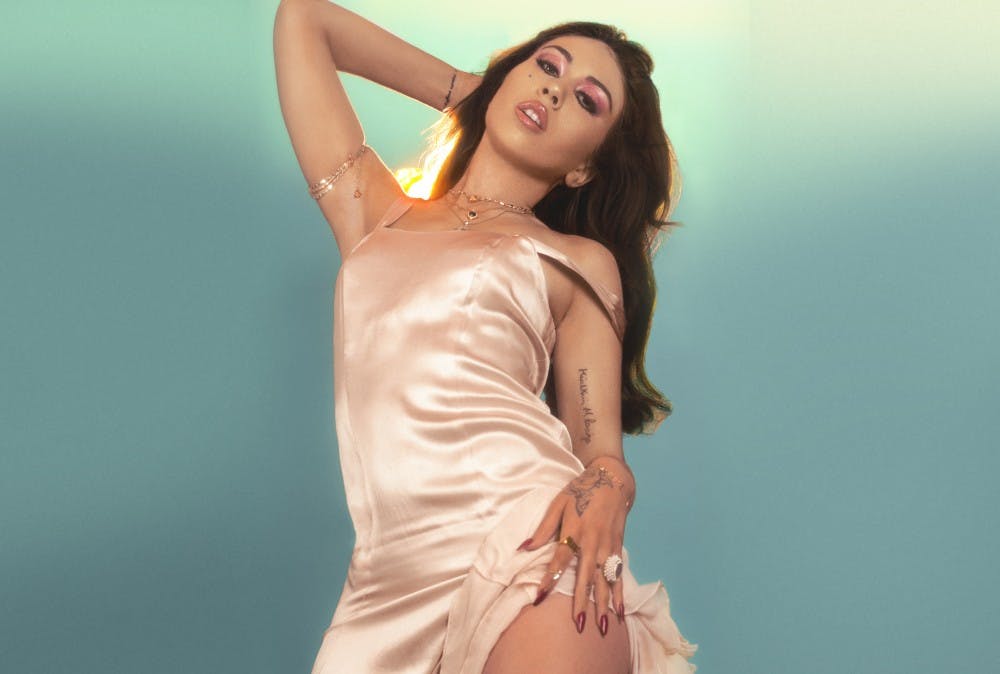 When the crowd caught its first glimpse of Kali Uchis’s silhouette behind a silken screen at House of Blues on Sept. 28, there was a collective gasp – and then the screaming started. The eclectic, R&B singer-songwriter began dancing almost as soon as the crowd started chanting her name. When she parted the screen and slipped onto the stage, she did so with the confidence of someone who knows she deserves to bask in the limelight. Uchis released her debut album “Isolation” in April 2018 to critical acclaim, garnering the attention of a wide crowd, including Snoop Dogg and Juanes, a Colombian superstar.

Whereas Gabriel Garzon-Montano’s opening act depended on audio effects and editing, Uchis’ performance stood entirely for itself. She didn’t use flashy lights or backdrops to supplement the music she created. Instead, the silk screen provided a solid backdrop, and the lights alternated between different jewel tones to create a dreamy haze that kept the attention focused on her voice and body. Uchis wore a backless pearl-studded bra, and her green billowy pants moved with her body as her hips swiveled across the stage. (Side-note: Kali Uchis has a really well-defined six-pack).

Uchis held nothing back in her performance and the audience was right there with her, knowing every word in each song that she sang. The members of the audience rapped Tyler the Creator’s verses in “After the Storm,” and belted their hearts out during “In My Dreams.” The noise built to a crescendo that held its power and didn’t break even as  the stage lights dimmed. The audience was mostly young and female, a fact bolstered by the emptiness of the bar and the omnipresence of off-the-shoulder tops. The crowd responded with the most heart when Uchis broke into her Spanish songs, crooning along.

She slowed her dancing between songs to take moments with the audience. She explained that a difficult 5-year relationship from her teenage years inspired “Killer,” a plaintive, swooning elegy. During this explanation, the audience shouted encouragements at the stage, with one person near the front yelling “Fuck men!” Kali Uchis winked back and said, “Not men. Boys.”

In sharing these bits of herself, Uchis created a sense of intimacy that was bolstered by the small and cozy venue, House of Blues, which was perfect for a performer whose talents are as performative as they are audible. Accordingly, Uchis’ performance felt intensely personal, appropriate for an artist who sings about heartbreak, family drama and belonging, appropriate for an artist whose first album is named “Isolation.”

But the audience never felt isolated from Kali Uchis. Her infectious swaying and catchy, beautiful lyrics connected all members of the audience to her and to each other.