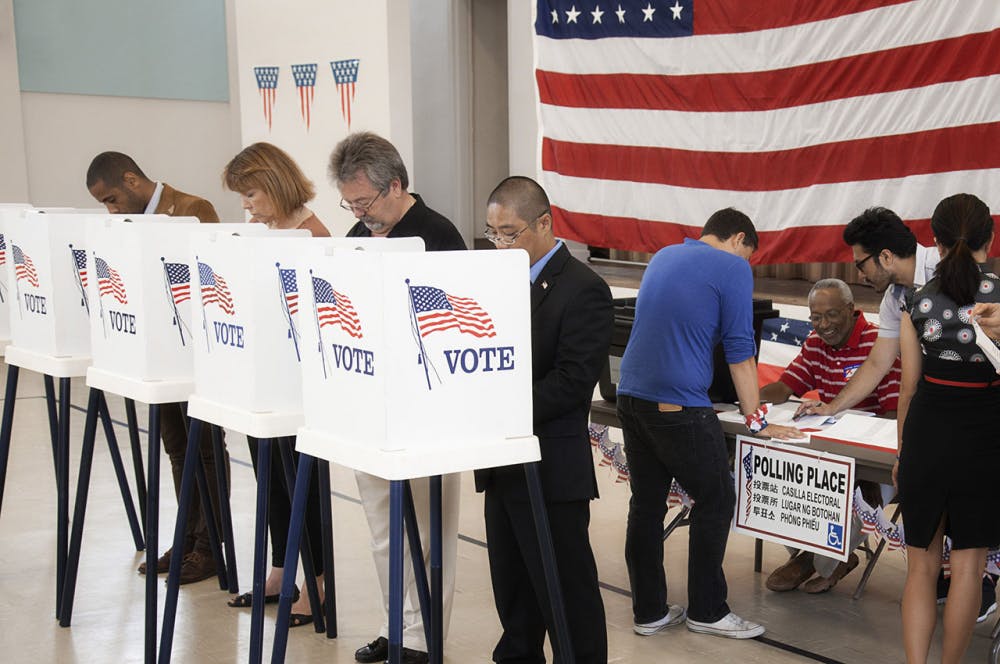 Some voters have reported that Harris County voting machines appear to be changing their votes, according to the Texas secretary of state.

The problem, in which voters’ choices in the U.S. Senate race are switched to another party or left blank, has affected ballots from both parties but appears to be isolated to those who vote straight-ticket, choosing an option at the top of the ballot that automatically selects all candidates from a particular party.

The Texas secretary of state’s office issued an advisory Oct. 23 urging voters to double-check their selections on the final review screen before casting their ballot.

Every Election Day polling place and early voting location in Harris County uses Hart Intercivic eSlates, according to documents from the secretary of state’s website. The problem occurs when a voter presses a button or turns the eSlate’s wheel before the screen has fully loaded, Sam Taylor, communications director for the Texas secretary of state, said in an press release.

Taylor said his office was aware of fewer than 20 instances of vote-flipping and that the majority of those who reported problems said their selection had been left blank, not changed to another party. All of the voters who reported problems were able to review and correct their choices, according to Taylor.

Taylor’s press release instructs voters to wait three to five seconds for the screen to load before turning the scroll wheel or pressing any buttons to avoid the issue. The secretary of state’s office also said it had provided county election administrators with additional signage reminding voters to review their choices in 2016, when it received isolated reports of this issue.

“It is important for all voters in the 82 Texas counties utilizing the Hart Intercivic eSlate to understand that the voting machines are not malfunctioning, nor are they arbitrarily ‘switching’ the choices of voters who cast a straight-party ballot,” Taylor said in the statement.

“If I were to put you in a car and reverse the direction of the steering wheel, you could say ‘Oh, it’s user error that they drove into something’ because it was, in fact, your control that got you to drive into something,” Byrne said. “But that doesn’t really make it user error.”

Though there is no evidence of wrongdoing in the reported instances of vote-flipping, the eSlate has a poor record in terms of usability, according to Byrne.

Cybersecurity researcher and Rice computer science professor Dan Wallach blogged about this problem a decade ago. He said this particular issue had crossed the line from a usability problem to an outright bug in the software.

“The secretary of state’s [statement] actually suggests that it’s a software bug, and that’s an important distinction,” Wallach said. “If you move too quickly, which is to say you select a straight ticket and then immediately start launching ahead while the machine is busy dealing with your straight-ticket selection, the machine can get into a confused state that might accidentally cause votes to flip,” Wallach said.

Byrne said this year’s outcry is likely more intense because the race for U.S. Senate between incumbent Ted Cruz and challenger Beto O’Rourke, which tops the ballot, is competitive for the first time in several election cycles.

“This is one that the Democrats feel like they have a shot at, so I think people are much more engaged and much more worried,” Byrne said.

Bob Stein, a pollster, election researcher and Rice professor of political science, suggested that the problem is more pronounced this year because voters have been more likely to split their tickets later on the ballot, voting for some Republicans and some Democrats.

Stein pointed to the race for county judge between Republican incumbent Ed Emmett, who Stein said has support from both parties, and challenger Lina Hidalgo, a race that is on a later page of the ballot. For example, when straight-ticket Democratic voters attempt to scroll to the judge’s race to select Emmett’s name, they may start scrolling before the page loads, which may unintentionally change their vote in the first race on the ballot — that between Cruz and O’Rourke.

“The basic results were that 1) The slate of commercial DREs available when they did the study were not very good, and 2) the eSlate was the worst,” Byrne said.

Separately, Wallach expressed concerns about the security of the eSlate. According to Wallach, Texas’ eSlates still use the same software that California used in 2007, which means Texas’ voting machines run on at least decade-old software.

The 2007 review to which Wallach contributed led California to decertify eSlates for wide use, retaining them for use only by those who need accessibility accommodations like headphones or alternate input devices, according to Wallach.

Harris County acquired its eSlates with funding from the Help America Vote Act, according to  Stein. The law passed in 2002 after voting issues in Florida led the Supreme Court to decide the 2000 presidential election.

“[Harris County was] using punch cards. We were the hanging chad county,” Stein said, referencing the infamous Florida ballots that were at the center of the 2000 election controversy.

Early voting in Texas ends Friday, Nov. 2, and Election Day is Tuesday, Nov. 6. There will be polls on Rice’s campus in the Rice Memorial Center.

This post has been updated to reflect Byrne’s affiliation with Rice University.