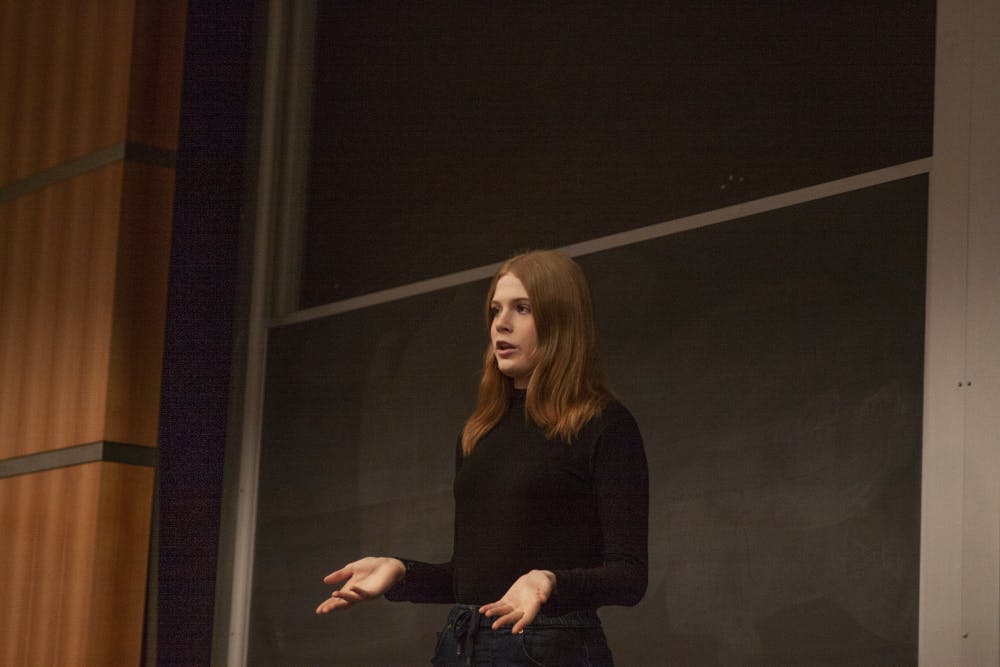 Ella Grant, a conservative transgender woman with a YouTube audience, shared her political views and opinions on the transgender community in a conversation hosted by the Rice University College Republicans on Oct. 17 as a part of their Shred Nonsense Speaker Series.

Grant, an 18-year-old from Canada, joined YouTube in July 2017. Most of her videos are opinion pieces focusing on the trans community and liberal politics from her perspective as a conservative. Grant said this was her public speaking engagement.

Grant said that while the trans community gave her the support she needed at the beginning of her transition, the community is “cult-y” and its members were not welcoming of her views.

“When it comes to political views, the way I see it, trans is what you are, it’s not who you are,” Grant said. “If the entirety of your identity is your gender, you’re boring. That’s the tea ... It should be accepted, not promoted, and that’s absolutely where we’ve gotten at this point, is promotion. And I can’t really get behind that, but it took a really long time to get there, and unfortunately the vast majority of the trans community vehemently disagrees with me on that one.”

Grant said one of the most significant changes in opinion that she has gone through was her view on the validity of nonbinary identities.

“I’m 18,” Grant said. “I went through that political metamorphosis against nonbinary [identities] at 16. And if your opinions don’t change from the time when you were 16, that’s weird, because your opinions grow and change as you do.”

Grant said that while her opinion has changed from early videos where she attacked the validity of nonbinary identities, she does not regret making those videos.

“[My perspective on nonbinary people changed] in about April,” Grant said. “And that video’s from last October. And looking back on that video, do I regret it? No. Were the jokes funny? Yeah. Was the editing good? Absolutely. Was the aesthetic on point? Definitely. That intro was like, iconic, like, skinny legend. Do I have any regrets about how I made the video? No, however, going back would I do things differently? Yes.”

Baker College senior Rebekah Bryant said while she personally doesn’t agree with Grant’s views on a lot of the topics she brought up, it was refreshing to see how productive the conversation on gender was.

“She’s only 18 and her views are constantly shifting, and she’s actually open to new evidence that contradicts hers, unlike many conservatives in the U.S.,” Bryant said. “I think the Rice Republicans were trying to use her coming here to absolve themselves of some of the criticism from people in the LGBTQ+ community by having this one trans mouthpiece spout similar oppressive ideas. Largely, though, I think that goal was thwarted, as Ella herself admitted that she was more center or left-leaning by U.S. standards. For instance, unlike the Rice Republicans president, who supports the current president, Ella criticized her younger self for supporting Trump and his politics.”

“As a sociology and history major, I think there were aspects of history that she was just wrong about, talking about gender dysphoria as something that has always existed, just doesn’t make sense,” Forsyth said. “I appreciated some of the interpretation, I think there should be more dialogue, but when it comes to facts, when it comes to statistics, those aren’t things we should argue about. Those are things we should agree on, and then we should talk about interpretations.”

Grant also invited people outside of the Rice community to attend the event. Paige Jacobson, a senior at the University of St. Thomas, said she was introduced to Grant after watching Blaire White, another conservative transgender YouTuber.

“She posted a video saying if anyone wanted to go to Houston, and it’s like a five-minute bus ride,” Jacobson said. “I was introduced to her because of the YouTube algorithm, because of the world of political commentary, but at the same time, [she] just has a unique aspect because she’s transgender.”

Duncan College junior and Rice University College Republicans Chairwoman Juliette Turner said the aim of the speaker series is to provide viewpoints that open the audience to a new way of thinking.

The full conversation with Ella Grant is available to watch on the Rice University College Republicans Facebook page.