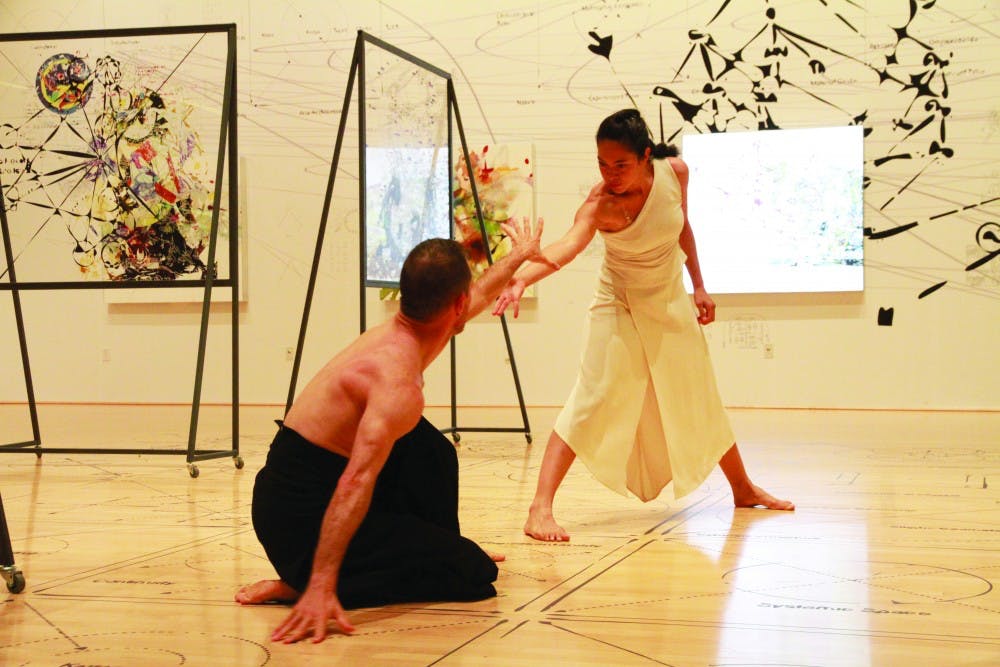 The performance art show “Dimensions Variable” was held Oct. 27 in Matthew Ritchie's “The Demon in the Diagram,” a sprawling exhibition currently occupying the entirety of two galleries in the Moody Center for the Arts. The 40-minute piece, produced by the Hope Mohr Dance troupe and composer Evan Ziporyn, was intended to use dance to elaborate on the message of Ritchie's piece.

Ritchie has called his piece an attempt to “present all human knowledge,” making its uncentered, seemingly chaotic nature feel intellectually honest. Since this message cannot be clearly delivered within a house-sized quantity of gallery space, I was a little doubtful of how four dancers were going to manage it within less than an hour. (My cynicism only became greater when they made me throw out my boba.) I was pleasantly surprised to discover that the piece made few pretensions of elaborating or recapitulating Ritchie’s points. Rather, what “Dimensions Variable” presents is an ironic, brutal defense of the lack of clarity within Ritchie's piece.

In the first room, I experienced what I can describe only as a brief review of history. Two dancers stepped out, making sinuous, random movements to the sound of atonal music. Two new dancers emerged and physically repositioned the two original  dancers, taking their arms and torsos in hand and gently moving them. Henceforth, the four moved in unison, in a more controlled fashion. The music adopted a regular, harsh beat, and the dancers’ movements became jerkier and faster. Finally, they began destroying the layout of the room, shoving all the central canvasses into a row. In what seemed to be a glimpse of a hopeful future, the dancers, their actions steadily more random, rearranged the canvasses and went on to the second room.

It was only in the second room, however, that the irony of “Dimensions Variable” became clear. The dancers donned masks — masks that seemed to be the product of every common conception of indigenous masks, but in fact belonged to no civilization. As the presentation drew to a close, the dancers performed a “ritual”: reverent but incomprehensible movements alternated with call-and-response. The message was angry — if you want a centered, clear history, it seemed to say, here you go.

The first room became a cautionary tale about the dangers of an easy story. The second room, with its touristy take on indigenous ritual, felt like a rebuttal of the argument that history could maintain its structure even as additional perspectives were incorporated.

“Dimensions Variable,” as a defense of Ritchie's chaos, landed some really good punches. It was an all-around enjoyable experience, with beautiful routines and a well-scored soundtrack. But it was also playing with fire, presenting, however ironically, a sugarcoated, conflict-free view of cultural interaction in order to make its case. It straddled some lines it didn't have to touch. Aggressive art is often fun art, and “Dimensions Variable” was both, but it could have been a lot less messy without losing its force.