BROCKHAMPTON delivers a high energy ‘I'll Be There’ performance 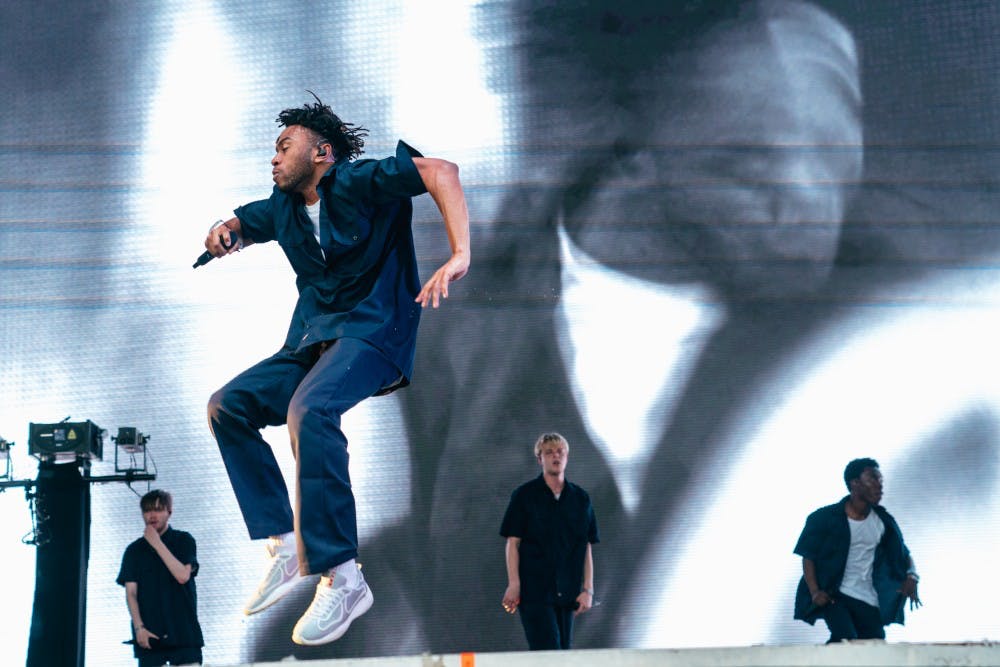 Ameer? Not here. The “best boyband since One Direction” opened their “I’ll Be There” Houston tour stop by performing some songs from “iridescence,” their first full album without formerly prominent member Ameer Vann. Despite the dismissal of one of BROCKHAMPTON’s main rappers, the Oct. 7 performance of this new album retained the cathartically aggressive yet catchy energy of their earlier performances.

Kevin Abstract’s and Bearface’s smooth vocals seemed to melt everyone in the crowd with “TONYA”  – until the audio suddenly cut off. During the first few songs, there were technical difficulties leaving the audience confused.

However, the audio concerns quickly dissipated after a short break to fix the speakers, and the concert picked back up. The visuals meshed perfectly with the eclectic vocals. Going along with the “iridescence” album cover, the screen projected “VIVID” thermal-colored videos along with a vibrant lightshow. Most notable was the footage of a rollercoaster ride, which fully encompassed the contrasting ups and downs in the album.

Between tracks from their new album, BROCKHAMPTON performed songs from their “SATURATION“ trilogy. Whenever Vann’s lines came up in “GUMMY” and “SWEET,” they skipped over it and went to the next member’s verse. This flowed surprisingly well. When the lively beats of “BOOGIE” and “QUEER” coursed through Revention Music Center, the ocean of fans cheered and screamed. Like a whirlpool, mosh pits opened up in the middle of the floor and sucked everyone into them, with no toe left uncrushed. These moments of unity were intense as everyone collided into each other in chaotic rhythm.

To close, BROCKHAMPTON performed the soft melancholic “SAN MARCOS,” creating a sentimental air. Fans banded together and swayed back and forth for a five-minute, unforgettably heartwarming moment. The band continued with “BLEACH,” pointing the microphone at the crowd, allowing the audience to sing along to the harmonious chorus.

After BROCKHAMPTON exited the stage, cheers for an encore promptly began. Minutes later, they returned and performed three other songs, including their single “1999 WILDFIRE,” which brought the crowd to a peak.

The setlist of BROCKHAMPTON’s “I’ll Be There Tour” was a perfect mix of fresh new songs and iconic older songs. Even without Vann, the band carried on, making energetic music and delivering exuberant performances. As for the band members’ vocals, they were just as strong and bold in real life as when I blast them on Spotify while I clean my room. From the fear of shattering my phone to the worries about being trampled in a mosh pit, the adrenaline of making it out alive truly enhanced the immersive experience of the concert.