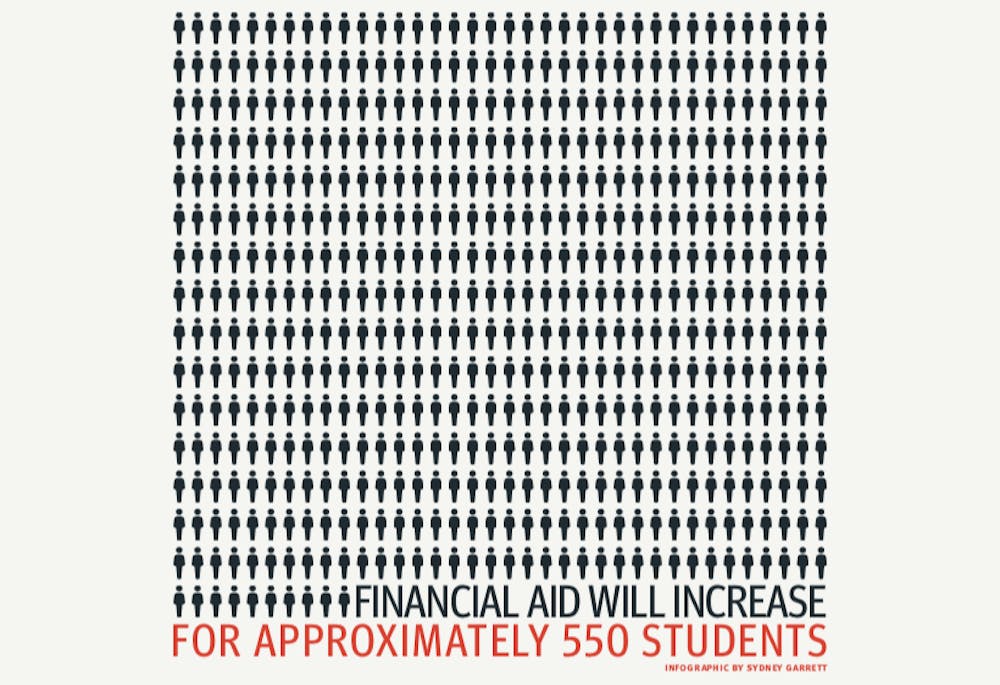 When Ramee Saleh read that Rice would be expanding its financial aid beginning next year, she was so overwhelmed by the news she cried, and then, as Rice students do, posted on the Rice University Places I’ve Cried Facebook page.

Saleh, a Sid Richardson College senior, said even though the change won’t affect her, she understood the impact from her own experience seeking financial aid as a high schooler — she said she initially crossed Rice off her list after not receiving enough need-based aid, but received a merit scholarship a week before the deadline to commit that allowed her to attend.

“It makes me proud, the most proud I've ever been of Rice,” Saleh said.

Under the new financial aid plan, undergraduates eligible for need-based aid whose family incomes fall between $65,000 and $130,000 will receive full tuition scholarships, according to a Rice University press release. Eligible students from families with incomes between $130,000 and $200,000 will receive scholarships that cover at least half of their tuition.

The plan, titled The Rice Investment, will also increase support for students with family incomes under $65,000 by offering aid that covers mandatory fees and room and board, in addition to full tuition, which Rice University President David Leebron said many students in this category already receive. Both incoming and currently enrolled students will be eligible, according to the press release.

“There's nothing more important here than our students and we take pride in having a program that makes our education affordable,” Leebron said. “We think [this plan] is very important to the families of our students.”

Agustin Carrizales, a Wiess College sophomore, took to Twitter at 1:01 AM after the news broke to express his emotions. A first-generation, low-income student, Carrizales wrote that difficulties in the past year had left him unable to pay his tuition.

“I had been ignoring the payment suite for these past few months because there was no possible way for me to pay,” Carrizales wrote. “Worrying about academics and how I was going to pay has been one of the most stressful things in my life. This news is incredible.”

The new plan will also reduce student debt, according to the press release. Rice will no longer require eligible students from families with incomes up to $200,000 to take out loans as part of their need-based financial aid — scholarships and grants will replace loans. The press release states students are still expected to contribute toward their enrollment “through moderate earnings from summer and academic year jobs.”

“If we can raise 150 million, we can sustain the plan in perpetuity,” Leebron said.

The main impact of the plan will be an increase in the amount of aid students receive, not the number of students who are eligible for aid, according to Leebron. Under the current financial aid plan, Rice does not provide loans to families with total incomes below $80,000 as part of the financial aid package, according to the Office of Financial Aid’s website. For families with incomes above $80,000, Rice provides a $2,500 subsidized loan.

Benjamin Hernandez, a Rice alum who is running for Congress in Texas’ 9th district, said he is proud that Rice is adopting The Rice Investment. Hernandez said he dropped out of Rice at the beginning of his senior year in 2004 for financial reasons before returning to school when Rice offered him additional grants and financial aid.

“I am the perfect example of how financial assistance can turn students into productive members of a community,” Hernandez said in a press release from his campaign. “Without the help that Rice gave me, I would not have finished school or entered public service.”

“It’s possible that we will see an increase in applications,” Da Silva said.

While Leebron said he expects the plan to increase the application pool, this was not a motivating factor, especially given the 21,000 applications Rice received in the last cycle.

The press release states families with “atypically large assets or certain unusual circumstances” may not qualify for need-based aid under the new plan even if their incomes meet the cutoff.

According to the press release, The Rice University Board of Trustees has endorsed The Rice Investment. Leebron said the plan emerged in the spring after the adoption of Rice’s Vision for the Second Century, Second Decade, which includes the goal of expanding diversity among the student body.

“I think we're going to see more applications from lower-income and middle-income students, and I hope lots of students will see this as a commitment to a socioeconomically diverse student body,” Leebron said.

Leebron said only about five institutions offer a level of support for the middle and upper middle class comparable to that of The Rice Investment.

Rice did not charge tuition from its opening in 1912 until 1965, as dictated in its initial charter. Although it has been 53 years since the policy was discontinued, Leebron said the university is hoping to honor its early tradition.

“We were concerned looking towards the future that middle class families would perceive private higher education increasingly as out of reach and there's been a national conversation around that,” Leebron said. “We wanted to make it clear that at Rice...it's going to be affordable to people from all income classes.”

Like Ramee Saleh, Sunee Kate Quirante cried when she read the news. Her crying turned to sobbing and at 1:51 am, she Tweeted the feelings she was experiencing.

“I was crying for 20 minutes straight and I realized halfway through that it wasn't out of happiness or joy or even relief,” Quirante said. “It was kind of a painful cry. It didn't feel victorious, it felt like I was just cleansing myself of this source of anxiety that has been debilitating for me for the last three years since I started going to college and thinking about how I was going to pay for college.”

Quirante, a Lovett College junior, said she hopes Rice continues to move in the direction of increased accessibility through changes that could include forgiving student debt or including textbooks in the cost of tuition.

“This is a very monumental step and I'm so grateful for it and so many people will be positively affected by this, myself included, but this is just a step and it shouldn't be considered the end goal when we think about wealth distribution,” Quirante said.