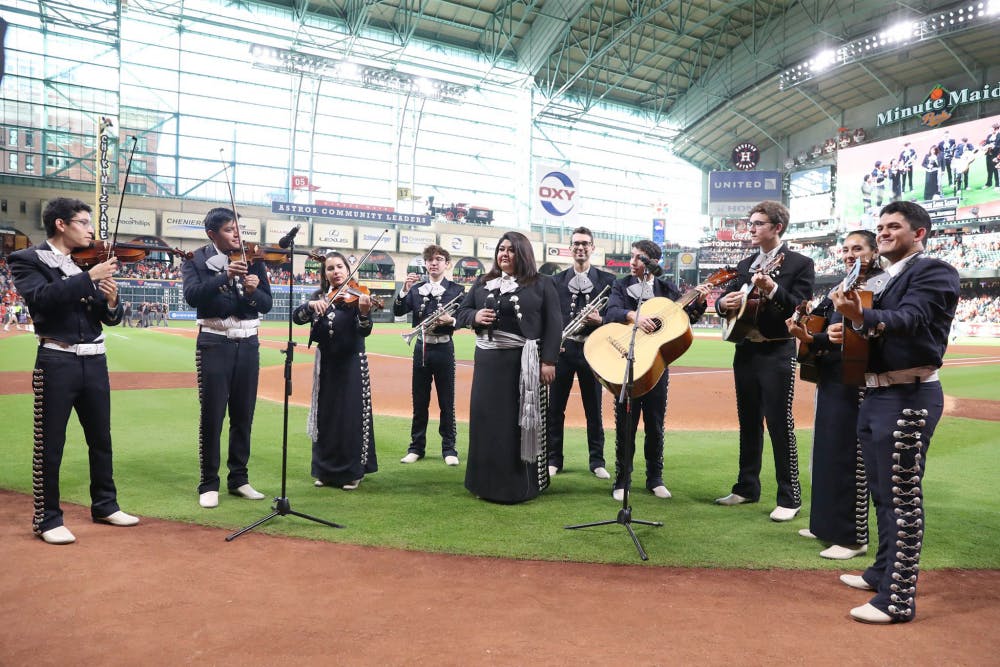 Cesar Zapata never envisioned himself as a performer in a mariachi band. He associated mariachi music with his uncle, never himself, and throughout middle and high school only performed in choirs. But now he’s the president of Rice’s own Mariachi Luna Llena.

At Rice, he continued singing in choirs, both in the Catholic Chapel choir and for Rice Chorale. When he performed, he sang in choir proper form: standing still, with good posture, hands by his sides. Then Mariachi Luna Llena caught his eye, and he had to learn a whole new way of performing.

“In mariachi music you can’t [stand still as you would in choir] because then the crowd won’t be receptive to your music,” Zapata, a Baker College junior, said.

At gigs, Zapata tries to engage the crowd through movement and interaction. When he can, Zapata walks into the crowd, or dances with children while singing.

Luna Llena, which means full moon in Spanish, was founded in 2013 by Alberto Rodriguez (Baker ‘15). The group wanted to incorporate Rice’s mascot into the title, but decided the Spanish words for owl, “lechuza” or “búho,” were too hard to pronounce. They drew inspiration for the final name on the connection between owls and night.

The band performs at events around Houston, including weddings, quinceñeras, festivals, and, once, a funeral. Every performing member of the group splits the fee the group receives at a gig, but one share goes to the group to pay for new trajes (uniforms), equipment and member reimbursements. During big holidays, members can make a lot of money. This past Cinco de Mayo, the group had five gigs in two days which resulted in a “good payday” according to Zapata.

Amanda Perozo, Luna Llena’s head of traditions, said the pay can be sporadic.

On Saturday Sep. 15, the group performed the national anthem at the Astros game.

“I didn't really notice that there were thousands of people because I was so focused on just playing,” Rossum said.

“Just being on the field and seeing all the lights and all the players around you--I'm never going to forget it,” Zapata said.

The group started memorizing their repertoire of over 30 songs a couple years ago, so their movement isn’t limited by the music stands they previously carried with them to every show. Incoming group members memorize approximately ten songs before they start performing gigs, according to Rossum, but those who have been in the group longer have about 30 memorized. Newcomers have a semester, sometimes longer, to perfect the songs and learn them by heart. Some of the songs that are the most requested include Cielito Lindo, El Rey and La Negra.

Performances don’t always go smoothly, however. The group once tried to quietly leave after performing at a wedding, only to be foiled by a staircase.

“There was this big marble staircase and then I slid down the stairs during the best man’s speech,” Rossum said. “I yelled, ‘Oh, boy!’”

Perozo can’t choose which type of gig is her favorite, but knows that she likes those with a receptive crowd.

“I like gigs where people know the music and they join in and can sing and dance,” Perozo said. “It's not fun to play for a crowd that doesn't know what you're playing and can't appreciate the cultural history behind the music.”

As soon as Perozo started playing violin, her mother predicted she would join a mariachi band one day. She auditioned freshman year and has been playing with the group ever since.

Although Rossum also started playing for Luna Llena freshman year, he has also played at a number of student bands at Rice over the past few years, including Steve Cox's Beard, Ghost Shark, Dead Moon Saloon and the Rice Jazz band.

The members of Luna Llena connect to each other beyond their music and performances, according to Perozo. The group loves to joke around and make fun of each other—they even have a private meme page for this purpose.

“It's just nice to have that social network of friends, outside of your classes, outside of your college, having something you can do that's just fun,” Perozo said. “Being in the mariachi band, you're not just in a band that plays music. The group kind of feels like a family.”

Peter Suzuki, a Martel College senior, now plays violin with Luna Llena after being inspired to join the group following an Owl Days performance when he was in high school.

“I was super excited to reconnect with my Mexican heritage coming down to my mom’s hometown of Houston,” Suzuki said.

He said one of his favorite moments with the band was playing at the Astros game.

“I’ve played baseball all my life and being invited to stand on a Major League field just 90 feet from THE Jose Altuve was like a dream,” Suzuki said.

For Matthew Anaya, mariachi was a chance to do something different from the classical music he had played for his whole life.

“I do it because it is so fun and fulfilling to be able to play for people across Rice and Houston,” Anaya, a McMurtry College senior, said. “It has enhanced my experience at Rice by giving me the opportunity to share my culture with my fellow students and by giving me a family that loves making music and hanging out together.”

His favorite song to play is La Bikina.

“We play it at nearly every gig we go to because it is sort of a fan favorite,” Anaya said. “It is full of character and there are violin and trumpet solos, which give us a chance to show off.”

Ian Frankel started playing with the group as a guitarist when he was a freshman, but is now a guitarron player. The guitarron is a large acoustic bass guitar. According to Zapata, without a guitarron, Luna Llena can’t perform at a gig--the sound is fundamental to mariachi music.

His favorite memory of the group is when they went to hear an all-female mariachi group at Miller Outdoor Theatre in Hermann Park. Having just come from a gig at Valhalla, they were still wearing their trajes and carrying their instruments.

“During intermission the people around us started cheering [and] asking us to play, so we started to play a traditional song, Volver, and hundreds of people around us began singing along,” he said. “It was a really powerful and awesome moment bonding with the Houston community.”