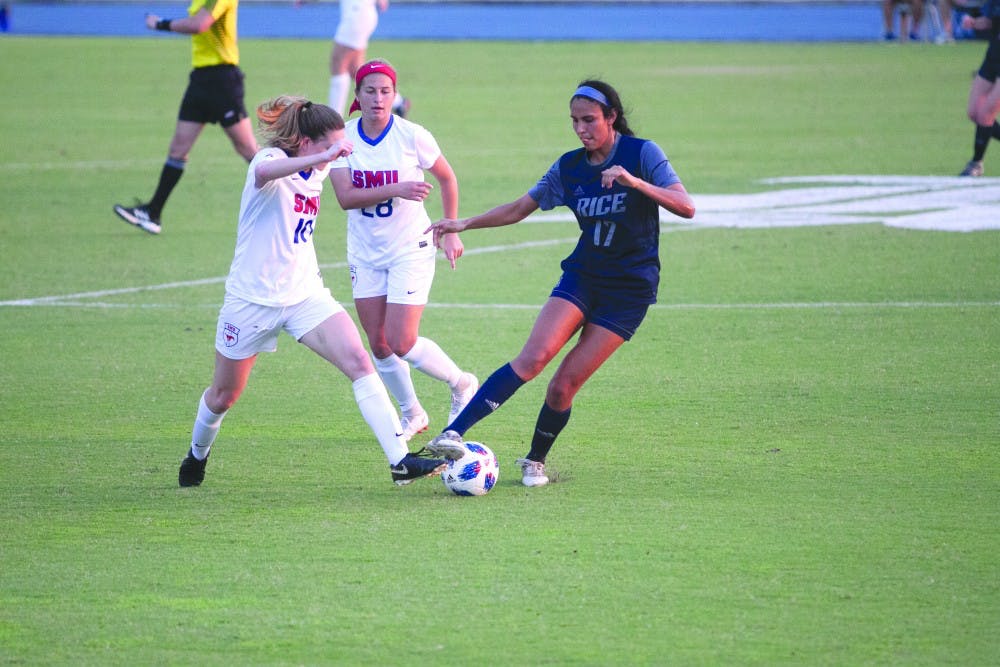 It has been a somewhat slow start for the Rice Owls soccer team over the first three weeks of the 2018 season. Last year, the Owls were once ranked No. 24 in the nation and earned a spot in the 2017 NCAA Women’s Soccer Championship tournament. This year, however, the Owls have lost three of their first four games, including a 5-1 loss to the University of Alabama last Sunday.

Despite this, the soccer team is still optimistic about this weekend’s Rice Tournament, where they will face the University of Memphis and the University of Tulsa. According to senior defender Darcy Mickalow, the primary reason for the Owls’ 1-3 start is that the team has been struggling to take advantage of scoring opportunities.

“I believe our main weakness is our finishing,” Mickalow said. “Everyone on the field can say that they’ve missed a shot or cross in our first four opening games, myself included.”

“We make good runs and move the ball well, but we’ve been struggling to put the ball in the back of the net,” Mickalow said.

The Owls have managed to score just four goals in their four games to this point. Walker said that the team is addressing its offensive deficiency by focusing more on scoring in practice.

“We will be putting in extra time practicing finishing,” Walker said. “We want to focus on not just shooting, but scoring.”

According to Mickalow, despite the struggles with scoring, the team’s has done well maintaining possession.

“I believe our main strength is our ability to keep the ball,” Mickalow said. “When we put together a few passes and can switch the point of attack we are very dangerous. We have been able to exploit teams when we can keep possession of the ball.”

Head coach Nicky Adams said Rice’s weekend opponents,  Memphis and Tulsa, are both incredibly important games to win, mainly because of Rice’s history with them.

“We are excited for both matches,” Adams said. “Both Memphis and Tulsa were longtime rivals [of ours] in the old Conference USA. This is the third year in a row we have played both teams.”

Both Walker and Mickalow said they are most excited for their match against Memphis given the Tigers defeated the Owls last season.

“We are going to have a great home crowd for the Friday game against Memphis,” Mickalow said. “Last season when we went to Memphis we didn't get the result we wanted but now they're coming to us and I'm confident we can get a [good] result.”

The Owls have other goals besides just winning. According to Adams, their primary focus is playing hard for the whole ninety minutes.

“If we don’t score goals it will be hard to win games,” Adams said. “I want us to put together complete games. We have to find a way to finish our chances in the box.”

According to Mickalow, putting together a complete performance would give a huge boost to the team’s confidence.

“We've been able to play and compete with every team we've faced for 45 or 60 minutes but have been unable to have a complete game,” Mickalow said. “If after each game this weekend we can say that we played competitively for 90 minutes and gave it our all, it gives me confidence heading into conference.”

Rice plays its first game in the tournament this Friday night at home against the University of Memphis. Kickoff will be at 7:30 p.m.