H&D set to fundraise for renovations 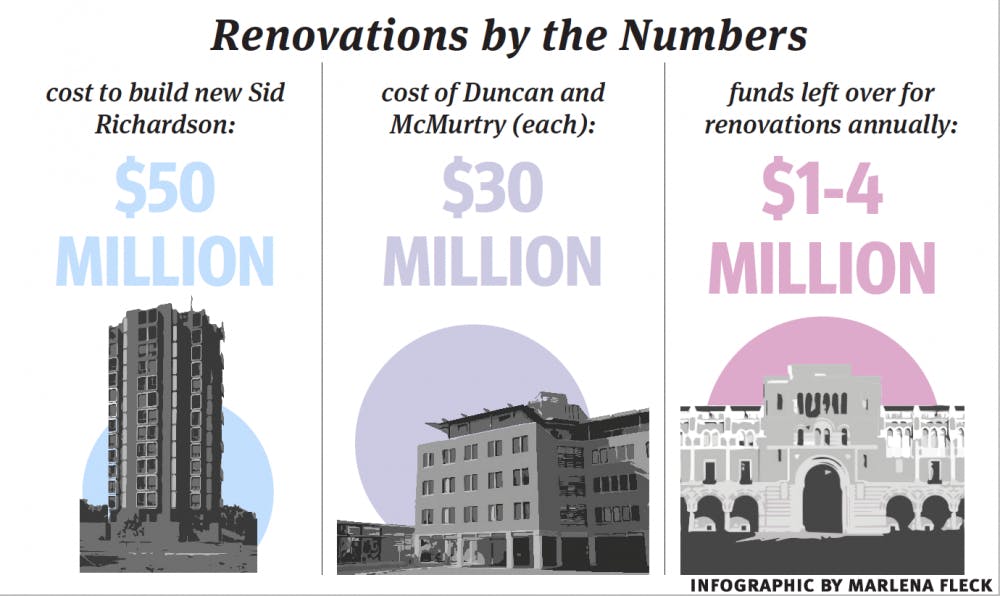 For identical twin sisters Loren and Natalie Goddard, much of their lives has been shared. They both go to Rice. They are both on the track team. But when it comes to residential colleges, the twins decided to part ways.

But Natalie and Loren said it didn’t take them long to realize how different their living experiences really were. Loren is at Hanszen College, one of the colleges originally built more than a century ago, and Natalie is at Duncan College, which was built in 2009.

They both said they love their respective colleges, but agree Hanszen needs work to be done.

The university plans on launching a new funding campaign, at least in part to help fund the many Housing and Dining projects, according to Vice President for  Administration Kevin Kirby.

“It will be a comprehensive campaign that is bigger than our last one,” Kirby said. “The last one raised an estimated $1.1 billion dollars.”

Kirby said funding for big projects comes either from H&D surplus fund or generous donors. But he said funding goals are usually achieved by combined funding from both sources.

Kirby said H&D runs an estimated $1-4 million surplus every year and sets it aside to fix up serveries or dorms at the residential colleges. These “capital improvements” include smaller projects like new plumbing at Lovett College and big projects like the rebuilding of Hanszen New Section.

Kirby said once H&D has determined the needs and set their priorities, they must get the approval of the provost, the president and the chief financial officer, in addition to the board of trustees.

“The senior university administration, including the president, must approve all projects over $1 million,” he said. “Then the project is sent to the board of trustees for the final approval.”

He said the next step is to create a design team by hiring a construction firm and lead architect who is approved by the Buildings & Grounds Committee of the Rice Trustees.

“The architect selection process at Rice is pretty rigorous,” Kirby said. “It’s no accident that it looks the way that it does. Every great architect in the world has either worked on this campus or wants to work on this campus.”

Giving a broad overview of the current conditions of the colleges, Kirby said Duncan, McMurtry, Brown, and Jones colleges on the north side are in good shape, especially considering the recent renovations at the latter two colleges. On the south side, Kirby said renovations at Will Rice, Lovett, Baker, and now Sid Richardson colleges have set the colleges up to be in good condition.

But the accumulated surplus is usually not enough to fully fund big projects and tends to be supplemented by generous donations. For instance, the building of Duncan and McMurtry was  funded by two $30 million donations. Additionally, the $50 million new Sid Richardson building will deplete H&D’s surplus fund, delaying the rebuilding of their next major project on Hanszen.

“Hanszen needs to be next,” Goddard said. “Hanszen has waited long enough.”

Hypothetically, Kirby said a residential college could seek funding from specific alumni of their colleges. But he said the university’s funding model is more complicated than just reaching out to wealthy alumni since the university tries to coordinate their philanthropic efforts.

“It’s not quite as simple as ‘Hey, let’s go ask the five most wealthy Hanszen alums and ask them for money,’” he said. “We’ll likely ask for money for other things too, to fund a new chair of the Social Sciences of the Texas Policy Lab, to fund a new endowed chair in the English department.”