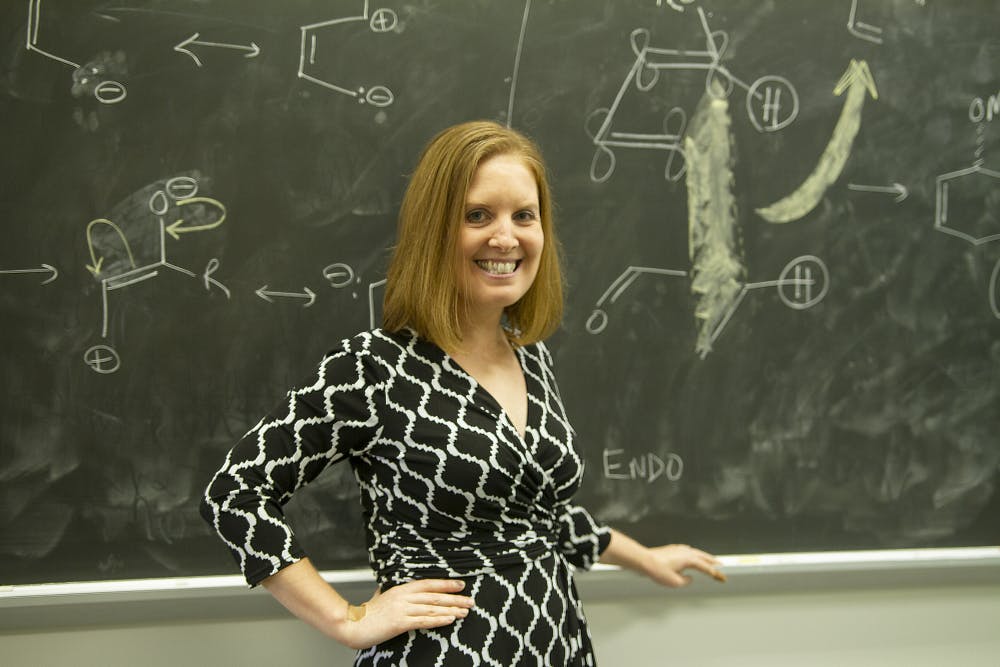 Over 400 students have signed a petition asking the chemistry department to rehire instructor Julianne Yost, a recipient of the 2018 George R. Brown Award for Superior Teaching.

The department did not offer Yost a position for the next acadmic year after she reached the term limit for instructors.

Sai Sriram, who took Organic Chemistry II with Yost this summer, said he published the petition on Aug. 16 on change.org with Baker College sophomore Cory Pan after Yost told their class this academic year would be her last at Rice. He said the fact that Yost doesn’t conduct research as part of her job allows her to be a dedicated teacher.

“I really think that future students deserve to have a professor that’s this committed to teaching,” Sriram, a Baker College sophomore, said.

Instructors at Rice University have limited terms of five years and typically have held their most recently earned degree for fewer than three years when they are hired, according to Rice University Policy No. 201. Yost, who earned her doctorate in synthetic organic chemistry in 2009, said that when she was hired as an instructor in 2011, the term limit was eight years. Anatoly Kolomeisky, who became chair of the chemistry department in July 2018, said the limit changed to five years around 2016. When the change occured, Yost said, she was grandfathered into the eight-year term limit.

“Since this is my eighth year, I was fully aware that this would be my last year as an instructor,” Yost said. “I was not aware as to whether or not my rank would be switched to a lecturer or to one of the other newer teaching professorships that have been established on campus in order to allow me to continue teaching at Rice.”

The lecturer rank, like the instructor rank, is a non-tenure track position intended to “foster excellence in teaching,” according to Policy No. 201. The policy states there is no limit on the term of a lecturer, and those with the title of senior lecturer have demonstrated consistent teaching excellence. The teaching professor rank is another non-tenure track rank where professors teach and also conduct research on teaching practices.

Yost said she was initially hired in 2011 on a two-year contract to teach organic chemistry and medicinal chemistry. Her initial contract was renewed for another two years, and after that, she said, she was employed on one-year contracts. In July 2018, the department informed her that her contract would not be renewed another year.

“There wasn’t a particular position I was hoping for,” Yost said. “I would have loved to have been able to stay at Rice.”

Yost said instructors are sometimes hired for budgetary reasons, and that she was hired in 2011 during an economic recession. Since 2011, she said, the chemistry department has hired three new tenure-track faculty members focused on organic chemistry, and there is currently a posting to hire a tenure-track assistant professor who will begin in July 2019.

Kolomeisky said the chemistry department currently employs 22 tenure-track faculty members and 4.5 non-tenure track faculty, including a part-time employee. Yost is the only current instructor. Kolomeisky, who is not legally allowed to discuss individual personnel decisions, said the hiring of instructors and lecturers is decided by faculty based on department needs.

“On occasion, an instructor may be converted to lecturer, if current needs of the department supports such action,” Kolomeisky said. “These needs are discussed at the faculty meetings. The decision must be approved by the School of Natural Sciences.”

The major distinction between tenure-track and non-tenure track faculty is that tenure-track faculty perform research, according to Yost. Yost said across universities, there is a widely held belief that students should be taught by tenure-track faculty conducting research as they are the faculty creating new knowledge. This view, she said, was one professors expressed at the spring “Why Does My Teaching Suck?” panel.

At the panel, history professor Lisa Balabanlilar said the value of a Rice degree is increased by having research-oriented faculty teach courses. Computer science professor Scott Rixner said research is a critical component in his department.

“My department is driven by research, we’re evaluated by research and we talk about research,” Rixner said. “Every minute you spend on teaching is a minute you’re not spending on research.”

Yost said at the spring panel that tenure-track faculty have to balance teaching with their research.

“I will discuss teaching among the other non-tenure track faculty members in the chemistry department, but there’s very rarely any discussion with anyone who is tenure-track,” Yost said.

Yost said the decision not to renew her contract is not performance-based, but focused on having tenure-track faculty teach courses.

Sriram said he hopes the more than 400 students who have signed the petition can sway the department to rehiring Yost.

“If that many people are willing to attest to the fact that a professor is this inspiring and deserves to continue at Rice, I’d like to think that would accomplish allowing the [chemistry] department to get Dr. Yost to stay,” Sriram said.

Yost said she is now seeking a tenure-track position at a small liberal arts college focused on teaching where she would run a lab for undergraduates to conduct research.

“My bucket list right now includes seeing Will Rice sweep again and enjoying at least one more sporting event with my husband,” Yost, who is a Will Rice College faculty associate, said.

She said she is grateful for every student who signed her petition.

“Even if the wishes of the petition are not met, truly thank you from the bottom of my heart,” Yost said. “I’m extremely proud of all my students and their desire to take action, and hope that they continue to take action and stand up for what they believe in.”