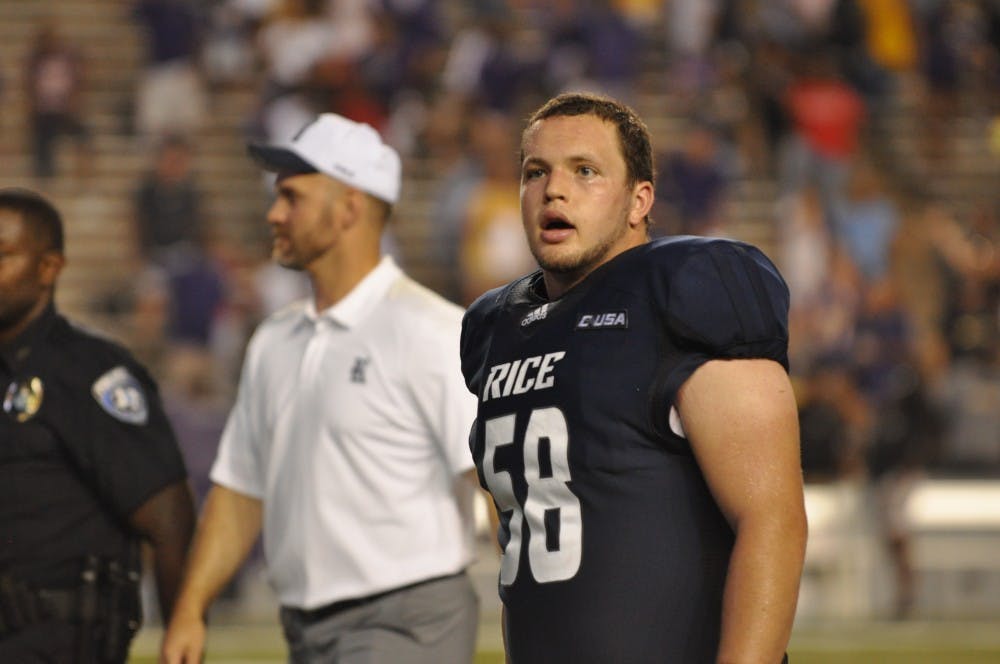 All eyes will be on University of Houston defensive tackle Ed Oliver when Rice takes the field for its first offensive possession on Saturday in the Bayou Bucket.

ESPN is touting Oliver as a potential No. 1 overall draft pick. He’s been called the best player in college football this season. He’s being given outside odds at winning the Heisman Trophy. (BetOnline, a sports betting site, lists those odds as 50-1, largely because a defensive player has not won the award since 1997.)

Shea Baker is a redshirt freshman center on the Rice football team. On Saturday, he will be making his second career start. As a sport management major, Baker spends his typical weekday attending two classes in the morning and football practice in the afternoon. Like most Rice students, he has weekend plans: He will be lining up opposite Oliver throughout the Bayou Bucket, tasked with trying to contain the Cougars’ All-American defensive tackle.

“I always like good competition,” Baker said. “So I think it’s going to be fun.”

Baker won Rice’s starting center job this offseason after new head coach Mike Bloomgren put every position up for grabs. According to Baker, after spending last year on the scout team, transitioning to a starting role has been challenging but rewarding.

“I do a lot more now,” Baker said. “We did a lot on scout even last year, but being a starter, [there’s] a lot more pressure, a lot more reps. But it’s good pressure.”

In his first career start against Prairie View A&M University, Baker and the Rice offensive line did not allow a sack. The Panthers did, however, rack up five tackles for loss. After racing out to four straight scoring drives to open the game, the offense stalled in the second and third quarters. But a late rally earned Rice an opening victory. Baker said he was satisfied with his performance despite some pregame jitters.

“More nerves than normal, but that’s natural for everyone’s first start,” Baker said. “I think going into this game I’ll be a lot more calm.”

Against UH, according to Baker, he’s not going to let Oliver’s talent distract him from sticking to the game plan.

“Gotta prepare to go against a good opponent but not let the fact that he’s a good player deter me from doing what I do best,” Baker said.

Although Rice heads into the UH game as a 21-point underdog according to Bovada, a sports betting website, Baker said the Owls are confident they have a chance to pull off the upset.

“This game is a little bit bigger than normal because it’s a crosstown rivalry,” Baker said. “I think we’re going into this game expecting even more of ourselves: To play perfect, get our assignments right, just grind and strain.”

Even with Oliver lining up across from him, Baker said he will have just one thing running through his mind when he jogs onto the Rice Stadium field to snap the ball to senior starting quarterback Shawn Stankavage.