“Puzzle” affords a deserved spotlight for Kelly Macdonald, but nothing else shines 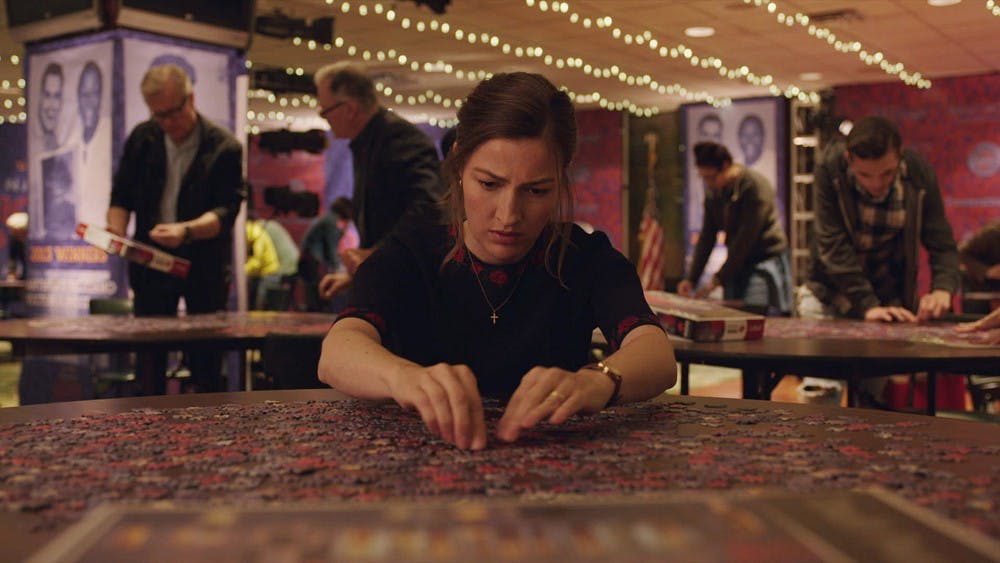 There’s not much to solve in Marc Turtletaub’s new film, “Puzzle.” The film follows Agnes, a suburban housewife who can best be described by the word “beige,” as she realizes her independence and self-worth through – you guessed it – jigsaw puzzles. It’s fitting that the catalyst to her change is as surprisingly quaint as both Agnes’ character and the film’s premise.

After receiving a thousand-piece puzzle as a birthday gift and finishing it in a matter of hours, Agnes leaves the drab safety of her home and braves a train ride into New York City for the first time in years in her journey to buy another. It’s there that she stumbles upon Robert, a champion puzzler, and agrees to partner with him for a national jigsaw puzzle competition. Doing anything beyond menial housekeeping is apparently too risqué for her to tell Louie, her doting but fumblingly misogynistic husband, and the lies begin to pile on.

Agnes, portrayed by Kelly Macdonald, is the centerpiece of the film’s charm. Beige she might be, but the film does not overstretch itself by forcing unnatural character development. Instead, we are delighted by her soft-spoken rebellion. The best moments of the film transpire between Agnes and her sons, who are struggling in their own ways to break free from the suburban mold. One wonders whether he should even go to college, and the other never even had a chance to consider it, given the too-familiar financial burden of tuition and his lackluster grades. Macdonald’s portrayal of Agnes is lovely, and the film leans on the complexity in her oft furrowed brow and warm eyes to transform “Puzzle” from cliché drivel to something with substance.

Unfortunately, “Puzzle” has little else going for it. It’s bogged down by an unnecessary love interest and lazy writing. Robert’s character is not only two-dimensional, it’s also annoying. He lounges about, bemoaning a daily catastrophe while doing nothing with his own life – except for the yearly puzzle competition, evidently – and is as transparently sexually frustrated as a high schooler. As charming as Macdonald is, she can’t force chemistry, and the result is something akin to ordering a nice steak and receiving three floppy fish sticks on a bed of soggy reheated frozen fries. The plot line takes up precious run time and screen space, lugging the viewers along for the ride.

There is little in “Puzzle” that might resonate with a college student, except perhaps to remind us of our parents. This story has been done before and better. If you’re looking to be inspired by a story of a middle-aged housewife revolting against her patriarchal chains, maybe pick up “The Awakening” by Kate Chopin instead. It’s basically the same story and at least when the main character walks into the water in that tale, something interesting happens.