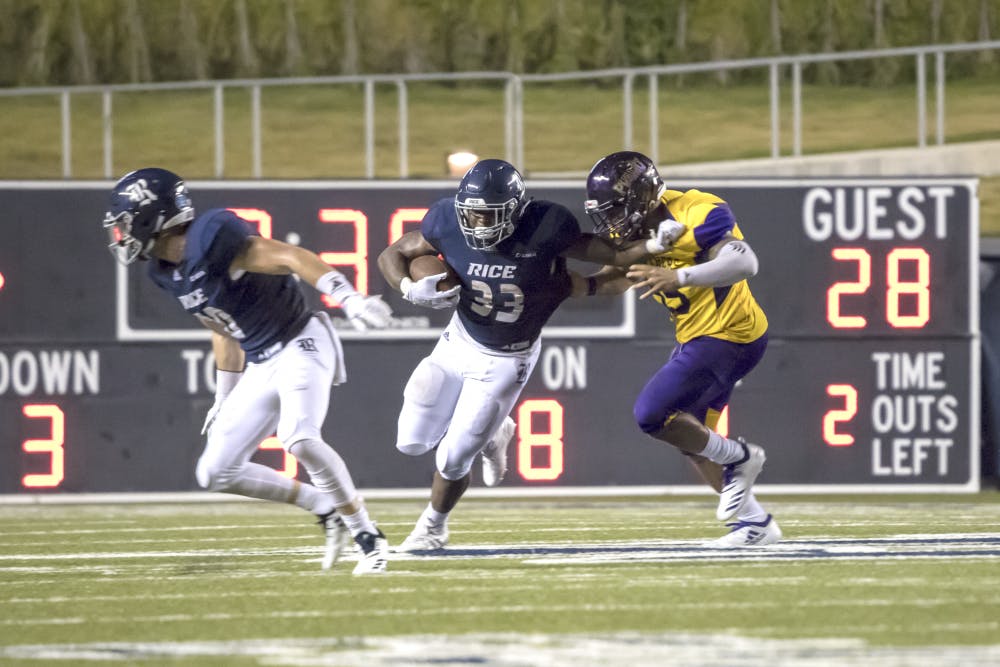 In his opening statement to reporters after Rice’s 31-28 victory over Prairie View A&M University, head football coach Mike Bloomgren let out a sigh of relief. It wasn’t a blowout, but Bloomgren began his head coaching career with a victory in a wild back-and-forth affair thanks to a last-second game winning field goal by senior kicker Jack Fox.

Early in the game, it the Owls raced out to a big lead. Rice’s first offensive possession lasted nearly eight minutes, as the team drove 86 yards for a touchdown. Reminiscent of Bloomgren’s ground-and-pound offenses at Stanford University, the Owls established a power running game with a running back combination of junior Emmanuel Esukpa and senior Austin Walter.

Rice scored again in the first quarter on its second drive, this time on a touchdown run from Esukpa. Following a failed fake extra point that resulted in an incomplete pass by Fox, the Owls led 13-0 — a lead they maintained through the rest of the first quarter. Bloomgren said this was all according to plan.

“I mean from day one we've talked about pounding the rock and controlling the clock,” Bloomgren said.

Going into the game, Bloomgren made it known that he would be playing two quarterbacks: graduate transfer Shawn Stankavage and junior Jackson Tyner. The two shared playing time in the first half.

The Owls were able to tack on a field goal early in the second quarter to make it a 16-point game, but after that score, the offense stagnated and the defense struggled. Prairie View scored three unanswered touchdowns to end the half.

Stankavage started the third quarter and did not leave the game after that. Even though neither quarterback threw for more than 50 yards, according to Bloomgren, Stankavage helped provide the Owls with points, so Bloomgren stuck with him.

“He was more productive. His two drives in the first half ended in touchdowns,” Bloomgren said. “I just went with the feel and sometimes that’s what you do.”

However, the Panthers’ momentum continued into the second half. They scored the only points of the third quarter, extending the score to 28-19 in their favor.

Fox, who plays both punter and kicker, was able to keep Rice in the game with his well-placed punts. In the third quarter alone, Fox hit three punts that pinned the Panthers inside their own seven-yard line or closer. Fox said his success was largely due to good fortune.

“The punts inside the 10 and five [yard lines], like you just have to get really lucky,” Fox said. “So I think luck was on our side tonight. I also think [special teams coordinator] Coach [Pete] Lembo called a really good game special teams wise.”

Bloomgren, on the other hand, did not downplay Fox’s performance.

“I guess the only knock I got against [Fox] right now as he didn't complete his pass attempt [on the failed two-point conversion],”Bloomgren said. “So, he's not a Heisman candidate, but he sure is a Ray Guy [award for the nation’s best punter] candidate and anything else to do with his leg.”

Though the Owls went into the fourth quarter down nine points, Esukpa said the team knew that they could close the gap. According to him, it started with the team’s mindset.

“We've been through so much and this type of adversity is just something that’s easily overcomable,” Esukpa said.

On Prairie View’s first drive of the final quarter, Rice’s defense made a play that changed the game. Sophomore defensive end Anthony Ekpe sacked and stripped the ball from Prairie View’s quarterback, and the Owls recovered on the Panther 25 yard-line. The first turnover of the game for either team led to a touchdown run from Walter that brought the Owls within two points.

On the very next possession, junior defensive tackle Roe Wilkins forced another Panther turnover, again sacking and stripping the quarterback. This time, Prairie View retained possession, but with the Panthers set to punt, a bad snap forced the Prairie View punter to take a safety, tying the game at 28.

Rice could not do much with their next possession, but Fox once again pinned the opponents, this time on the two yard-line. The punt likely would not have pinned the Panthers so deep without Rice converting a fourth down earlier in the drive that helped the Owls advance into opponent territory. Prairie View did not generate any offense from there and punted as well. Bloomgren said he talked to his offensive coordinator Jerry Mack about the decision to go for it on fourth down.

“It's the point in the game where it would be a very different conversation right now if we hadn't got [the fourth down conversion],” Bloomgren said. “[Mack] said, I think we go for it.”

Rice got the football back with just over four minutes left in the game, and the Owls did not give the ball back. Rice ran the clock down to two seconds, took a time-out, and Fox came on and sent the kick right through the middle of the uprights. Game over.

The student section was almost full for the opening game of the season. After the victory, the players went over to the section and celebrated with their fellow classmates. Esukpa said he had a message for the students that came out to the game.

“I want to say thank you for coming out,” Esukpa said. “Hopefully y'all come next week. That's big. Just seeing the fans after a walk off field goal, that's the best feeling in the world.”

Bloomgren said he was happy to get the first win under his belt and establish his brand of football.

“I'm really glad that our culture showed through tonight and our guys fought forever,” Bloomgren said.

Rice’s next game comes against the University of Houston in the Bayou Bucket rivalry game on Saturday at 11 a.m. at Rice Stadium.