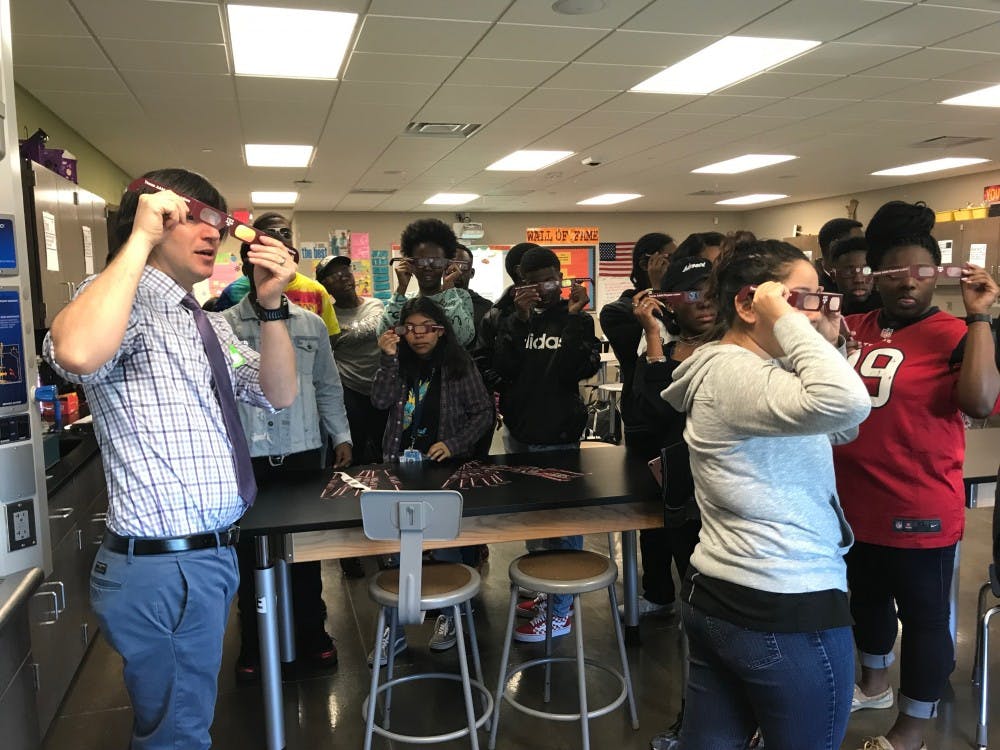 For Michelle Tran, a biochemistry and cell biology major, it’s important to “give back” as a member of the Women in STEM club to encourage young girls to become interested in science and engineering.

Today, Tran is a senior at Sid Richardson College and will soon enter an M.D.-Ph.D. program focusing on cancer research. However, there was a time in her past when she felt discouraged from pursuing her interests in science by her peers.

“I was the only girl in Science Olympiad club at the very beginning of high school,” Tran said. “At the first meeting, when we did introductions, I was laughed at by guys in my grade and it dissuaded me. I actually waited until junior year to go back to the club and by that time, I had developed more confidence. After I joined, more women started joining and I became a leader in the club. I just saw how the snowball effect can really help.”

The Women in STEM club strives to inspire school-age girls through interactive and fun activities to explore science and engineering interests. For example, the club recently participated in the Girls Exploring Math and Science event at the Houston Museum of Natural Science, hosting a hands-on activity to demonstrate how to build a circuit.

The club also mentors students at Young Women’s College Preparatory Academy, a middle and high school in the Houston Independent School District located in Midtown, on their science fair research projects. Tran assisted a small group of female students investigating how effective different brands of sunscreen were in protecting surfaces from ultraviolet light.

“They had a lot of different questions [for their projects], so it was helping them narrow down to what is the most interesting question -- something that is new that hasn’t been asked before,” Tran said.

Through working with the students on the science project, Tran also had the opportunity to share how the students’ research might be applied in the real world. Since her second year at Rice, Tran has volunteered at The University of Texas MD Anderson Cancer Center doing research on immunotherapy for ovarian cancer; she was able to talk to the students about this experience.

“I talked to them about ‘Oh, you’re interested in [ultraviolet] light, maybe you could become interested in melanoma research,’” Tran said. “It’s nice for students in high school to see women in the next steps, so they can find role models and things to emulate.”

Another organization at Rice that is actively engaged in science outreach targeted at school-aged students is the Civic Scientist program organized by the Baker Institute for Public Policy. The program centers on bringing scientists from Rice and the larger Houston community into local middle and high schools to talk about careers in science.

According to Sharon Tsao, a research associate at the Baker Institute, from 2015-2017, the Civic Scientist program visited 2,200 students at 28 different schools in the greater Houston area. Sixty percent of those students were female and over 70 percent of the schools were Title I eligible, indicating a high percentage of students from low-income families.

The content of the presentations that scientists deliver to classrooms for the Civic Scientist program depends on teacher needs and the students’ backgrounds, including demographics, science level, knowledge of higher education and class size. In some cases, scientist speakers supplement a specific part of the regular classroom curriculum, relating topics to their research and other real-life applications for science and technology. For example, in a recent classroom visit, Dan Cohan, an associate professor in civil and environmental engineering, spoke about particulate matter pollution in an Advanced Placement environmental science class at Westside High School.

“Scientists have shared what initially sparked their interest in science, challenges they overcame along the way — for example, being a minority — and their current research,” Tsao said. “One of the Civic Scientist program’s biggest goals is to show students how science is an important part of our society, so we challenge the scientists to convey that passion.”

The length of the scientists’ visits to classrooms varies from 30 to 90 minutes with ongoing Q&A throughout the talk, encouraging students to actively participate. In addition to the speaking part of the visit, the scientist will occasionally do demos in the classroom.

“Recently, Dr. Michael Cone, an instructor of physics and astronomy, visited South Early College High School and brought several demos relating to light and optics. [In one demo] he demonstrated the electromagnetic spectrum through the use of a large 2-foot infrared mirror with a heating element. We have also had a graduate student, Blake Sutherland, extract DNA from peas with a biology class at Clear Lake High School,” Tsao said.

Bringing speakers from the Civic Scientist program into Houston classrooms has informed students about studying science in college and the “positive implications” of that experience, according to San-Pei Lee (Wiess ‘15), a biology and environmental systems teacher at Heights High School.

“My students start being more aware of their own futures and the possibilities and become more motivated to toil towards a clearer goal,” Lee said. “My seniors in an environmental science class especially enjoyed [associate teaching professor of biosciences] Dr. Scott Solomon’s stories about his research and were inspired by his unique passion for science and the natural world. My lessons consequently became even more relevant and significant to their learning.”

According to Lee, the Civic Scientist program has also encouraged minority groups to pursue educational paths in STEM by increasing their engagement with science and engineering and sharing strategies to deal with barriers to success.

“When [assistant research professor of biosciences] Dr. Pamela Constantinou Papadopoulos spoke to my women empowerment club, Ladies of Power, my female students gained confidence that STEM was just as approachable as other subjects,” Lee said. “To all my students, science seems less foreign when adults share their successful experiences on overcoming challenges.”