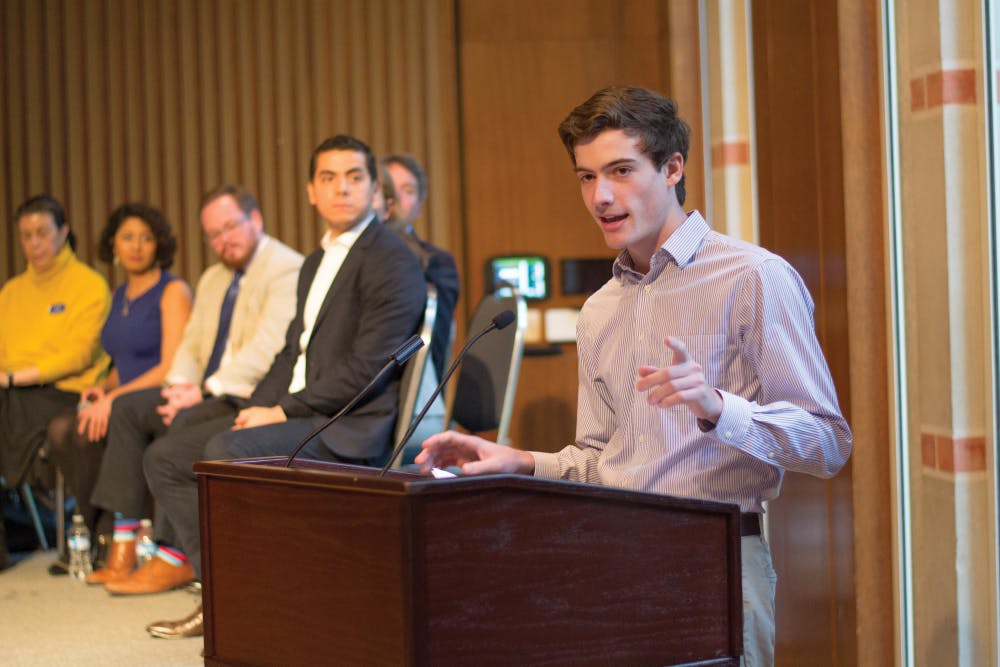 Two weeks after the March for Our Lives, the Rice Young Republicans and Rice Young Democrats hosted a candidate town hall on gun violence in America, though no Republican Party candidates attended.

The Facebook page for the event stated a goal of hosting both Democratic and Republican elected officials to discuss solutions to gun violence, but among the panel of seven political candidates were six Democrats and one independent.

Franz Brotzen and Hannah Meeks, who helped host the event, both said they were disappointed by the lack of Republican attendance at the town hall, despite invitations extended to politicians from both parties, according to Meeks.

Although several Rice Young Republicans officers did not respond to multiple requests for comment, Rice Student Association President Justin Onwenu, who also organized the event, said both the Democratic and Republican campus clubs helped in reaching out to candidates.

Meeks, a Hanszen College freshman, organized a Rice Call to Action event against gun violence on March 24 that she said was only attended by a little over a dozen people. She said the Rice student turnout to this weekend’s town hall remained poor, possibly as a result of student apathy, heavy end-of-semester workloads and the presence of only one political party in the panel.

“I can't particularly blame Rice students for not showing up since we only had Democratic candidates who are running for office, so the event probably wasn't super appealing,” Meeks said. “Not a single Republican [panelist] came to our event, which I think is the attendance problem we should be talking about.”

The panel was comprised of Democrats Laura Moser, Carol Alvarado, Steven David, Todd Litton, Lina Hidalgo and Rita Lucido, and independent Benjamin Hernandez. After opening statements from Brotzen, the president of Rice Young Democrats, the panel answered questions that were submitted online or prepared by the student organizers.

Quiet chuckles filled the hall when the panelists were asked via online submission how they would increase bipartisanship.

“I can tell you that on our side of the aisle, we look for bipartisanship,” Alvarado, the sitting representative of Texas’ 145th Congressional District, said. “But unfortunately, I think the other side of the aisle is too caught up with trying to earn that A+ on the [National Rifle Association] report card. And if you have people in office like that, you’ll never have bipartisanship.”

Litton, Moser and Alvarado said the fact that most Americans support universal background checks and some level of gun control provides a common ground upon which to move forward. The panelists also emphasized the importance of electing responsive public officials.

The panelists also spoke about restriction of gun access for domestic abusers. Ariel Hobbs, a student organizer from the University of Houston, asked the panelists what they would do to close a close a loophole allowing those with a history of domestic abuse to own weapons.

Moser said 46 percent fewer women get shot to death by their partners in states requiring background checks for handgun purchases. Fourteen states and the District of Columbia have implemented such laws, according to website Everytown for Gun Safety.

"We need a federal law,” Moser said. “If you move from [a certain state to another], you could get whatever gun you want, and you could do whatever you want to your partner. That is not acceptable, and that is something we need to do in Washington to protect women."

Marcel McClinton, a student at Stratford High School, said he was accused of cyberbullying after reporting a student for threatening online posts and asked the panelists what they would do to educate administrators on dealing with reports of violence.

“There is no excuse for an educator or someone in leadership to punish someone for reporting something that is potentially dangerous,” David said. “ But I also think it’s really important that we fund schools, to make sure that we get quality educators. We need to get teachers pay raises to make sure that classrooms are safe places where students don’t feel the need to [be violent].”

The panelists also addressed the effect of gun violence on low-income, minority and LGBTQ populations.

“Implicit bias is real. White privilege is real,” Litton said. “We need to deal with it in an open and honest way across our community. This is the most diverse city in the country. We have a responsibility to work together.”

Most of the candidates, including Alvarado, Moser, Hidalgo, David, Hernandez and Litton, attended the March for Our Lives event in person. Lucido and Fletcher said they had been busy with prior commitments that day, but reiterated their support for the movement.

Nia Prince, a Sid Richardson freshman, works for Moser’s campaign and attended the town hall. Although she was disappointed with the low student turnout, Prince said the town hall was a valuable opportunity for constituents to engage with political candidates about gun violence, a relevant issue in recent months.

“I just felt that it was a great opportunity to support the students behind March for Our Lives while also taking the time to hold the people running for office accountable,” Prince said.

“In order to create change, we must participate in the system that gives us the power to do so,” Meeks said in her closing remarks. “Everyone on this stage, all our representatives, they are our employees. They work for us. Movements do not happen overnight, but by raising our voices and refusing to be silenced, we can show our employees that we demand meaningful gun safety reform.”