​CTIS to move to weekdays, take place at residential colleges 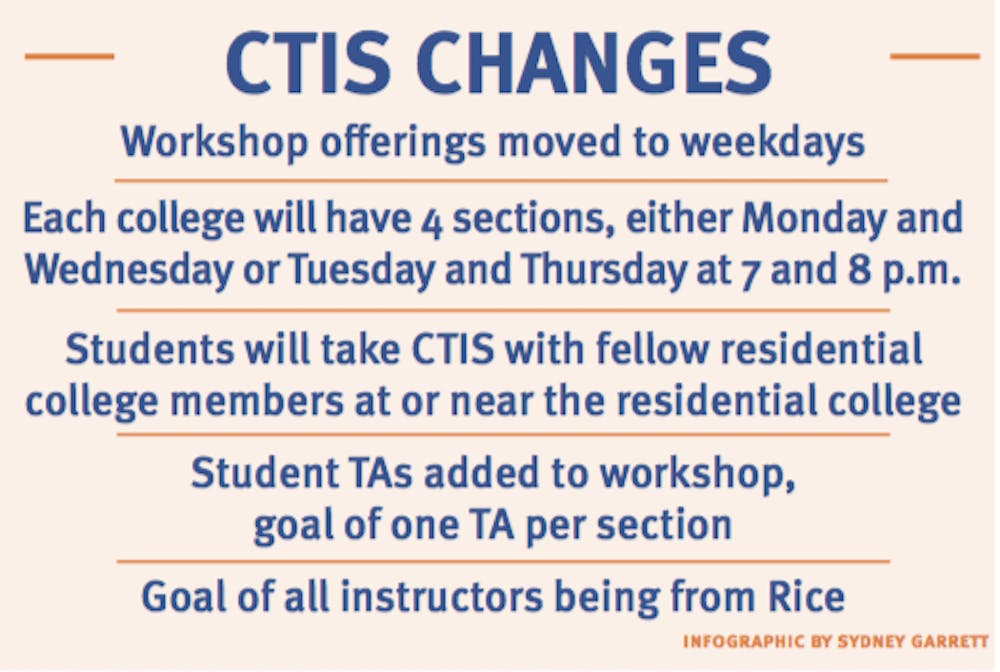 Changes to next year’s Critical Thinking in Sexuality workshop include moving the course offerings to weekdays and hosting sessions within residential colleges in response to student feedback, according to Dean of Undergraduates John Hutchinson and Director of Sexual Violence and Title IX Support Allison Vogt.

“Students were interested in having these sessions in the company of people that maybe they know better, because the conversations can be challenging,” Hutchinson said. “The feeling from our student advisors as well as from new students and from the staff was that this would facilitate more comfortable conversations in these workshops.”

According to Vogt, each residential college will offer four sections for the weekly CTIS workshop — either Monday and Wednesday or Tuesday and Thursday, beginning at either 7 p.m. or 8 p.m. Students will attend the course with fellow college members in classrooms at or near their own colleges.

The move from weekends to weekdays aims to address students’ logistical complaints about taking the course on weekends, Hutchinson and Vogt said.

Vogt said that rules for attendance will be the same as last fall; students will be required to attend every session or else request alternate assignments for missed classes. Students who fail to do so will receive a registration hold until they complete their required sessions.

Hutchinson and Vogt both said they did not perceive problems with student attendance and participation in the weekend class, and the changes were made to ease course scheduling for students.

“Attendance was a lot better than I thought it was going to be, and I think the students engaged in the way that we would hope,” Vogt said. “It’s just that I know that they weren’t pleased about having it on the weekend.”

Nia Prince, a member of a student working group collaborating with Vogt on the CTIS changes, said the working group discussed low student participation and involvement, which Prince said was an issue that a lot of classes had. Additionally, working group member Ellery Parish said she did not think the group had decided whether to move sessions from weekends to weekdays.

“The issue with freshmen is that a lot of people are in lab at a school like Rice,” Parish, a Duncan College freshman, said. “So that’s why placing a CTIS class during the week causes difficulties.”

Vogt said CTIS workshops will begin the first week of the semester and last for five weeks, so students are less likely to have evening exams that conflict. According to Hutchinson, students rarely take more than one evening course during the week and thus should be available for at least one of the sections.

According to Parish, the working group, composed of about six students and as many faculty members, has met once this semester and will meet again on April 19. Prince said the main goal of the working group is to make sure the Office of Sexual Violence and Title IX Support can change the course in a way that reflects the concerns of the students.

“The main question that hasn’t been answered for sure yet is which parts of our feedback are within the limits of scheduling and the administration’s goals for the course,” Prince said.

Other changes to the workshop include using volunteer student teaching assistants for each section and attempting to hire all CTIS instructors from the Rice community.

This year, two CTIS instructors were from off-campus organizations. Vogt said students wanted TAs and instructors from Rice because they better understand Rice culture and can apply topics to campus life. However, Vogt said if not enough Rice teachers have the necessary training, the Office of Sexual Violence Prevention and Title IX Support may have to look off campus for instructors.

One part of the workshop that will not change is the curriculum, Vogt and Hutchinson said. According to Vogt, the course must follow federal curricular guidance.

“We can change how we present the information, try to make it as interactive as possible, but the core information has to be about domestic violence, sexual assault, bystander [intervention] and consent,” Vogt said. “I think that the curriculum itself is pretty good, it’s just that we’re going to try to make it a little more robust.”

Vogt and Hutchinson both said they did not receive any feedback asking to leave out existing content, but students did express a desire for more topics to be covered.

“A lot of the situations and a lot of the things we did were very clear-cut,” Parish said. “The importance is going into the gray area and determining your actions when the solution might not be completely clear.”

Vogt said there is no room to add additional topics to CTIS at this point. According to Vogt, students would need to express that they want to expand the workshop.

“The CTIS workshop was voted upon by the Student Association,” Vogt said. “Should students wish to expand the course that would need to be discussed with the SA and the [dean of undergraduates].”

Hutchinson said tension arose during initial discussions of CTIS about what information would be taught to students. According to Hutchinson, the creation of this year’s mandatory five-week CTIS workshop alongside an optional, semester-long Lifetime Physical Activity Program course was meant to balance these concerns.

“The structure of the program is a desire to respond to both sides of that tension, to make sure everybody gets what they have to get,” Hutchinson said.

Hutchinson said CTIS should be taught in every university and every high school in the country.