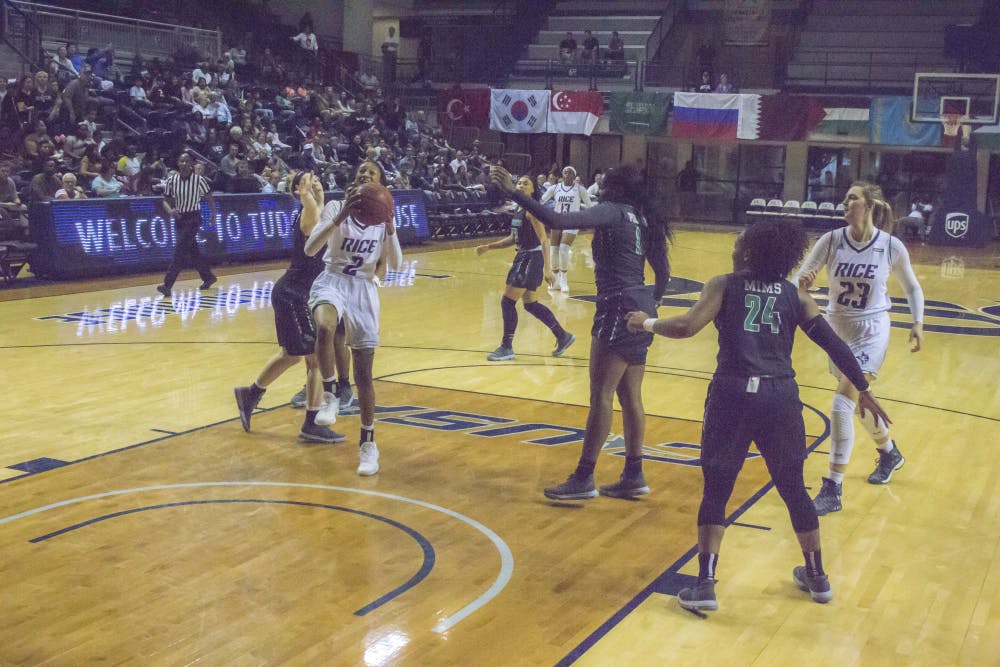 As the final buzzer sounded on Saturday to seal a 47-45 win over the University of North Texas, it marked the conclusion of the most successful regular season for the Rice’s women’s basketball team since 2004-05. The Owls’ 20 regular-season wins eclipsed last year’s total of 18 and secured the team the No. 5 seed in the upcoming Conference USA tournament, their highest seeding since 2012.

Rice started the season on a tear, recording a 17-3 record through its first 20 games for the best start in program history. But since the second week of February, the team has posted just three wins against five losses, all at the hands of conference rivals.

Head coach Tina Langley said that injuries have played a significant part in the team’s recent struggles, but the team avoids dwelling on the past.

“We’ve battled a lot of injuries the last few games; we’re out there with a lot of people playing very sore,” Langley said. “[But] we don’t spend a lot of time in the past. Our mindset is about the process, what we have to do right here in the moment.”

The Owls’ focus now shifts to the postseason. This Wednesday, they take on No. 12-seeded Old Dominion University in the opening round of the C-USA tournament. The tournament has 12 participants in a four-round bracket. The top four seeds receive a first-round bye. As the top seed playing in the first round, Rice will face the lowest-seeded team in its first game, with a potential first-round win advancing the Owls to a matchup the against No. 4-seeded Middle Tennessee State University. If the Owls manage to make it all the way to the championship game on Saturday, they will have played four games in four days. According to Langley, this intense schedule makes resting the players paramount to success.

“It’s really [the coaching staff’s] job that we rest [the players] well,” Langley said. “I think it’s the most important thing that we do going into the tournament, [so] that they can be sharp mentally and physically as [they] take the floor.”

Throughout the season, the Owls have relied on a combination of prolific outside shooting and tenacious defense to outscore their opponents. On the offensive side, Rice ranks first in C-USA with 8.5 3-pointers made per game and is second in 3-point accuracy at 37 percent. Defensively, Rice has held their opponents to just a 28.5 percent success rate from 3-point range, and their overall scoring defense places them in the conference’s top three.

The Owls will likely look to sophomore guard Erica Ogwumike and junior forward Nicole Iademarco to provide the backbone of their offense, as they have done all year. Ogwumike was named to both the All-C-USA First Team and the All-Defense Team, leading Rice with 17.2 points, 9.4 rebounds, and 2.0 steals per game. Iademarco secured a spot on the All-C-USA Second Team, leading the team with 66 made 3-pointers and ranking second with 13.5 points per game. Together, the two players accounted for 46 percent of the Owls’ total points scored and were the third-highest-scoring duo in the conference.

All in all, senior guard Wendy Knight said the team is confident that they will perform well in the tournament.

“I feel like we’re definitely going to be prepared,” Knight said. “We’ve scouted all of these teams pretty well and we know we’re capable of beating every single team out there.”

One potential concern for the Owls in the Frisco-based tournament is their home-road splits: Though the team was 12-1 at home, they were just 8-7 on the road. But according to Langley, the team believes the neutral site shouldn’t affect their play too much.

“I actually think we’re pretty excited about it,” Langley said. “I think there’s a security when you’re at home, but I think the longer we play together and the more that we have [non-home] games, that we continue to get better.”

In their only matchup this season, Rice defeated Old Dominion 53-45 on Jan. 28, a game in which the Owls trailed 23-16 at halftime before outscoring the Monarchs by 15 in the second half on the back of 64 percent 3-point shooting. On the whole, Old Dominion struggled through the regular season, recording an 8-22 record that places it last among the teams in the conference tournament. Despite the Owls’ advantage on paper, Langley said they aren’t taking anything for granted.

“The conference is tremendously tough,” Langley said. “Everybody that you play can beat you, so we’re going in with a fresh start.”

But more than anything, Langley said the team is excited to return to postseason play.

“We want this season to last as long as it can: This is a tremendous group of people that really enjoys being together,” Langley said. “We just want to go down [to Frisco] and do our very best.”