Why Does My Teacher Suck? Panel Discusses Teaching at Rice 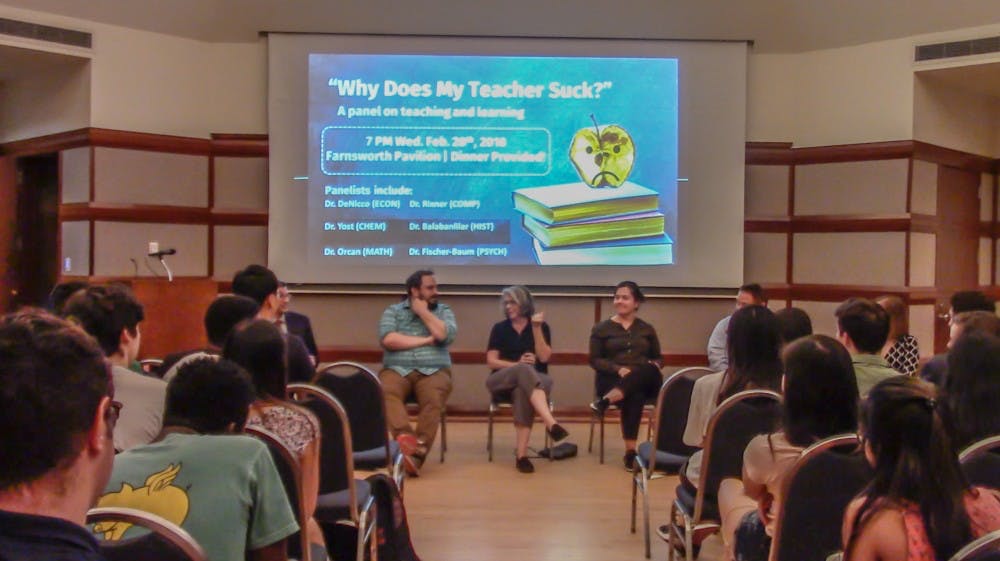 Students filled Farnsworth Pavilion with laughter and debate as they listened to Rice University professors describe everything from bad lectures to tenure at a “Why Does My Teacher Suck?” panel Feb. 28.

“We seem to get really hush-hush about important systemic issues with teaching, like its place in the tenure process, our systems of evaluating teaching and quite simply, answering why a place like this has poor teachers,” Subramanian said.

While discussing Balabanlilar’s evaluation, which criticized her for commenting on Donald Trump during class, DeNicco expressed his views on teachers giving their opinion in class.

“People always think professors can't give their opinion. As long as they let you give your opinion back, I think it’s fine. As long as you don't shut down what they're saying, I think it’s OK. I honestly do," DeNicco said.

Rixner also took the opportunity to defend his teaching style, which was criticized in the displayed evaluation for being “downright hostile.”

“You being uncomfortable is not the same as you not learning, period,” Rixner said. “I’m not there to be your friend. That’s not my job. My job is to teach you as much as I can.”

Balabanlilar stressed that teachers do care about evaluations and incorporate changes based on them, and she encouraged students to give constructive criticism in their evaluations.

Yost echoed this sentiment during a post-panel interview.

“The evaluations that you write at the end of each semester are not just for other students, but we read them, we care about them and we try to change based on them,” Yost said.

Subramanian displayed the anonymous results of questions he had asked panelists about potentially sensitive topics such as whether they discuss teaching with their peers often, feel supported by their peers to improve their teaching and feel that teaching should be a larger priority for professors.

All three of the professors from STEM departments said the faculty in their departments didn’t talk to each other about teaching. When asked to clarify, Dr. Yost pointed out a discrepancy between the attitudes of tenure-track and non-tenure-track professors.

“A tenure-track STEM professor, while teaching is absolutely one of their responsibilities, they also have their research group, whereas non-tenure track, their main and only responsibility is to teach,” Yost said. “I will discuss teaching among the other non-tenure track faculty members in the chemistry department, but there’s very rarely any discussion with anyone who is tenure-track.”

DeNicco said there is a lot of pressure for tenured professors to get published in top-tier academic journals, which incentivizes them to focus on research over teaching. Balabanlilar said the value placed on research is important in distinguishing a Rice degree.

“Your degrees are in part validated by the research your colleagues and my colleagues are publishing,” Balabanlilar said.

Rixner also acknowledged that the emphasis on research in certain departments might affect the amount of time professors devote to teaching.

“My department is driven by research, we’re evaluated by research, and we talk about research,” Rixner said. "Every minute you spend on teaching is a minute you're not spending on research.”

DeNicco suggested that some faculty are more disposed toward research and should be allowed to focus more heavily on that aspect of their careers rather than teaching, while others stressed the importance of integrating teaching and research with each other.

“I think that good teaching and good research do go together and support each other,” Fischer-Baum said. “You get ideas while you’re teaching that inform your research.”

Balabanlilar warned that if Rice were to allow research-oriented faculty to stop teaching, it would not be able to compete with other top research universities.

“We will not be in the same club any longer,” Balabanlilar said. “Your degrees will not mean as much. You will not have the prestige of a Rice degree.”

Professors unanimously emphasized that their best teaching practices involve encouraging meaningful student interaction with the material, whether through Balabanlilar’s required reading journals or Fischer-Baum’s data analysis exercises. As for areas for improvement, several professors acknowledged that they tend to get overly excited about their topics, causing them to talk too fast or inhibit student participation.

“We all know how learning takes place, and it’s not always because we’re talking,” Balabanlilar said. “We know that, but it’s just really hard to shut up.”

Professors lightened the mood when they were asked to describe their experiences with giving bad lectures.

“You know when it’s not going well, but the thing is, you can’t leave,” Rixner said amid laughter from the audience.

According to Fischer-Baum, even good lectures don’t always translate into strong student responsiveness.

“I’ve learned that student energy back isn’t always the most indicative of how well it’s going,” Fischer-Baum said. “If you give the best possible lecture on the Monday after Beer Bike weekend, you’re never going to get that positive feedback.

The first of two student submitted questions was whether the instructors ever got bored of the material themselves. Panelists said they did not get bored of the material, though DeNicco and Yost said after lecturing the same subject multiple times daily, their focus shifts more toward the nuances of their presentation.

“You just work on other things,” Yost said. “You just tweak it a little bit to try and improve each and every time you teach it.”

The final question asked teachers about the best advice they had ever received about teaching. There was a common theme among panelists in giving students time to slow down and process information.

“People don't slow down enough at Rice,” Balabanlilar said. “Part of my teaching has come to be how to be a reflective adult, how to be an adult who actually takes time to just chill.”

Deyanov said that he would have liked to see more than two student-submitted questions, and maybe even a panel of students alongside the professors.Yost also said the panel could be improved with more student participation.

“A lot of students showed up, and I just would like to have known whether or not they had specific questions for us in addition to the two that we had,” Yost said.

Subramanian said he liked asking teachers about their perceived weaknesses in the classroom.

“As a student, sometimes it's hard to believe a teacher ever reflects on their teaching,” Subramanian said. “Seeing each of the panelists being very cognizant about their areas of improvement was both refreshing and reassuring as a student.”

According to the panelists, Rice is better than most research institutions at encouraging good teaching.

“Rice is so exceptional,” Balabanlilar said. “This is head and shoulders above the teaching at other research institutions, in my experience. There’s so much more thoughtfulness in the administration, in the departments. Rice is exceptionally good.”