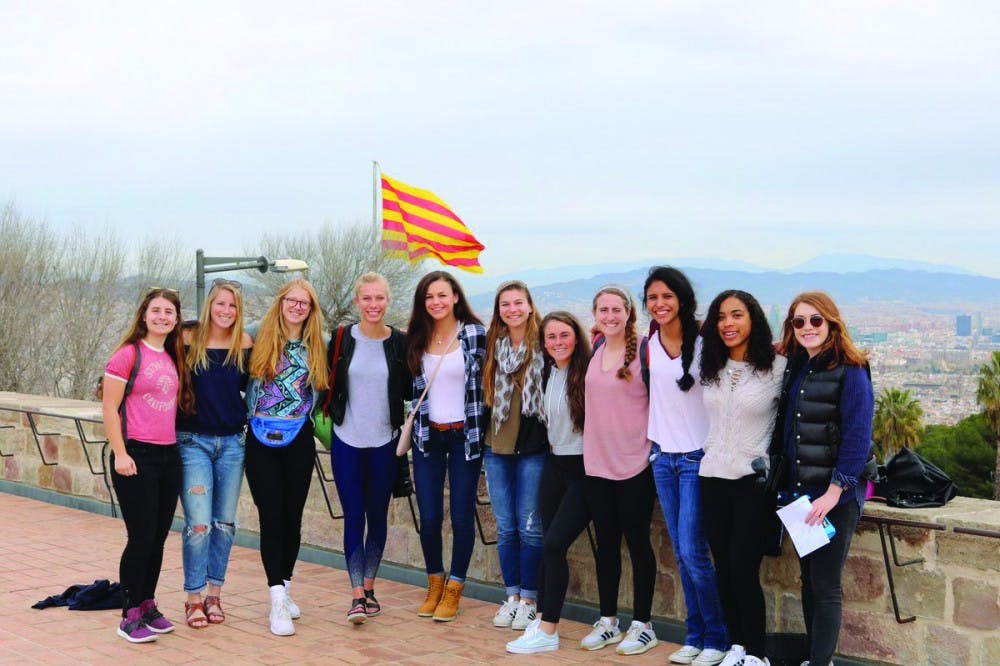 Members of the soccer team pose at Barcelona’s Castell de Montjuïc during the second day of the trip. The castle, which dates back to 1640 and currently serves as a Barcelona municipal facility, was one of many sites the team visited in both Barcelona and Valencia during the trip. Photo courtesy Rice Athletics.

Over spring break, the Rice soccer team took its first ever international trip, a weeklong journey to Spain. They had the chance to compete against various Spanish teams and also visited many famous sites in Barcelona and Valencia.

Although the players agreed the matches were a blast to play, most of the team said their favorite part of the trip was sightseeing in Spain. Some of the places they visited included Mercat de la Boqueria, a large market in downtown Barcelona, and Camp Nou, home to prestigious FC Barcelona. Junior Marissa Topolski said she relished the opportunity to visit the country.

“You only go to Spain once in a while,” Topolski said. “The sightseeing is something I may never get [to do] again.”

Sophomore Louise Stephens said visiting famous sites of Spain was the best part of the trip.

“I [had] never seen Barcelona or Valencia,” Stephens said. “Playing was definitely really fun, but I love being in the city and seeing what the country had to offer.”

Many players’ favorite destination was the Barraca Toni Montoliu restaurant in Valencia, a farm-to-table restaurant known for its “Original Spanish Paella.” After a nine-mile bike trip earlier in the day, the team was able to finally rest and enjoy the famous Valencian rice dish. Junior Annie Walker said she enjoyed experiencing the local atmosphere.

“What I really liked was seeing how different the culture is, especially at the paella farm,” Walker said. “It was so much fun to hang out with my teammates and with people who live here.”

Because they enjoyed the trip, head coach Nicky Adams said she would like to take more international trips in the future.

“I think these trips are great cultural experiences, but also a great bonding experience for the team,” Adams said. “There are so many places where soccer is so significant, and we can go on and on on the possible places where we can go.”

All of the players on the team had suggestions for where to go next; the most popular were France and Germany.

The Owls opened up the playing portion of the trip with a scrimmage against RCD Espanyol, a Spanish Primera División club based in Barcelona. In the 11th minute, sophomore goalkeeper Maya Hoyer punted the ball to Topolski, who in turn scored in the right side of the goal to take a 1-0 lead. The Owls continued to play strong defense throughout the rest of the game and defeated the Spanish club team 1-0.

According to Walker, competing against Spanish teams is very different than playing college matches in the United States.

“The Spanish teams are a lot smaller than the teams we play back home, so we can use our size and strength more,” Walker said. “However, they are a lot more technical, so it makes us focus on staying close when defending, pressuring quickly and having them not play around us.”

For their second match, the Owls played el Club de Fútbol Femenino Marítim, a professional team based in Valencia. Despite junior Dominique Mazero’s goal in the 18th minute, the Owls were unable to keep up their momentum. CFF Marítim scored three more goals to win the game 3-1.

Hoyer said the main aspect of the Spanish teams that set them apart was their fiery passion for the game.

“Every team has passion no matter who you play, but these teams, you saw in their eyes, movements and how they communicated,” Hoyer said. “They always encouraged each other no matter what.”

According to Adams, this experience helped the team improve their skills on the field.

“It was really good for our team to see something different,” Adams said. “What we’ve been trying to work on is problem solving on the field, and I believe that seeing different playstyles allowed us to see new obstacles.”

The Owls returned to Houston this past Saturday and hope to use some of the skills they learned from the trip for the upcoming 2018 season.