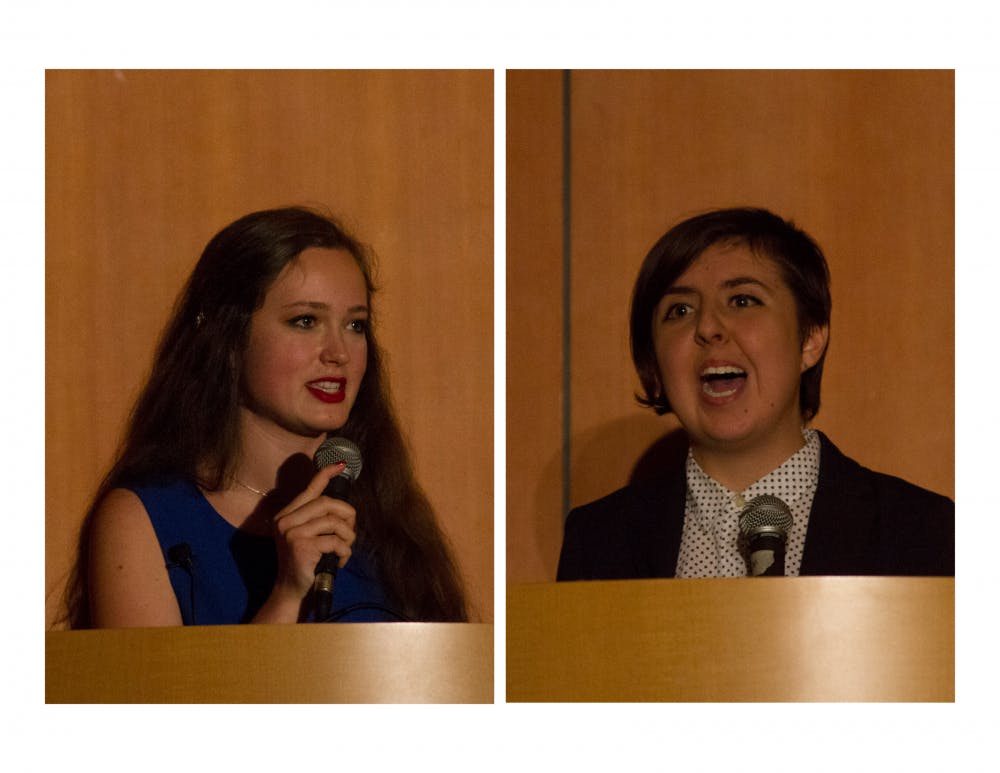 Candidates for internal vice president participated debated issues ranging from student disillusionment to the purpose of the Student Association on Friday before the Thresher’s SA presidential debate.

Candidates Grace Wickerson and Juliette Turner each said that they are concerned with increasing the diversity of perspectives in the SA, but they have different ideas about how to do so.

Wickerson (who uses gender-neutral pronouns) said in their opening statement at the debate, said that their platform would focus heavily on making it easier for students to share ideas with the SA.

“I think it’s amazing that we go this amazing school like Rice, with such intelligent, passionate...people who could just have an amazing impact and yet we still feel like we don’t have the voice to make a change,” Wickerson, a Brown College sophomore and senator said.

Turner, a Duncan College sophomore, said that she would be focused on gathering ideas directly from students, rather than pursuing her own projects.

“I know that she is hardworking, compassionate, diligent and would make an amazing IVP from my work with her as SA senator, after interviewing her, and after reviewing her platform,” Onwenu said in the post.

In the Thresher’s debate and interviews, each of the candidates laid out specific policy changes that they would like to see implemented if they are elected.

Wickerson’s platform is based on the slogan, “MAPT to the future,” in which “MAPT” is an acronym which stands for Mentorship, Active Participation and Transparency, according to their Facebook page. Among their other proposals are a “Pitch a Project” program that would allow anyone to submit an idea to the SA and present it, as well as a petition process that would force the SA to discuss issues that had received a certain number of petitions.

In an interview with the Thresher, Turner proposed a system whereby SA members regularly meet face-to-face with students, both in scheduled popups and spontaneous meet and greets, and limiting the number of projects that SA committees work on simultaneously. At the debate, she stated that she will host biweekly dinners with new student representatives.

“I don’t think the problems that Rice faces need to necessarily be fixed by the people who are in the SA Senate,” Turner said. “I think that you, the people who are involved in different clubs and different organizations, have the power to fix problems, and as long as the committee heads can go out and say so how do you want to fix this problem or what are you doing to already fix this that is how we can effect real change and this is something I would improve.”

Wickerson started in the SA as an NSR, and now serves as a Senator. During their time as senator, they have introduced legislation to increase the number of minors offered at Rice, create a task force to investigate sexual health at Rice and increase the accessibility of sexual health resources, and create a chief of staff position within the SA.

When asked who the candidates prefer as SA president next year, Wickerson said that they would prefer to see Ariana Engles in the position.

“I think they’re all amazing people,” Wickerson said. “But I would personally really love to see Ariana as president. I think that a lot of the issues she’s focusing on are very present, and I think they need to be addressed. She’s also just done a lot that I really respect her for.”

Turner declined to choose a preference, and said that all of the candidates seemed equally qualified to her.

“We can’t go wrong,” Turner said. “We are truly blessed as a student body right now to have such amazing candidates up and willing to spend the time, take the blows to their gpas, deal with the stress, and put themselves in a very vulnerable position to run for this role.”

Turner also started in the SA as an NSR, and is currently serving as a senator. She has proposed legislation that would endorse a letter written by the SA meant to encourage the administration to formalize a stance on freedom of speech with respect to speaker invitations to campus.

Apart from being a member of the SA, Wickerson is the founder and CEO of nonprofit organization Kickin’ Violence, which aims primarily to use martial arts to eliminate violence among youth according to the organization’s website. They are also a cofounder of SolverIQ, an organization which attempts to match job seekers with employment opportunities according to its website.

Turner is the executive director of nonprofit Constituting America, which, according to the organization’s website, aims to provide education about the Constitution of America. She is also the current chairwoman of the Rice University College Republicans.