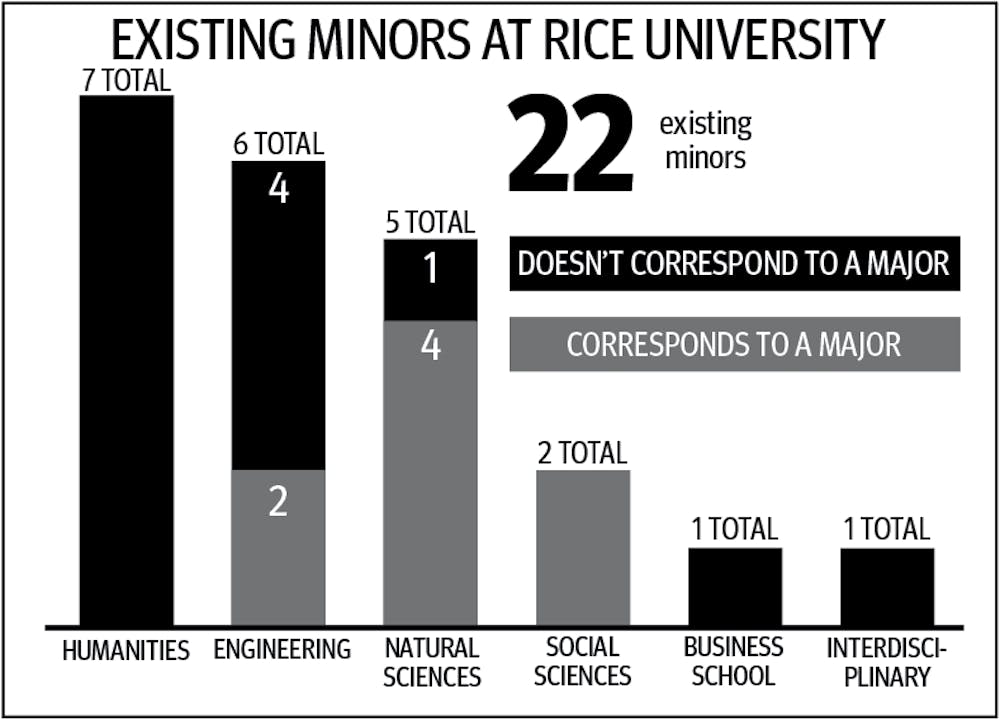 The Student Association Senate passed a resolution calling for the creation of more minors with only one abstention at Monday’s meeting.

Departmental leaders cite a preference for original minors that foster new discussions, drops in major enrollments and the preservation of academic philosophy as reasons for the existence of fewer conventional minors at Rice University.

Sanat Mehta, a new student representative who introduced the legislation on Feb. 5, compared Rice to peer universities such as Duke University, Cornell University, Johns Hopkins University and Vanderbilt University, and reached the conclusion that Rice offers fewer minors than them, especially those that correspond to majors.

“We have a minor in museums and cultural heritage [and in global health technologies] which is really specific, but in more traditional-sounding subjects that we have majors for, like chemistry, economics, political science, computer science, that have minors almost everywhere else, somehow we don't have them here,” Mehta, a McMurtry College freshman, said.

The legislation encourages each academic department to designate a subset of its majors as minors and receive approval for its minors from the Committee on Undergraduate Curriculum. It excludes the Schools of Music and Architecture from its call for creating minors and notes some majors may not be suited for a corresponding minor.

The legislation also states that some students feel pressure to pursue a double major to pursue multiple subjects and employers and graduate programs would likely view a minor as a sign of competence in an additional area. In addition, it suggests the creation of a new minor would not require departments to create new courses and that prospective students may choose a peer institution with more minor offerings.

According to Mehta, adding minors is essential to providing students with more options.

“The biggest problem is that under the current system a student who wants more recognition in certain areas feels pressured to double major, which restricts options for electives,” Mehta said.

Departments can establish minors by presenting a proposal to the Committee on Undergraduate Curriculum, according to committee Chair Susan McIntosh. The CUC only reviews proposals and does not initiate them.

According to Associate Dean of the School of Humanities Lora Wildenthal, early in the process of permitting minors, faculty were given to understand that they should not create mini versions of majors, but this is not the case anymore.

The School of Humanities offers seven minors including cinema and media studies, and medical humanities, according to the list of departments and programs on the general announcements. None of the seven minors correspond to majors offered by the school.

“My understanding of it is that Rice [previously] did not have any minors, and so compared to other universities we haven’t had as many years to develop as many minors,” Wildenthal said. “When we did start permitting minors, the first minors to be developed tended to be new combinations that didn't exist before and the humanities minors reflect that. None of the humanities minors line up one to one with an existing department or center.”

Wildenthal said she took the issue of Rice’s lack of minors to the dean of humanities’ monthly meeting of chairs and directors.

“The reactions ranged from ‘It would be fine with us, hadn’t really thought about it,’ over to ‘What's the point of the effort? We'd rather spend our time creating new offerings that reveal heretofore unnoticed clusters of expertise across several of our departments,’” Wildenthal said. “If such minors were established, students who would currently choose the major would no longer choose the major and would choose the minor instead. That fear is out there.”

Wildenthal said she did not object to the diminished number of courses required to complete a minor. The current history major is a minimum of 30 credit hours, translating to ten courses, according to the department of history website.

“We're all delving into a subject to a greater or lesser degree,” Wildenthal said. “It's arbitrary. A 10-course cutoff is arbitrary. You can't say, ‘Oh, it's irresponsible, in my opinion, to have a six-course minor and this is inadequate preparation.’ Guess what, a major isn't adequate preparation either. That’s what grad[uate] school is for. But we all only have so much time in the traditions of higher education in this country.”

According to English department Chair Rosemary Hennessy, the department has not seriously considered an English minor because of the difficulty of predicting the impact of introducing a minor on the number of students enrolling in English courses.

“There's a loss in terms of what we understand the English major offers students, going off to do all kinds of different things,” Hennessy said. “It sort of pushes some of the value of that experience into the shadows, in the background of your skill set. We want to build enrollments in the major, want to draw more students to that, and we're also articulating for the public and incoming students — what's the value of an English major? Here at Rice, it's so hard to get that message through because of Rice's reputation and the dominance of the STEM fields.”

Associate professor of English Scott Derrick said introducing a minor could pose the risk of degrading the value of the major.

“A slightly different way to put it,” Derrick said. “Do you want to provide an English major on the cheap? We already require less courses from double majors. You're equipping people to say, ‘Well, you know, I have a minor in English, I have basically an English major. Couple of courses, who cares? I can do what the majors can.’”

The focus should remain on creating non-traditional majors, according to Hennessy.

“There's something intrinsically conservative about the minor,” Hennessy said. “You aren't really doing anything new. You're actually just taking the courses you would take as a major, just fewer of them, just diminished requirements. Now all these programs and centers are trying to do something new. They’re trying to have discursive spaces that aren't contained in conventional departments.”

NB Shaper, a Baker College freshman, said they were interested in pursuing an English minor but are now instead considering an English double major.

“It’s a larger commitment to have a double major than to pick up a major and a minor,” Shaper said. “I do think that it would be nice to have a secondary course of study that’s not necessarily as intensive as a major.”

“Creative writing is the part of English that always interested me,” Hickey said. “A creative writing minor or certificate would allow me to more meaningfully share my experience with future employers. The individual classes are so valuable and I feel like formally connecting them would encourage more people to investigate them seriously.”

History department Chair Carl Caldwell said the department had discussed a minor at several points but did not take it to a vote.

“CUC was very clear when the new procedures were put in place that it did not support minors that were simply smaller versions of majors,” Caldwell said. “The process for approving minors reflects that position, and creates a huge obstacle to any department interested in proposing a minor. There was frankly very little incentive even for those of us strongly in support of a minor in history — which would reflect the uncontested and uncontroversial practice of most other research universities in the U.S. — to pursue it.”

Caldwell said that he supports what most other universities across the United States already have in place.

“It seems to me that Rice should be willing to recognize this commitment and work with a minor degree, which would accurately reflect what the student has actually done,” Caldwell said.

Chemistry department Chair Matteo Pasquali said he believes the issue of creating a minor had not come up in his three-and-a-half years as chair because of lack of demand, but that he would not be opposed to considering it.

“I don't see a practical impediment,” Pasquali said. “I don't see somebody from faculty saying we can't take this on because we don't have the teaching resources, because, at least that's my anticipation, we will be using courses we already teach. I do think that there is a more pedagogical or philosophical perspective that the Rice faculty has always had, to privilege learning over certification.”

According to Pasquali, there is a concern that students may take courses to obtain the title of a minor rather than to learn about the subject.

According to Mehta, the sport management department is in a unique position which makes it unsuited for a corresponding minor.

Mehta said he believes there should be a minor in computer science despite the fact that it could make over-enrollment an issue.

“Computer science enrollment has been exploding everywhere,” Mehta said. “Computer science is so integral to a lot of other fields that it would be useful for those students to be able to minor in it.”

Economics department Chair George Zodrow said that the department had not discussed the issue of an economics minor much because of low demand for it.

“We are not surprised that we have not had many students inquire about or express interest in an [economics] minor, given the existence of [an economics major, a mathematical economic analysis major, a financial computation and modeling minor and a business undergraduate minor],” Zodrow said.

According to mathematics department Chair Michael Wolf, the demand for a mathematics minor resulted in its creation. Mathematics is one of the five minors offered by the School of Natural Sciences, all of which correspond to a major except for the environmental studies minor, according to the list of departments and programs on the general announcements.

“We had [a] considerable number of students who were interested in learning a significant amount of mathematics, but did not have the inclination or the available time to pursue the full major,” Wolf said.

“If you can construct a minor that actually provides some content and you really think there's an anticipated demand, then it makes sense,” Natelson said. “One reason we did this was because we kind of had the perception that there are people who like physics and are curious about things like quantum mechanics but they don't want to major in it, and we want to basically give them a way to satisfy their intellectual interests and get at least some kind of acknowledgement that they've stretched themselves to do it.”