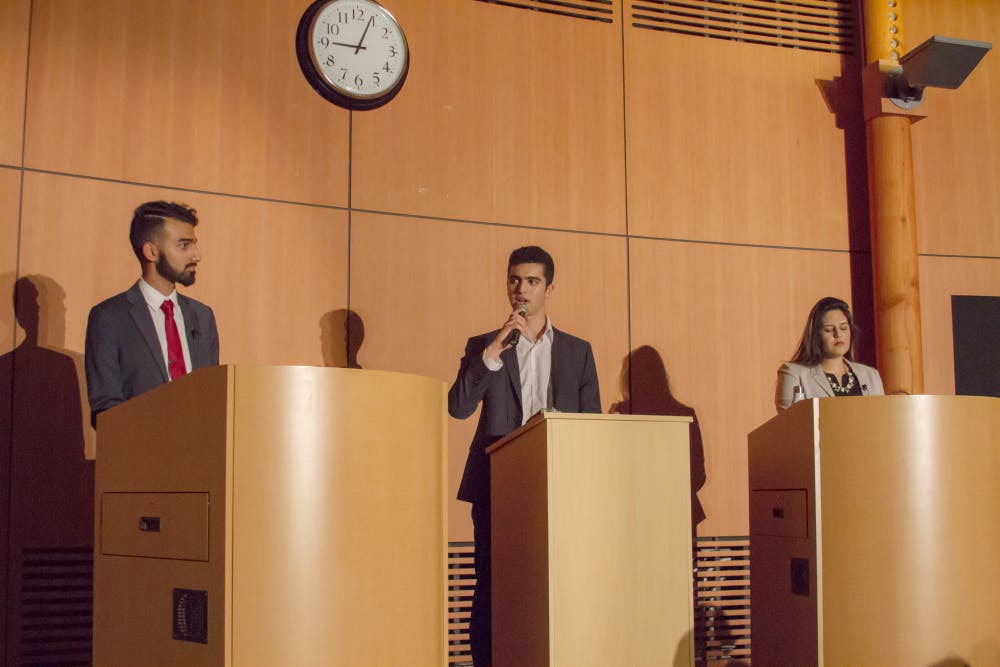 As three Student Association presidential candidates prepared for their opening statements for the debate hosted by the Thresher last Friday night, students filed in past a large paper banner painted #letgillisdebate. Voting for all SA candidates begins tomorrow, Feb. 22 at 8 p.m. and closes Feb. 26.

The Thresher cited candidate Morgan Gillis’ lack of a serious platform in their controversial decision to not invite him. Gillis posted a letter on Facebook contesting his exclusion from the debate and held a town hall forum last Saturday to discuss his platform of changing the mascot to a “Despicable Me” Minion, building a fence around campus and providing free Chegg accounts.

“My ideas may be harder to implement than the other candidates’ ideas, but this does not detract from their legitimacy,” Gillis, a Baker College junior, wrote.

While candidates Rohan Palanki, Mahdi Fariss and Ariana Engles all agreed academic inclusivity, undocumented students and student engagement were priorities, they disagreed on which issue is most pressing for the student body.

Fariss said the most urgent issue is the lack of student engagement, as the least engaged students are often marginalized groups that are engaged with the least.

“If students aren’t engaged, then our ability to actually accomplish our goals is decimated,” Fariss, a McMurtry College junior, said. “So while there are things that are urgent now, that are timely, I believe that the duty of the SA president is to make sure we are fostering a culture that encourages engagement with the values of our community and addresses those problems head on.”

Palanki said Rice must have accessibility not only in social opportunity, but also in academics and well-being.

“It should be accessibility in terms of academics so that each and every Rice student has the equal opportunity to pursue a Rice education,” Palanki, a Jones College junior, said. “It’s accessibility and awareness of these well-being resources, so that they’re not reactionary but rather preventative. Perhaps we need to restructure our approach and perhaps we need to make this campus more accessible to all.”

Engles cited the March 5 expiration date for the Deferred Action for Childhood Arrivals Program and said she would use the presidency to support undocumented students that receive protection under it.

“I know I talk a lot about undocumented students a lot, but I really do think that is the most pressing thing,” Engles, a Lovett College sophomore, said. “March 5 is so close. We need to ensure that all of our undocumented students here at Rice are able to be supported, and I think by and large the Rice administration is able to do that, but I think we need to push, we need to have student buy-in, we need to ensure that every single member of our community feels welcome and supported.”

Current SA President Justin Onwenu endorsed Farris as a value-oriented candidate and Palanki as a project-oriented candidate, citing concerns regarding Engles’ experience as a sophomore and her priorities as a candidate.

Engles’ campaign statement specifically addresses support for DACA recipients, international students and those with recently removed Temporary Protected Status, stressing the urgency of these issues. Engles said she would also like to improve student-athlete inclusion.

“A lot of how I tend to look at issues is students bring them up to me,” Engles said. “So for example with international student [and student-athlete] issues, that was brought up to me. Addressing what Rice students want will take me going to serveries, and talking with students, and saying, ‘OK, I’m hearing this over and over again.’”

Fariss’ platform highlights diversity in faculty and the student body that reflects Houston and the world. During the debate, he said that while strides have been made for refugee and asylum-seeking applicants, a more investigative look into Rice’s recruitment is necessary.

“Without a diverse faculty body, we can’t have teaching that is actually tailored to the diversity of our student body,” Fariss said. “It’s imperative and integral to the success of our students to have teachers that resemble them. I also want to make sure that our recruitment process is actually reflecting the diversity we strive for in our students, to make sure we’re not just looking for it in the admissions but we’re also looking for it in how we recruit and advertise Rice.”

According to Palanki, as the president of the South Asian Society, he sits on the diversity council and has been approached with international student issues. Addressing an SA resolution to support and diversify the international student population, Palanki said there’s room for improvement in recruiting from populations with fewer opportunities.

“Can we make sure that we are catering to populations that may not be able to to apply to Rice or are facing some constraints that are inhibiting them from applying to Rice, versus just diversifying our international population,” Palanki said. “A resolution is really good, but it’s what you do after the resolution that really makes a difference.”

Fariss said the issue of sexual assault education and prevention is especially timely as the new dean of undergraduates will begin their term next semester. Fariss said he wants to ensure that the SA is able to connect students to programs like Critical Thinking In Sexuality and Students Transforming Rice Into a Violence-Free Environment, for which he has been a liaison for since sophomore year, and get them feedback for improvement.

“[We need to make] sure that the dean truly understands how seriously we take the issue of sexual violence on our campus,” Fariss said. “We have great things happening. I’m very excited about them. We need to make sure we have the buy-in from our administrators, our institutional support in our students to make sure those with the expertise are doing what’s right for our community.”

Palanki said the biggest problem with CTIS was that students were not invested in the weekend class times and suggested making improvements to the existing program, by networking with the same organizations Fariss mentioned to create a safer culture.

“The SA should be a leader in making sure that students realize there are resources available and students are also talking about these resources,” Palanki said. “So maybe the SA has to hold a town hall every now and again and say, let’s talk about one specific idea. Let’s talk about sexual violence, or well-being — these ideas that are big, these ideas that impact every Rice student should be talked about more.”

Engles said that while CTIS is helpful, the SA needs to address what upperclassmen know about sexual assault prevention and make STRIVE and similar programs more visible and accessible.

“Continuing to talk about this, continuing to support our other students and continuing to call out anyone who even dares to hurt another Rice student is essential, and the [SA] can definitely do that through discussions at Senate and at college level meetings,” Engles said.

Palanki was a new student representative on the Academics Committee, and as a sophomore, the Jones senator and a blanket tax committee member. Last year, Palanki ran for and lost the SA internal vice president to Sara Meadow in a special election.

He is currently the chair of the SA Academics Committee and working group evaluating graduate school advising, as well as a representative for the faculty committee for undergraduate advising and for parking and transportation. Palanki said the three candidates are similar in terms of experience, as they have each served as senators.

Fariss was also a NSR and served on the Wellbeing Committee. As a sophomore, he was the McMurtry senator, serving on the Vision for the Second Century II Committee and as the senator representative for the Diversity Committee. This year and last, he was the Academic Freedom Group co-chair.

Fariss said studying abroad last semester made him unable to be as involved as he had been in the past, but broadened his understanding.

“Actually being outside of Rice allowed me to get a better understanding of how Rice operates without being biased by my own involvement in it,” Fariss said. “It also gave me the sort of wherewithal and mental framework to just be separated from the insularity a little bit and to think, ‘what really needs to be improved and why do I feel that way about it.’”

Engles was similarly an NSR and served on the Academics Committee. This year, she is the Lovett senator, and serves as the chair of the Undocumented Student Support Services Working Group and task force, the co-chair of the Economic Accessibility Seminar Task Force, and was the co-creator of the working group to explore undergraduate curriculum and autonomy.

Engles said being the only sophomore presidential candidate was an asset to her and Rice.

“No matter what I do, I’m going to have to live with it for a year,” Engles said. “So if I do something and Rice just generally hates it, imagine what I’m going to feel like for an entire year. This is my chance to highlight a lot of issues that are going on on our campus but also outside of our campus, and I intend to use that loudness until the 26th, so I’m going to continue [being loud].”

Gillis said part of the reason why he decided to run was to get voters to take a second look at the other candidates’ platforms.

“Whether or not you think they’re ridiculous, I am saying specific things,” Gillis said. “I’m not saying like, ‘Call for diversity, improve empowerment of student resources’. I want voters to understand what exactly the other candidates are doing. I’m not saying the other candidates aren’t giving specific points, but I want voters to understand what those points are.”

In regards to rebranding the Rice owl to a Minion, Gillis said he would work with Universal Studios as the first university with a mascot based off an animated movie. As to the electric fence around Rice’s campus, he said V2C2 funds could cover the costs.

Gillis said he does not think he will win, but that running has made him realize how much the SA has done and that he would consider getting involved after the race.

“It would definitely be more difficult [to pursue my platform if I didn’t win], because I wouldn’t have clout, like no one’s going to listen to me if I’m not in a position of authority at all, but sure,” Gillis said. “I guess I’d try to push it. I’d go to meetings and speak my mind. I would just try to help in ways I think I can.”