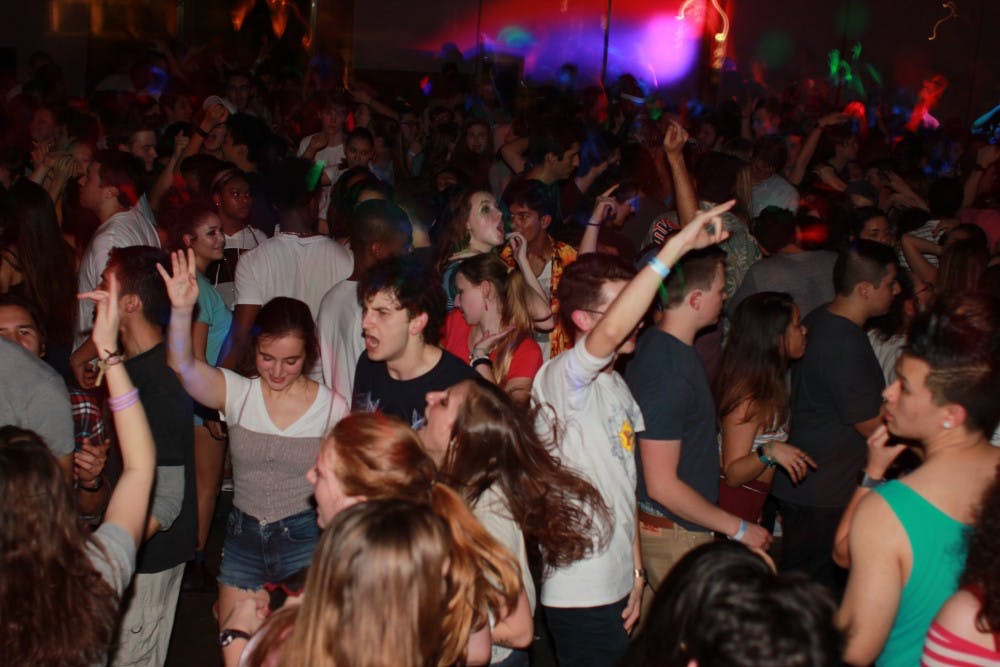 External social Jane Clinger said students were able to enter with no issues until around 11:30 p.m., one and a half hours into the public. Clinger said there was not a specific maximum capacity for the party. Instead, RUPD judged when the public was full and stopped people from entering.

“I would say around 11:30 [p.m.], one of the RUPD officers [said], ‘After this group of people goes in, we’re going to be at max capacity and we are going to have to cut off the line,’” Clinger, a McMurtry College sophomore, said.

According to Rodriguez, when the maximum capacity was reached, officers and party organizers stopped guests from entering the public. People waiting in line were allowed to enter as long as the capacity was not exceeded, Rodriguez said.

Clinger said she and the other party coordinators had to move picnic tables to corral people at the entrance and push them back into the line.

“I don’t think there was a safety issue,” she said. “It was just that people were getting in the way because they were waiting in the line for so long.”

The McMurtry Commons capacity for standing room only with no furniture or stage is 839, while capacity with chairs only is 599 and capacity with tables and chairs is 279, according to Senior Safety Specialist of Environmental Health & Safety Jeff Coleman.

In November, RUPD officers shut down Architectronica, the School of Architecture’s annual public party, in part because party-goers in line outside Anderson Hall tried to force their way into the building.

Youssef Machkas said he and some friends waited in line for Y2K for around 20 to 30 minutes until they decided to leave because the line was not moving.

“Y2K has always been one of my favorite Rice publics since I love the throwback to 2000s music, and the longer I waited, the sadder I got since I felt like I wouldn’t be able to go in,” Machkas, a Sid Richardson College senior, said. “My friends that stayed needed an extra 30 minutes before they got into the public.”

Machkas said that while he feels like publics have been more overcrowded than usual, the main issue is that they get crowded sooner.

“I haven’t gone to as many publics this year as before, but from the ones I have gone to, the lines seem long,” Machkas said. “I think it’s more because people are going earlier than I’m used to, and so it gets crowded sooner.”

Clinger said party coordinators devised a system whereby a volunteer stationed at the exit sent updates to a volunteer at the entrance every time any number of people left the building, allowing attendance to remain under the maximum capacity.

“That pretty much worked pretty well,” she said. “The RUPD officers were impressed by how we were handling it.”

“We knew that there was going to be a really long line because Y2K is one of the more popular publics and were obviously very wary given the whole Architectronica situation,” Clinger said.

Director of Student Activities Kate Abad said the party organizers were proactive in addressing potential problems prior to the public.

“Our typical approach is to make sure during our walk throughs...that we get solid capacity numbers from Environmental Health and Safety and we talk through with the planners how they are going to address managing their numbers,” Abad said. “The McMurtry socials really worked to understand their capacity numbers and to have a plan in place for how to address those.”

In light of ongoing COVID-19 concerns, an on campus commencement is postponed until further notice, according to an email sent by President David Leebron, Dean of Undergraduates Bridget Gorman and Interim Provost Seiichi Matsuda. There will be an online ceremony on May 16, according to Gorman, where graduates names will be read out loud.

Rice accepts 10 percent of applicants for the Class of 2024

Rice University accepted 10 percent of applicants to the undergraduate class of 2024, a slight increase in acceptance rate from last year’s record-low 8.7 percent acceptance rate. Due to Rice’s cancellation of all on-campus admission events in response to the COVID-19 pandemic, accepted students will be invited to virtual events in lieu of visiting campus during the traditional Owl Days and Admit Days.