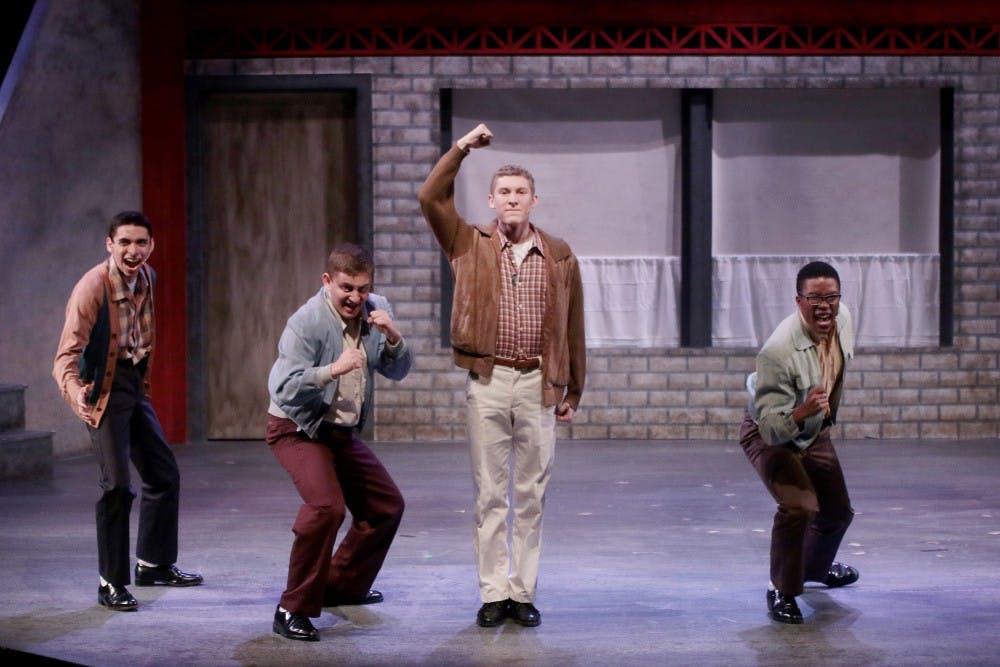 In the five decades since the 1960s, anti-military sentiment has become much more mainstream. It is no longer unusual to see celebrities and other public figures decry the numerous conflicts in which the U.S. is entangled. The dream of martial glory has been so tarnished by our conflicts that generations of Americans have grown up without a collective desire to go to war. The Rice Theatre Program and Rice Players’ production of “Dogfight,” however, is intent on returning us to a time when military service was venerated, in order to look back at the horror and indecency that accompany it. Though the play is a tremendous display of Rice’s acting and musical talent, its content leaves many troubling issues unresolved.

Adapted by Peter Duchan from the 1991 film of the same name, “Dogfight” tells the story of a group of rowdy, testosterone-filled marines about to ship out for Vietnam from San Francisco in 1963. The marines decide to play the titular game on their last night in the U.S., in which the man who brings the ugliest girl to a party wins a cash prize. The play is primarily concerned with “The Three Bees:” Birdlace, Boland and Bernstein, best friends because they lined up together in training. Birdlace convinces Rose, a lonely, somewhat homely San Francisco native, to accompany him to the party. She, of course, eventually finds out why she was invited and gets understandably upset. This is where the play fails to deliver on its early themes: Rather than learning a lesson through Rose’s rejection, Birdlace gives a poor apology and the play moves on to their short romance. Ultimately, one regrets that the play did not more strongly tackle the negative social consequences of military worship and the toxic masculinity of which the dogfight is emblematic.

Despite issues with the script, the Rice Theatre Program and Rice Players’ production features some of the best acting and musical talent that its producers have to offer. Will Rice College junior Kaitlyn Zoeller is amazing as Rose – both her singing and acting display great range, and she hits the emotional beats of the play with a tremendous sincerity. Birdlace, played by Will Rice College sophomore Will Grimme, also has an incredible voice and handles the darker moments of the play well, but has a harder time with some of the more lighthearted scenes. It is much easier to believe his performance in the portions of the play that take place after Vietnam than the portions of the play when he is supposed to be having fun with his fellow marines. Jones College senior Justin Bernard, who portrays seven diverse characters, is another standout, if only for his versatility and charisma. However, the play is at its most powerful during its many ensemble songs, when the cast’s varied singing abilities are balanced by some incredible harmonies and live accompaniment from backstage.

“Dogfight” is also assisted by the Theatre Program’s typically inventive set design and costuming. The set consists of some doors, stairs and a miniature replica of the Golden Gate Bridge, but clever staging turns these into a coffee shop, a club, a bedroom, and the whole of San Francisco. Costumes feel realistic and appropriate for the time throughout, even down to undergarments (which are displayed during several on-stage costume changes). The whole effect is on sparkling display during the dogfight scene, when lighting switches between a lounge singer (Bernard) judging women from the bridge and the rest of the cast dancing below.

The production effort falters only in sound design, where systematic issues make some lines inaudible. As “Dogfight” is a musical and the whole cast is mic-ed, the sound mix is at times uneven for spoken lines, especially for Bernstein (played by Wiess College sophomore Johnathon Berry) and Boland (played by Martel College junior Alan Kim). At times, it appears that mic levels are being adjusted between singing and speaking on the fly, and the effect is slightly disconcerting.

“Dogfight” is an enjoyable spectacle, but only if you can distance yourself from the troubling themes it leaves unresolved. The production and talent on stage do much to create a comfortable distance, but in the end Rose and Birdlace’s relationship has too many issues to ignore. The play, which premiered in 2012, seems unconcerned with dealing with Birdlace’s abusiveness toward Rose, the marines’ casual misogyny or any number of other issues that could be more impactful than the improbable story of their love. Though I do not understand why the Rice Theatre Department and Rice Players chose to produce this musical, they have certainly made a magnificent version of it. I would recommend it to anyone who can look past the play’s troubling themes.