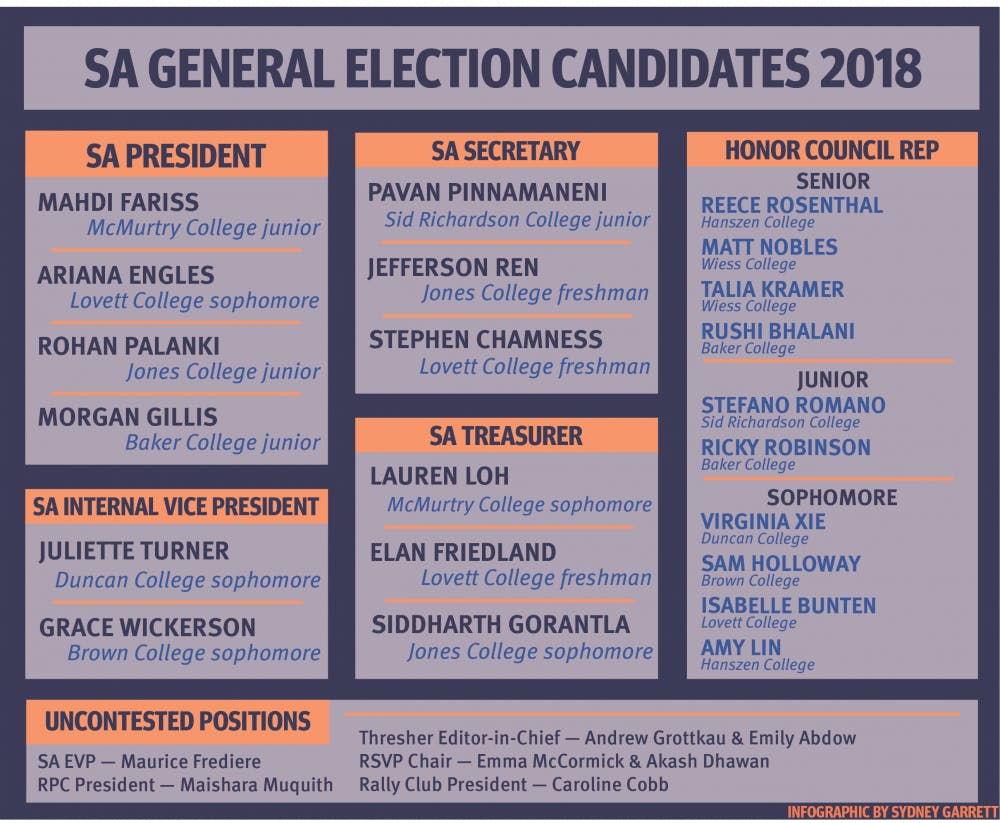 This year's Student Association general election includes four contested races for SA executive committee positions. The candidate list is not official until the ballot is approved by Senate.

Update, Feb. 2, 2018, 7:15 p.m.: According to Director of Elections McKinzie Chambers, the ballot will not be approved until the Feb. 19 Senate meeting, rather than the Feb. 12 meeting to fulfill the timeline set forth by the Student Association Constitution.

Update, Feb. 2, 2018, 1:30 p.m.: Stephen Chamness dropped his candidacy for the position of Student Association Secretary, according to Director of Elections McKinzie Chambers.

Four candidates are vying for the position Student Association president in this year’s general election. To join the race, all candidates turned in petitions by Monday and were found to be eligible to run by Student Judicial Programs, according to Director of Elections McKinzie Chambers.

Candidates may drop from the ballot before its pending approval at the SA Senate meeting at Senate's Feb. 19 meeting. Any eligible student may run as a write-in candidate, as has been the case in two of the past four elections for SA president. The external vice president position is the only SA executive committee role that is not contested, in sharp contrast with last year’s general election, in which only two positions were contested and there were no candidates for internal vice president or treasurer until a second round of elections was held to fill the roles.

No petitions were submitted for KTRU station manager, Campanile editor-in-chief or University Court chair. A special election can be held after the general election to fill these positions. If no candidates emerge for a special election, then Senate will fill the vacancies, according to the SA constitution.

This year’s general election follows last year’s tumultuous cycle, which included UCourt finding the elections committee in violation of three sections of the SA constitution and the resignation of the director of elections during the elections process.

Campaigning by candidates is not permitted until 10PM on Feb. 12. The candidates for president will face off in a debate hosted by the Thresher on Feb. 16 and voting for all positions will then begin on Feb. 22.