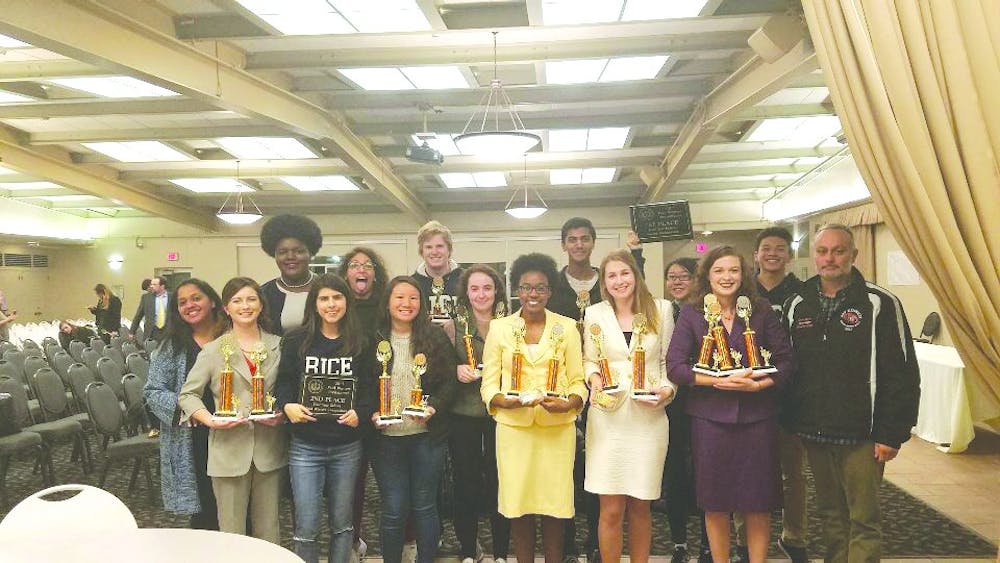 Last spring, while the rest of her classmates were throwing water balloons and cheering on their colleges at Beer Bike, Gennifer Geer was stuck in Peoria, Illinois for a national speech and debate tournament.

“I have a personal grudge against Peoria, Illinois,” Geer, a McMurtry College sophomore, said.

This fall, she competed at speech and debate tournaments five weeks in a row in every time zone in the United States and even more tournaments after that. Each tournament started around 8 a.m., but she gets up much earlier in the morning to get ready: an ironed suit, perfect hair, pristine makeup.

“I never wear lipstick at school, but it’s a trend among the women on the circuit to wear bold, bright lipstick,” Geer said. “It’s a way of declaring, ‘Listen up, because I have something important to say.’”

The team travels frequently and the time commitment is enormous, but it’s what is expected of a speech and debate team on the top of its game: Rice’s George R. Brown Forensics society is currently ranked first in speech by the National Forensics Association and 11th in debate by the National Parliamentary Debate Association. Between two tournaments this past November, the team won a combined 42 awards.

“I don’t have a favorite event,” she said. “I always want to do the event that isn’t next.”

Geer’s teammate Sonia Torres competes in debate alongside her partner Jason Barton. The pair started off the fall semester ranked 8th in the nation for debate by The National Parliamentary Tournament of Excellence, which tracks collegiate debate results.

Torres said that tournaments tend to be hectic. Competitors have to balance a college course load with the tournament’s demands, so they’ll alternate homework and scrolling through Reddit with working on debate preparation.

“Rounds are crazy intense, often with judges who used to be legends in the activity before they graduated,” Torres said.

David Worth is the director of the team and Shannon LaBove is assistant director. Both are lecturers in the School of Humanities and between them have 40 years of collegiate speech and debate coaching experience. They train the team to focus on flexibility rather than drilling them more than 15 hours a week like some other collegiate forensics coaches do.

“More so than other schools, a Rice competitor most not only excel in challenging coursework, but also at national competitions, and to do this successfully means working smarter, not harder,” Torres said.

Geer thinks it is Worth and LaBove’s ability to channel team members’ passions that helps make Rice’s team so dominant.

“People want to watch speeches that don’t sound the same as every other speech in the room, and that’s what Rice does really well,” she said.

Lauren Palladino attributes their success to the team’s small size.

“Rice’s team is small and selective, and I think because of our size we’re able to put a greater focus on each of us individually,” Palladino, a Duncan College freshman, said.

Palladino is part of what Worth calls an “incredible incoming freshman class.” Last spring, a large group of talented seniors graduated and left Worth facing a year of rebuilding the team, but the rebuilding year is actually turning out to be very successful.

“We have these phenomenal new people and the returners have really stepped up, so right now I’d say the team looks as good as it’s ever looked in terms of its future prospects,” Worth said.

Murray, who is also a freshman, said that having confidence is important for a successful speech and debate competitor.

“That and the ability to speak with purpose and make people believe what you’re saying,” Murray said.

Many members of Rice’s speech and debate team started competing on the high school circuit or even earlier. Bria Murray started in middle school and has been competing ever since.

“I joined because I don’t really know what I would do with myself without speech,” Murray said. “I’ve been involved in it since I was in the seventh grade. At this point, speech is part of who I am.”

Palladino was involved in speech in high school for four years, where she said there was a “socially-prescribed range of acceptable topics” as opposed to the collegiate level, where there is much more freedom in what is considered appropriate.

“I went from a severely underfunded high school team to competing for Rice, which is one of the best in the country, so this is a huge difference,” Palladino said.

Torres said she found her voice in high school debate, but college debate was very different: faster, more technical and much more competitive. She thinks the higher intensity is beneficial, however.

“It took me years to build, but I think college debate is [where] I found my confidence, particularly in high pressure situations,” she said.

Torres said her involvement with the team has given her the opportunity to meet people across the country who she would never have met otherwise.

“Because of forensics, I have met incredible alumni, successful lawyers, journalists, business people, and academics, who give invaluable [advice]: anything from how to succeed balancing a college workload with debate, to how to apply to grad school, to how to find the right career, which has made scary life decisions at Rice seem less scary,” Torres said.

Geer agrees that meeting people is the biggest impact from her participation in forensics.

“The team is full of passionate, ambitious, and intelligent people, and I’ve made amazing friends,” she said. “We get along really well because we’re a bunch of wackadoos.”