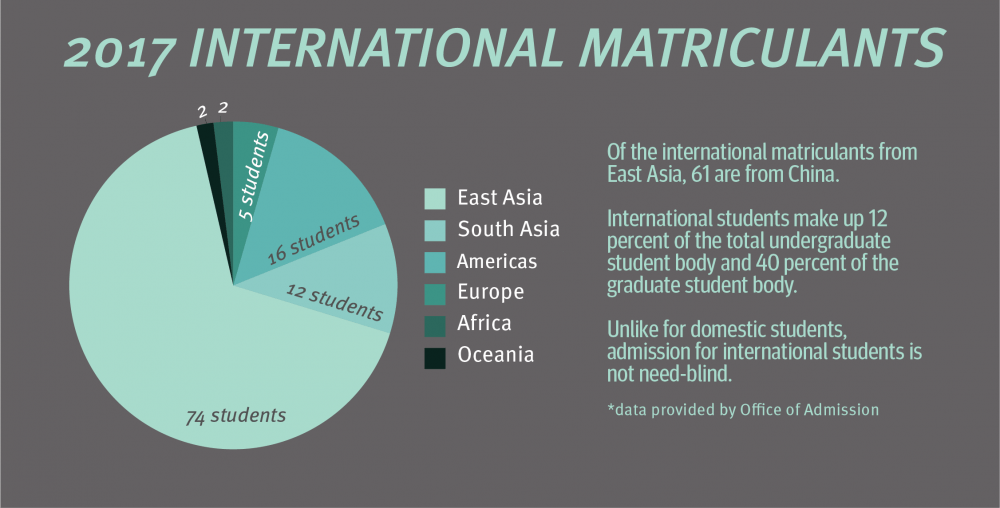 The Student Association will vote on a resolution calling for Rice University’s administration to establish an official policy to diversify the international student population at Monday’s Senate meeting.

This year’s incoming class included citizens of 20 different countries, according to Director of Admission Dan Warner. Out of the 1,084 students enrolled, 111 are foreign nationals by citizenship. Over half of international students, 61, are Chinese citizens. The country with the second most citizens is India with 11 students.

The resolution also calls on student leaders and administrators to examine challenges facing international students and for Rice to join the Institute of International Education’s Syria Consortium for Higher Education in Crisis - a group of 81 institutions as of March 2017 including Brown and Columbia Universities who have committed to providing scholarships for Syrian students whose education has been disrupted by war.

“The point of this legislation is to address a gap in priorities,” SA President Justin Onwenu, who introduced the legislation, said. “[For] the domestic student population [Rice has] made a lot of strides to make sure of how inclusive we are, socioeconomically and geographically. This legislation tries to extend that spirit to other areas of the university, specifically international students.”

Beginning in fall 2017, the Office of Financial Aid began to offer need-based aid to a limited number of international undergraduates. The office’s website states that international students who apply and request aid are reviewed as a separate group.

The Vision for the Second Century draft President Leebron shared with the Rice community in October includes the goal of diversifying the international population through strategic recruiting in a wider range of countries and increasing the aid provided to international students.

“Because of the limited amount of financial aid for international students, we have been heavily dependent on a few countries for those students, and the vast majority (other than athletes and music students) come from families who are able to provide or borrow the funds for tuition and other costs,” the V2C2 draft states.

Danna Ghafir, who introduced the resolution with Onwenu, said the pair met with Warner last fall, who led the effort to offer aid to a limited number of international students.

At Senate, Lovett College Senator Ariana Engles suggested the possibility of Rice partnering with outside scholarships for international students.

“Right now socioeconomically, the international population is not very socioeconomically diverse,” Onwenu said in response to Austin. “Geographically, in terms of recruitment we could do a lot more. There are talented students all over the world that we haven’t tapped in to.”

Due to an editing error, the section of the infographic labeled "Americas" was initially mislabeled "Latin America." The graphic has been modified to correct the error. [2 p.m. Jan. 28]