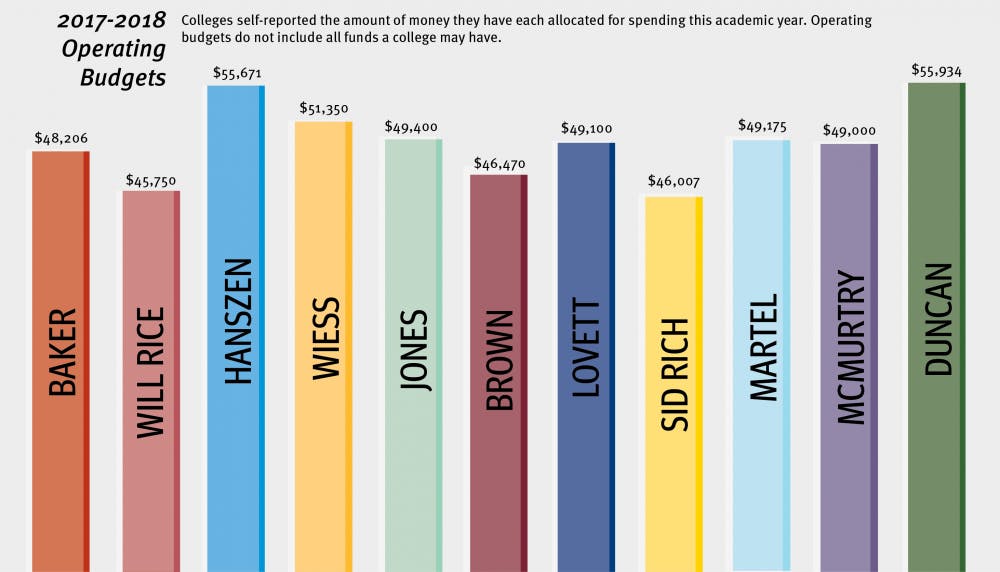 With approximately half a million dollars divided among them, colleges are coming up with unique ways to spend their budgets, from Hanszen College’s Beauty Committee to Sid Richardson College’s Brewing fund.

Each fall, Dean of Undergraduates John Hutchinson divides the funds amongst the 11 residential colleges. Since the allocation is determined by population, larger colleges receive more funds than smaller ones do, according to Vice President for Finance Kathy Collins.

In addition to the amounts they receive from the dean, the colleges can also incorporate funds from other sources, including their endowments and savings funds, into their budget.

Every college has a set yearly budget and a monthly bank-imposed spending cap, according to Collins. Within these amounts, however, the student governments are free to design their own allocation process and decide the areas that will receive funds.

“This level of control of about a half million dollars by Rice student governments is uncommon for universities such as ours,” Collins said.

Will Rice College Treasurer Aparna Narendrula said a college’s culture has an impact on how the budget is allocated.

New at Hanszen this year are a number of student-proposed initiative committees which were added to the budget alongside permanent standing committees. Among them is the Beauty Committee, which has a budget of $250 to host public hair and makeup tutorials for Hanszenites.

Baker College has the largest environmental budget of $1,582, an allocation choice that treasurer Alyssa Graham said was based on a college-wide survey of priorities sent to Baker residents at the beginning of the academic year. The fund, which is 3.3 percent of Baker’s overall budget, has been used for purchases such as greenware, a service where students can borrow reusable dishes.

This year two other colleges, Hanszen and McMurtry College, have designated environmental funds. Hanszen’s set aside $200 while McMurtry allocated $900.

Following the precedent of previous years, 25 percent of Wiess College’s $51,350 budget this year went toward Night of Decadence, amounting to a total of $15,000 according to Wiess’ budget, which treasurer Ashish Kulkarni said is due to expensive security measures.

Wiess makes some of the money back, however, from NOD ticket and shirt sales, according to Kulkarni, a junior.

Weis said he was dissatisfied with the 35 allocation areas on Brown’s budget.

“I personally think we could better serve the College by consolidating a lot of them,” he said.

Sid Richardson’s budget situation is a special case, resulting in a unique budgeting system. Because of an issue with clearing expenses, a $15,000 “debt” accumulated as rollover money over 2014 and 2015 in Sid’s budget, according to treasurer Jacob Barrios.

The unmoved funds appeared as rollover funds to the next year and increased the apparent size of the next year’s budget. Barrios said the budgeting office and the college reached an agreement to pay off the debt through the rollover funds.

“During my second year as treasurer, we reconciled this debt with Rice, and came to the current budget of approximately $46,000, meaning Sid now has one of the smallest budgets on Rice’s campus,” Barrios said.

To adjust to its smaller budget, Sid Rich switched this year from allocating to individual committees to allocating to clusters of committees that get assigned more flexible budgets, Barrios said. Barrios also said the new system has encouraged more inter-committee cooperation.

The colleges are only able to finalize their budgets after the dean of undergraduates relays the amount they will have to allocate in the fall. Weis said the budget is not always a clear indicator of a college’s priorities.

“The amount of money we allocate to something isn’t necessarily proportional to how much we value it — some things are just inherently more expensive than others,” Weis, a senior, said. “You can’t have Bacch[analia] without paying a hefty sum to [Rice University Police Department], but Floor Olympics just don’t need to be that expensive to be fun.”

Edit 01/10/2018 2:10PM: The article has been corrected to reflect that Duncan College has this year's highest operating budget rather than Wiess College.

A previous version of this article stated that Wiess Treasuer Ashish Kulkarni approximated that Wiess College generated approximately $6,000 of revenue from NOD ticket sales. This has been corrected as Wiess could generate more revenue given previous attendance numbers and ticket prices in addition to shirt sales.