'Do something': Students perceive lack of effort by administration in MLK day celebrations 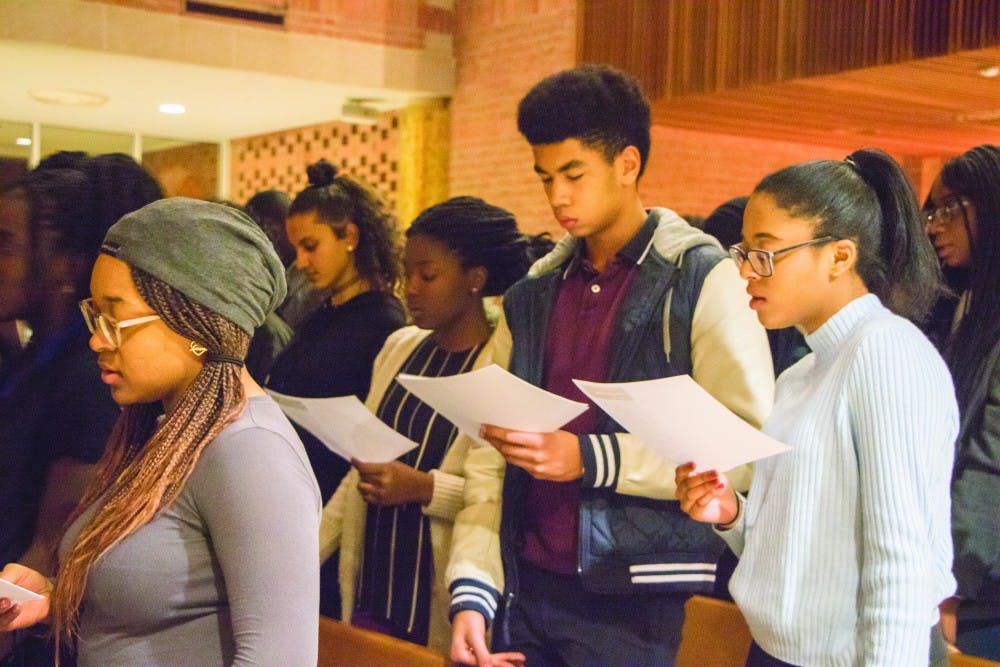 Students commemorated Martin Luther King Jr. day by participating in two parades and organizing a vigil, but some raised concerns about Rice’s commitment to diversity after riding in a float one student called “dilapidated” and noting the vigil in the Rice chapel was not attended by President David Leebron.

Yonas Tekola, vice president of Rice’s Black Male Leadership Initiative, said the float, which is used for both the 40th Annual “Original” MLK Jr. Parade held Monday morning and the Houston Pride Parade, was ripped and dirty when he and several other students began to decorate it at the end of fall semester.

Tekola said the float had been stored near the football stadium and Greg Marshall, the director of university relations who is in charge of the float, informed him a homeless person had been living in it.

“[The float] was torn in one of the sides and we had to cover that up with decorations,” Tekola, a Jones College sophomore, said. “We didn’t want to give the impression of our float being raggedy, like we didn’t care as much about devoting time and resources to the event.”

Jan West, assistant director of multicultural community relations in the Office of Public Affairs, said the current float has been in use for 10 years, since the Pride Parade in the summer of 2008. According to West, the previous float was built on a trailer borrowed from another department, and because that department would strip off float additions, University Relations in the Office of Public Affairs bought their own trailer and built a permanent float in 2008.

Josiah Yarbrough, a Black Student Association member who helped decorate the float, said he was also disappointed in the condition of the float.

“The side panels were tattered, and it made me wonder about how enthusiastic Rice was about showing support for things like social justice,” Yarbrough, a Will Rice College senior, said. “However, it was nice to see the completed project, especially with regard to the sentiment: many people in the Rice community came together to support the preparation of a display that honors civil rights and those who fought for them. And I think that shouldn't be ignored.”

Tekola was in the 40th Annual “Original” MLK Jr. Parade, which included the float along with nine students, five alumni and Associate Provost Roland Smith. Mark Williams Laforest, who serves as secretary of both the BSA and BMLI, participated in the 24th Annual MLK Grande Parade, which he said involved a rental convertible, nine students and four alumni.

Stephany Marchany, a member of the Hispanic Association for Cultural Enrichment at Rice who participated in the 40th Annual “Original” MLK Jr. Parade, said it was important for Rice to demonstrate it values civil rights through having a float.

“I'm not really sure what else [the administration] could have done besides observing the holiday by canceling classes and letting those who wanted to participate in the parade do so,” Marchany, a Brown College freshman, said.

BMLI president and Hanszen College sophomore Jeremiah Murrell, who participated in decorating the float, said he believes there is an administrative lack of effort towards MLK day festivities, which is symbolic of how the Rice administration treats issues of diversity. Williams Laforest said issues involving Rice’s multicultural center are another sign of what he sees as a larger issue.

“The administration that’s not part of this culture doesn’t really stick its neck out to engage with it,” Williams Laforest, a Jones sophomore, said. “It’s just something that they delegate so they can keep up that sort of pristine Rice image of diversity and inclusion.”

Williams Laforest said he was disappointed Leebron did not attend the MLK vigil held in Rice’s chapel on Sunday evening.

“White faculty don't really make an effort to deal with multicultural matters and they kind of just push it to minority faculty,” Williams Laforest said. “In terms of people who actually organize things it's only the minority faculty, so tell Leebron to actually do something.”

Leebron said he has attended the MLK vigil and program in the past when he was invited and his schedule allowed him to do so. He said he commended both the BSA and the Association of Rice University Black Alumni for organizing the vigil and looked forward to attending in future years, schedule permitting.

“Unfortunately, I was not directly contacted about the event this year to request that I speak or otherwise attend, nor did my office receive a timely request to reserve the date,” Leebron said. “As the vigil was not held on Martin Luther King Day as it was last year, I had made other plans for Sunday.”

West said BSA president Missy Lollis resigned just before the MLK vigil and parade. Lollis, a Sid Richardson College junior, could not be reached for comment at the time of publication regarding her reason for resignation.

“The BSA was scrambling to pull everything together especially since the holiday fell a little earlier this year,” West said. “The event turned out well, however, in the midst of everything as an oversight the group failed to invite President Leebron.”

The MLK vigil and program held Sunday evening at the Rice Memorial Chapel by the BSA, the BMLI and Multicultural Community Relations in the Office of Public Affairs, was titled “Where Do We Go From Here?”

Nhedrick Jabier, a 10-year-old and third-place winner of the 2018 MLK Jr. Oratory Competition, delivered “A Salute to Dr. King,” asking those in attendance to listen as he shared his dream for today’s world.

“I dream a possible dream today,” Jabier said. “A world in which so-called privileges disappear and people are compensated by their hard work and perseverance. That’s my dream for today’s world. A possible dream.”

Following Jabier, a panel of Rice professors, student leaders and Pretta VanDible Stallworth from the Houston Community College Board of Trustees shared their thoughts on MLK.

“The way I see Martin Luther King is like a spark,” Sydney Gibson, panelist and president of the Rice University Graduate Student Association, said. “I see him as the start, but I think a lot of people see him as the finish, as the goal, like we made it. I see Dr. King as the momentum moving forward.”

Justin Onwenu, panelist and Rice Student Association president, said that while progress has been made, there is more work to be done.

“I think we have to be careful moving forward about confusing tolerance with power and progress,” Onwenu, a Sid Richardson College senior, said.

This article has been updated to reflect that Provost Marie Lynn Miranda, Dean of Undergraduates John Hutchinson and Associate Provost Roland Smith attended the MLK vigil.