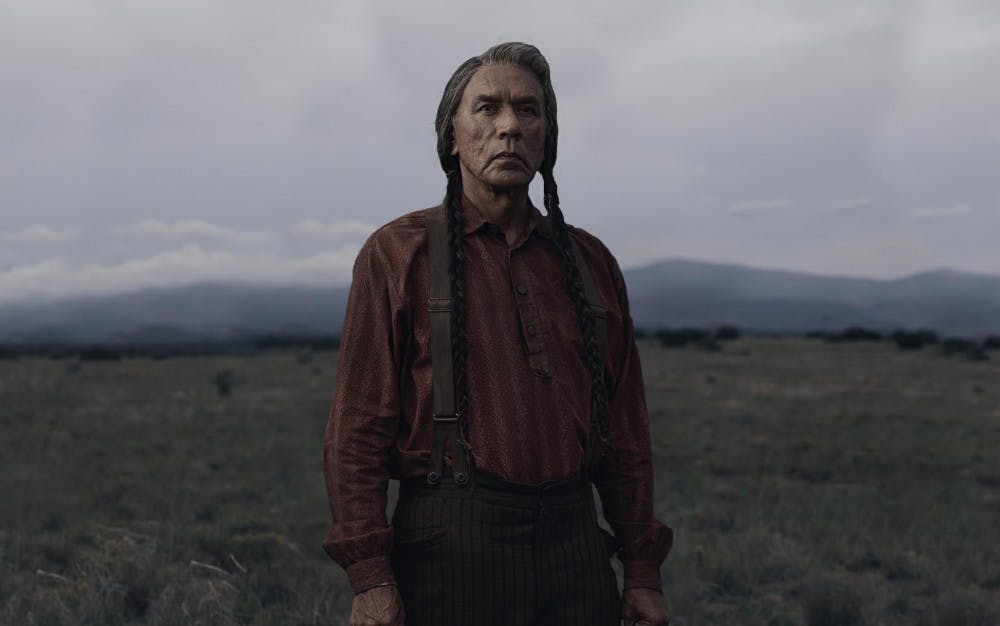 At the beginning of “Hostiles,” a father rushes into the cabin where his wife, Rosalie, is tutoring their two young daughters to inform them that an attack by Native Americans is imminent. He sacrifices himself trying to save his family , but it cruelly proves to be in vain. Less than a minute later, all three children have bullet holes in them, the cabin is on fire and the family’s horses have been taken. All of this takes place in the first few minutes of Scott Cooper’s western “Hostiles” with over two hours of running time still left to endure. A re-examination of a time in American history that’s received glamorous treatment for too long, “Hostiles” stomps on the rose-tinted glasses and gets its hands bloody without a care for viewers’ discomfort at its violence.

During his time serving in the United States cavalry, Captain Joseph Blocker has made a career out of killing Native Americans. But, after doing it for so long, he’s made many enemies, both among Native Americans and white settlers, and has become a shell of a human being. Then his commanding officer gives him one last job to do before retirement. Yellow Hawk, a terminally ill Cheyenne chief, would like to return to his tribal lands over a thousand miles away in Montana for a proper burial. Blocker has been chosen to lead the team that will escort the chief and his family there. If he doesn’t want to lose his pension, Blocker must swallow whatever acidic animosities exist between him and the chief and follow orders. As the group journeys north, they encounter Rosalie, who is now a catatonic widow. Along the way, death proves to be close by in the unforgiving territory, with no telling whom it will claim or when it will strike.

As Blocker, Christian Bale’s eyes reflect the character’s hatred at the “savages” he blames for the deaths of his friends as well as what his job has made of him. Wes Studi’s performance as Yellow Hawk is one of such incredible dignity and majesty that one hopes to someday be as fearless as him when it comes to the end of their earthly time. As three of the soldiers in Blocker’s unit, Timothée Chalamet, Jonathan Majors and Jesse Plemons are a well-oiled ensemble whose presences are sorely missed once their characters meet their demise.

Rosamund Pike is gut-wrenching and fierce as Rosalie. The sole survivor of the attack on her family’s homestead, Rosalie’s raw trauma makes for excruciatingly heartbreaking moments. When Blocker first encounters her during the journey to Montana, she tells him not to disturb her three deceased children because “they are asleep.” When she buries her family, her wailing as she tears at the ground with her bare hands brings Blocker’s men to tears. But in the end, it is Rosalie’s maternal instincts that help her find some healing. Though wary of Yellow Hawk and his family at first, the trials of the road lead her to eventually warm up to them, particularly the chief’s young grandson.

While on guard duty one night, a rookie tells a more senior team member that he’s overwhelmed at having just killed someone for the first time. The hardened veteran tells the rookie that, at some point, killing will become second nature for him. “That’s what I’m afraid of,” the first man almost tearfully admits. Similarly, although the massacre of Rosalie’s family at the film’s start gets such a visceral viewer reaction, by the time the final slaughter happens in the remaining twenty minutes, one almost expects this brutality — if they didn’t already walk out during the opening scene. For those who choose to sit it out, “Hostiles” may be a heavy load to bear, not just because of its tonnage of violence, but also because of how quickly one acclimates to its severity.

Hostiles is playing in movie theaters now. Watch the trailer below:

5 Native American artists you should know

November is National Native American Heritage Month, a time to appreciate the achievements and contributions of Native American peoples across the United States. In honor of this month, here are five Native American artists whose work provides a glimpse into the beauty and diversity of Indigenous cultures and what they embody.