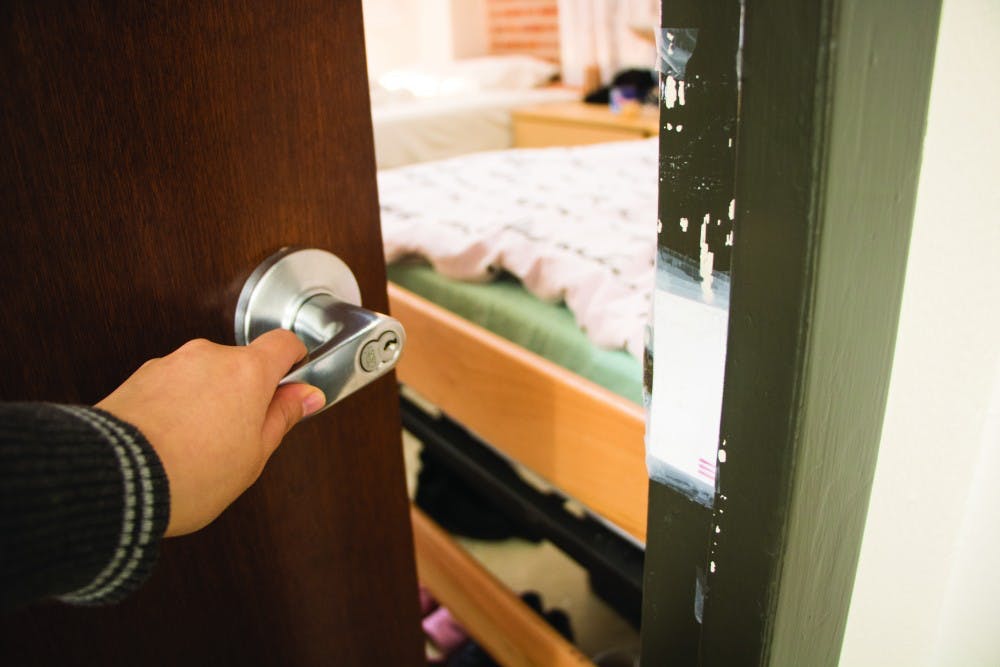 As students at Will Rice College returned from winter break, many found themselves charged with substantial fines and stuck with room doors that swing shut behind them. At other colleges, Housing and Dining checked for carded doors and disseminated warnings, according to students.

Students living in Will Rice’s old dorm have traditionally disabled automatic door closing mechanisms despite language in the housing contract prohibiting tampering or disconnecting door closers, according to Will Rice senior Helen Wei.

The housing contract states the corresponding fee is $200, which is “assessed either directly to the individual responsible or if there is doubt in culpability, [...] assessed to the college.” Housing and Dining divided fines amongst the students living in each room, leaving students in single rooms with the full fee, and students in doubles or triples with lessened costs. H&D representatives could not be reached for comment by the time of publication.

Wei said one of the primary reasons why she changed the mechanism is because she is in a single room for the first time.

“For me, a big draw of Old Dorm is the hall culture, and being able to keep our doors open so friends could walk through helped me adjust to not having my friends as roommates,” Wei said. “But it’s really unfortunate for me, then, that the fine is $200 per room rather than $200 per person, making me pay much more than someone in a double or triple.”

According to Will Rice senior Juan Saldaña, some doors were fixed without a fine and others were not fixed but fined. (Saldaña is editor-in-chief of the Thresher.)

“Unscrewing a single bolt doesn’t really hurt anyone but the $200 could be really detrimental to some,” Saldaña said. “Many of the door closures have a sticker that says tampering with it will result in a 25 dollar fine plus parts and labor. Considering we’re all down $200, I promise you the single screw or the 30 seconds it takes to put back in does not cost $175.”

Wei said that this is the first instance she knows of where students were fined for this offense, despite the history of door disabling.

“The explanation that they provided to us was that this year, a lot more people were changing the door mechanisms, which would pose a safety concern or fire hazard,” Wei said. “I don’t know the exact numbers and I won’t pretend to know, but based on my three years of living in Old Dorm I haven’t seen that drastic of a change.”

According to an email from magisters Bridget Gorman and Michael Reed, H&D requested a meeting with them after they performed the checks during the break and were adamant about distributing fines.

Students who were discovered to have disabled their door closers were required to attend a meeting with the adult team, college government members and RUPD representatives.

“While we were told it wasn’t going to be a lecture, it definitely felt like one,” Wei said. “But I appreciated Captain [Clemente] Rodriguez’s attempt to try and understand our side. I know that the magisters meant the meeting to be different, and I definitely appreciated how understanding Mike and Bridget were, and how they listened to our concerns and said they’d help advocate for us concerning the fines.”

Students were warned at least twice previously, in an email from college coordinator Casey Okabayashi on Aug. 24, 2017 and by chief justice Alan Wang on Sept. 12, 2017, that H&D had noticed the door disarmings and emphasized that it was a fineable offense.

Despite warnings, students developed a culture of keeping doors open in order to create a common space out of hallways and individual rooms in response to the lack of communal spaces in old dorm, according to Will Rice freshman Simona Matovic.

“I understand that the safety hazard aspect of it takes precedent over the social aspects associated with it, but the social element is very real,” Matovic said. “Door stops aren’t quite the same because having open doors as the default makes a significant difference. Closing the door had always been an active choice, therefore it became fairly rare, which helped to establish a very open community.”

In the mandatory meeting, students also complained of the level of pressure of the automatic door closers, which rendered most door stops ineffective. According to Wei, another Will Ricer bought a door stop but it would not keep the door propped.

“One of the biggest reasons why we didn’t just buy door stoppers was because no one did in the past, everyone just changed the door mechanisms, and didn’t have to pay any money for it,” Wei said. “It was easier than having to go out and buy a door stopper and making sure that it would be able to prop open our door.”

Students at other colleges, such as Martel, McMurtry, Duncan and Brown, were warned at the beginning of the semester by their student maintenance representatives that H&D noticed increases in carding, the disabling of automatically locking doors, across campus.

Students at Duncan received an email from their SMR that public bathrooms would be uncarded, and that those with personal rooms and closed suite doors would be fined if they were not uncarded by the following Friday.

“I think that uncarding public bathrooms is a completely unnecessary safety measure,” Flanagan said. “People already need to swipe into the residential colleges, which should be enough of a deterrent to non-students. Also, most of the personal belongings in the public bathrooms are inexpensive toiletries, so the risk of theft is low.”

Duncan SMR Nick Liesle said the university saw a need for stricter enforcement after noticing an especially large percentage of students carding their doors in particular locations on campus.

“I can’t speak for other colleges, but I have not noted a particular increase in door carding at Duncan,” Leisle, a senior, said. “With that said, though, I don’t generally push on random doors to check their locking status. So it’s really hard for me to tell.”

Leisle said it appears that most, if not all, disabled doors have been uncarded for the time being.

Duncan sophomore Mackenzie Flanagan said she understands why H&D wants the doors uncarded, but that the overall impact is detrimental to student life. “Now that our rooms are not carded, many of my friends have stated that they feel more isolated,” Flanagan said. “I feel that H&D should allow students to make the decision to card their doors and, by making that decision, students would assume responsibility of that aspect of their safety.”