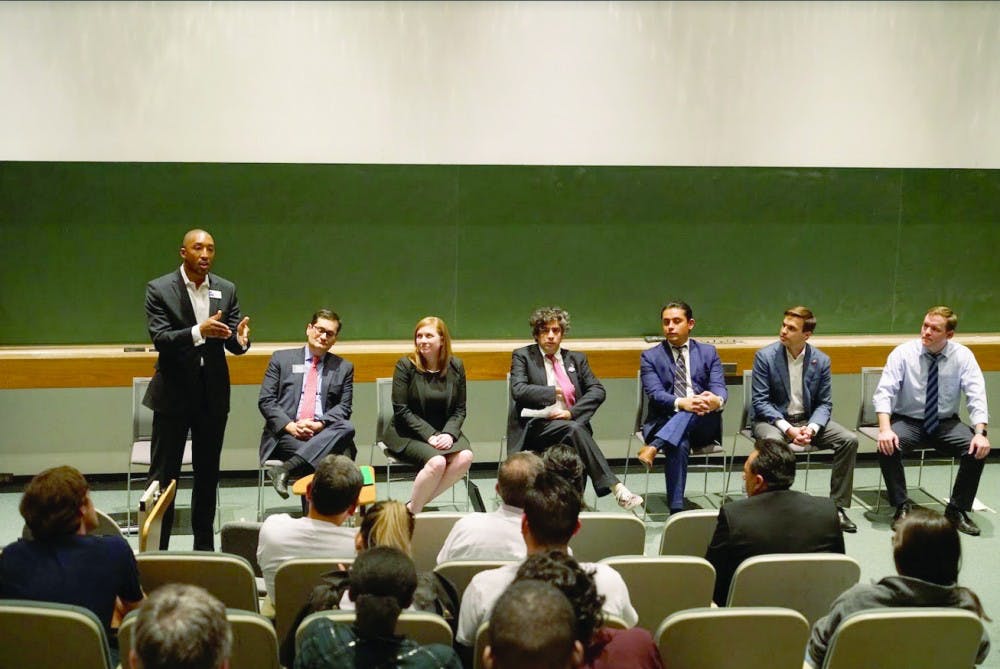 With primary elections approaching on March 6, seven Democrats travelled to Rice’s campus on the night of Monday, Jan. 22 to convince students of why they were the best candidate to represent over 750,000 Texans in the House of Representatives.

Democratic candidates for the 7th Congressional District answered questions on topics including education, energy and impeachment in front of a forum of Rice students sponsored by Rice Young Democrats and Civic Duty Rice.

Several of the candidates share a personal connection to Rice. James Cargas’ wife is an adjunct professor of electrical and computer engineering, Lizzie Fletcher’s father attended Rice and Alex Triantaphyllis is an alumnus from Wiess College.

Candidate Laura Moser did not attend the forum and was represented by her husband Arun Chaudhary.

“It’s always great to be back at Rice,” Triantaphyllis said. “I learned so many life lessons and got such a great education here and made so many friends. It’s a place I hold near and dear to my heart.”

The structure of the forum consisted of two-minute introductions followed by 90-second responses to questions from moderator Mark P. Jones, a fellow in political science at the Baker Institute for Public Policy.

The forum ended with a 20-minute question and answer period where audiences directed their own questions at specific candidates.

Many candidates echoed each other in their views on education, with a majority of candidates coming out expressly in favor of universal pre-kindergarten education.

Tuition reform was another point of consensus among the candidates, who expressed discontent regarding high levels of student debt.

“The student loan situation in the United States is repulsive and atrocious,” Joshua Butler said.

When asked about how they would balance calls to counteract climate change with Houston’s economic emphasis on the energy industry, candidates repeatedly emphasized the importance of developing renewable energy and regulating industries to produce fewer carbon emissions.

Cargas took the energy question as an opportunity to voice his concerns with Democrats’ general approach to oil and gas.

The final question posed by Jones asked candidates whether they would favor, oppose or abstain from Texas Democrat’s Al Green’s filing of impeachment articles in the House last fall. Candidates Jason Westin, Butler, Fletcher and Triantaphyllis said they would oppose impeachment, citing a current lack of evidence. Three of the seven candidates, however, said that they would vote to impeach Trump.

“There’s so much material to impeach him on. I would do it in a heartbeat,” Cargas said.

Lovett College freshman Bria Murray said that many of the candidates’ answers were alike, an occurrence that some candidates themselves noted throughout the evening.

“I think the difficulty with having a panel full of Democratic candidates is that their answers tend to be very similar, which makes it difficult to find someone who stands out,” Murray said.

“I thought we had a really great turnout and it indicated what we’ve talking about for a while, which is that a lot of people on college campuses across the country and at Rice specifically are really upset about what’s going on in Washington,” Brotzen said. “The issue isn’t in convincing people to be Democrats, it’s getting them to act on their already liberal values. So that means getting them involved in campaigns like the ones we just heard tonight.”