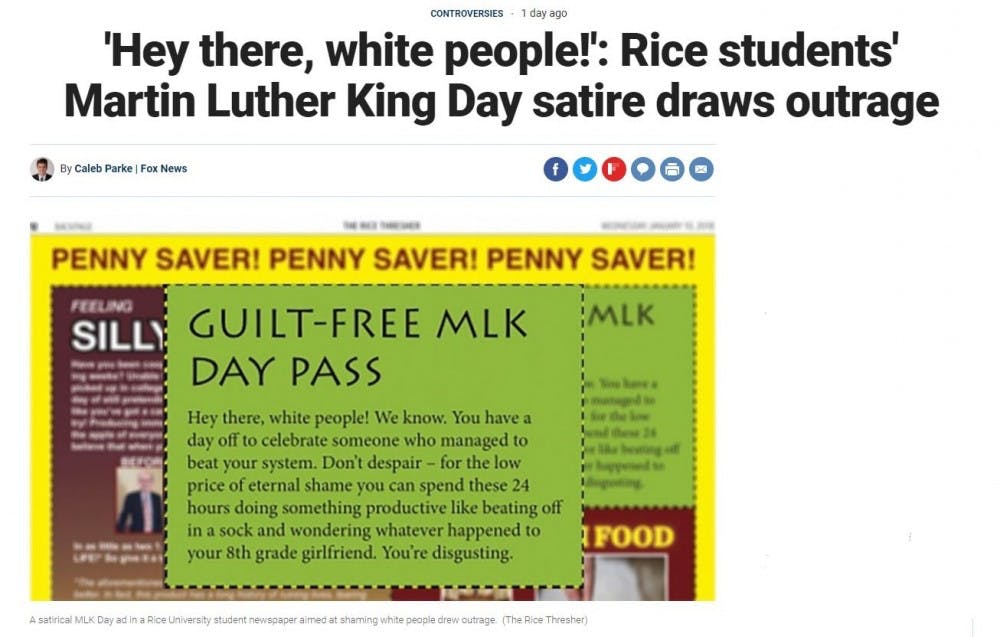 The Backpage piece read “Hey there, white people! We know. You have a day off to celebrate someone who managed to beat your system. Don’t despair — for the low price of eternal shame you can spend these 24 hours doing something productive like beating off in a sock and wondering whatever happened to your 8th grade girlfriend. You’re disgusting.”

A photo of the Backpage began garnering attention on Facebook and Twitter on Friday, two days after its publication in print.

At 10:27 a.m. that Friday, Rice University released a statement responding to concern from its official Twitter account.

“Rice ... is disappointed w/ this offensive attempt at satire, which is contrary to our values,” the statement read in part. “We support a free press, even if we don’t agree.”

The Thresher released a staff editorial response to the controversy later on Friday evening defending the intent of the Backpage.

“The purpose of the ‘ad’ in the Backpage was to encourage students to reflect on the meaning of the holiday rather than use it simply as another vacation day without classes,” the editorial said.

The editorial expressed disappointment in the University’s response.

“Discussion and reflection are often spurred by that which may make us uncomfortable,” the editorial said. “We do not ask the university to stand with our editorial content on every occasion, but we are disheartened that Rice’s administration finds a part of a Backpage intended to target issues of institutional racism and general apathy to be ‘contrary to the values of the university’”

Local news station KPRC Click2Houston picked up the story that evening, citing the editorial response by the Thresher, an extended statement sent out by Rice University to news outlets and a statement by Student Association President Justin Onwenu.

“Rice really is a place where a wide range of intellectual ideas and cultures mesh together to create a beautiful mosaic,” Onwenu’s statement to KPRC Click2Houston read. “The Thresher Backpage is student-controlled and is often used as a place for satire that sometimes misses the mark, as is the case here. However, Rice students are committed to principles of diversity, tolerance and inclusion.”

Inside Higher Ed, The Blaze and Fox News published stories on the Backpage on Monday. On Monday night, Fox News shared the article on their official Facebook page.

Afterwards, the official Rice University Facebook page received a number of low ratings and angry comments aimed at the Backpage.