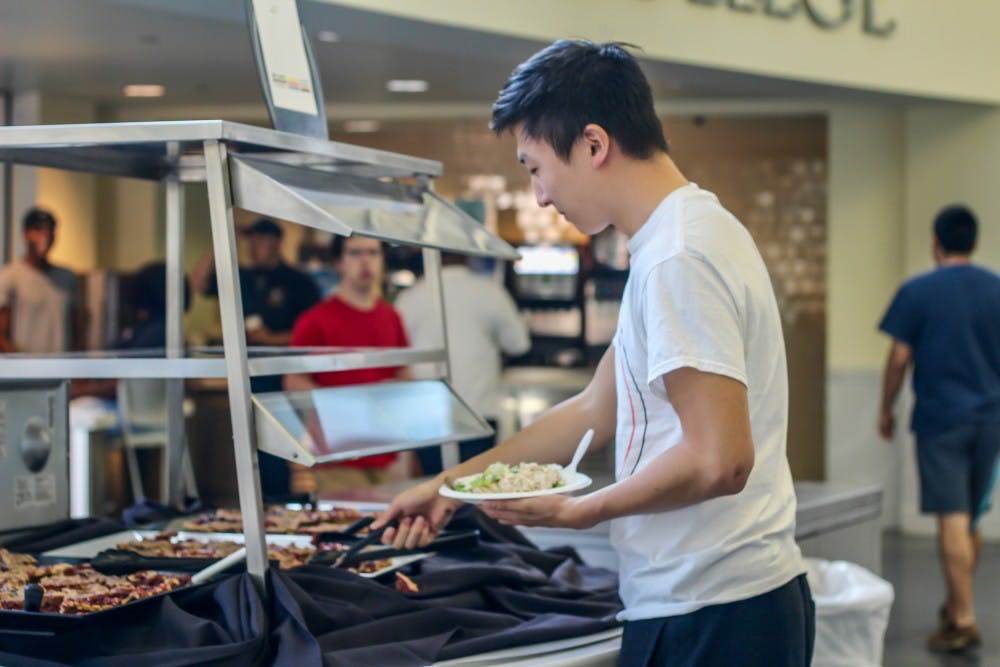 Saturday dinners are here to stay, according to Housing and Dining Senior Business Director David McDonald.

North and Seibel serveries have each averaged 400 swipes a Saturday dinner since the start of the semester when they were implemented, McDonald said. McDonald said the number of swipes has been consistent with his expectations.

“For 800 people to come, that’s a good representative number of the population,” McDonald said. “That’s a big number.”

For comparison, H&D typically serves around 2,000 dinners each day Monday through Thursday and Sunday, according to McDonald. Friday looks more like Saturday at 800, McDonald said.

This is the first year that H&D included Saturday dinners as part of its full on- campus meal plan. According to McDonald, overcrowding due to a larger-than-expected enrollment this year offset the financial costs of adding another meal to the plan.

Regardless of enrollment in the future, McDonald said the meal plan will continue to include Saturday dinners and the cost of meal plans will not increase any more than the already expected 1-3 percent annual increases.

“Any meal plan increase at this point will be a standard incremental increase to cover standard inflation costs of doing business,” McDonald said.

“We frown upon paper as much as possible, but as an interim experiment, we think it was a good try,” McDonald said. “That may change for next year though.”

According to McDonald, a number of factors, including the source and cost of ingredients and menu design, will keep the meal plans financially sustainable in future years.

Looking forward, McDonald said that based on this year’s data, he does not expect an increase in the number of participants in Saturday dinners next year. However, he said that H&D has a plan to accommodate potential future increases.

“We have a plan in place if we have to open a third or fourth servery, [but] we haven’t had to get there yet,” McDonald said.

“I think we have tapped into an unmet need on campus and are moving to make Rice as accessible as possible to students of all socioeconomic backgrounds,” Todd, a Wiess College senior, said.

“I don’t always feel comfortable having to spend money on transportation and outside restaurants,” Mu said. “It feels more reassuring that the university provides these options for students who don’t necessarily have the resources to go out and eat all the time.”

Wiess College junior Talia Kramer said she is unsure whether they are the best solution.

“In my opinion, I think the integration of Rice students with the Houston community outweighs the benefits of free Saturday dinner,” Kramer said. “Saturday dinner costs can always be avoided as well by simply saving food from the servery from lunch.”

McDonald said Saturday dinners have been a good way to increase accessibility to low-income students.

“The continued narrative around folks who may not be able to afford to go off campus has been a big topic at the university for several years now, and this is a good way to help accommodate that,” McDonald said.

“We feel this is solving a lot of problems,” McDonald said. “It’s taken a while. [But] I’m really glad to have gotten this off the ground.”