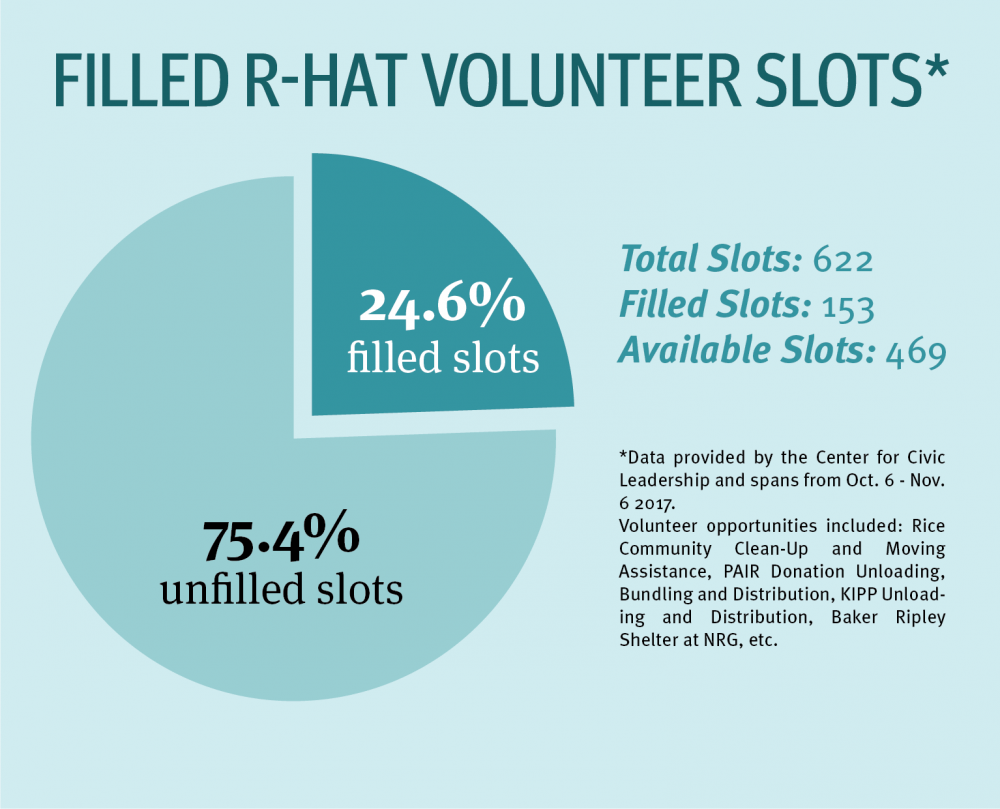 Amid the confusion over leadership, R-HAT engagement declined severely as classes resumed, according to Michael Domeracki, associate director of domestic programs and fellowships at the CCL.

According to Quenemoen, the Doerr Institute for New Leaders, which partnered with the CCL to found R-HAT, stepped out of the program after Harvey because engaging undergraduates in community opportunities is not its mission. The CCL now manages partnerships and coordinates Hurricane-Harvey-related volunteer efforts in partnership with the Student Association, the Graduate Student Association and RSVP, which publicize volunteer opportunities.

Zhu, a Sid Richardson College senior, said she was under the impression that the Doerr Institute, one of the founding partners of R-HAT, initially proposed transferring control of R-HAT to the student group.

Zhu said RSVP was excited to take control of R-HAT, as she said the Doerr Institute had initially asked them to do. RSVP had a plan to incorporate R-HAT into its existing structure and created an R-HAT committee of five students.

In September, Quenemoen said RSVP was well-suited to engage with R-HAT.

“We wanted to ensure a continued student leadership role in R-HAT, and RSVP made perfect sense to engage as their mission is to support student volunteerism,” Quenemoen. “Additionally, they are accountable to the SA as a blanket-tax organization and advised by the CCL.”

This week, Quenemoen said the Doerr Institute may have overestimated the capabilities of RSVP in asking them to manage community partnerships once classes resumed.

However, Zhu said RSVP is equipped to communicate with community partnerships, as they do this every semester for the volunteering opportunities they arrange. She said the misunderstanding with the CCL over RSVP’s desire and ability to manage partnerships may have stemmed from initial difficulties in contacting community partners who were not yet ready to assess their volunteering needs.

Domeracki said he has been in in charge of student communications with RSVP and the SA. In a meeting in early September, Domeracki said the CCL and RSVP agreed the CCL should coordinate partnerships and RSVP should handle publicity and student engagement.

Zhu said that RSVP has been frustrated by its lack of involvement in the decision-making process and that their dialogue with the CCL surrounding RSVP’s role has frequently changed.

“We met multiple times a week, for hours, but it didn’t seem like a lot was getting done,” Zhu said. “We were never given the reins.”

She said she was particularly frustrated that RSVP never gained access to the R-HAT listserv and its 2,000 subscribers. She said they repeatedly asked for access but were only recently informed that IT would not allow students to manage the email.

“IT just flat-out said you can’t give [listserv access] to a student,” Domeracki said. “I told RSVP that.”

According to Office of Information Technology Associate Vice President Diane Butler, OIT does not restrict access to listservs but gives the owners the chance to set them up as they would like. Quenemoen managers the R-HAT one, Butler said.

Quenemoen said she did not realize she owned the listserv.

SA President Justin Onwenu said there have been miscommunications around RSVP’s role. He said he understood that the CCL would manage the partnerships and that RSVP would publicize them, with the SA operating in an advisory role and overseeing RSVP.

“It was this revolving door where, from the SA perspective, the CCL didn’t necessarily trust RSVP to get the job done and RSVP kind of pulled back because the CCL wasn’t giving them enough control,” Onwenu said.

According to RSVP co-president Carey Wang, RSVP did not feel comfortable advertising volunteering opportunities that they had not organized, especially when they noticed transportation and problems surrounding the opportunities.

Zhu said taking the Metro, as some opportunities required, was difficult because graduate students are not given free cards. Zhu said she paid for Metro cards for volunteers who did not have them and was not able to communicate these difficulties with the CCL.

“We’re part of the face of R-HAT, but we don’t have any control over it,” Wang, a Will Rice College senior, said.

Domeracki said he was never informed of any discomfort regarding the opportunities or RSVP’s role in publicizing them. Quenemoen said she has not heard negative feedback from RSVP since Zhu emailed her in early September about challenges with volunteering at the NRG pet shelter. Quenemoen said she followed up with the community partners and resolved the issues.

Onwenu said that, while he was not sure if better communication would significantly increase volunteer turnout, he was frustrated to see more posters about DuncStep and Night of Decadence than R-HAT.

Despite past challenges, Zhu and Wang still hope to work with the CCL and increase their role in R-HAT.

“Our goals are the same,” she said. “We’re not as concerned with figuring out who’s to blame, but ultimately we just want to see R-HAT succeed.”

Both Quenemoen and Zhu said that maintaining student involvement in R-HAT has been a challenge. Since Oct. 6, 153 of the 622 opportunities offered to students have been filled. Over 2,000 students volunteered through R-HAT between R-HAT’s inception and Sept. 6, according to Doerr Institute Director Tom Kolditz.

Domeracki said R-HAT engagement declined severely the weekend after classes resumed and then dropped again after the next weekend, Sept. 16 and 17.

Due to low turnout, Quenemoen said the CCL has turned down community requests for volunteers due to low turnout. Since few students signed up for opportunities during the week, the CCL had to restrict their partnerships to organizations who could host volunteers over the weekend.

“What we learned very quickly — and there’s no value judgement here — is that students don’t want to [volunteer] on a weekday,” Quenemoen said.

The CCL expected this decline in engagement, Quenemon said. Throughout the months since Harvey, the CCL has been balancing student interest and availability with community partner demand.

“We don’t want to over-promise and then not be able to deliver,” she said.

According to a survey sent out when classes resumed, over half of respondents said they wanted weekly recurring volunteer commitments. Believing this level of commitment was not feasible, the CCL organized bi-weekly opportunities instead.

In the months since Harvey, volunteering opportunities have become more multidimensional, according to Quenemoen. For example, Fe y Justicia, a worker protection organization, wants Spanish-speaking volunteers to interview migrant workers who have come to Houston for jobs related to Harvey recovery, which Quenemoen said presents a dynamic opportunity but requires more skills.

Many organizations are now working to address their long-term needs, requiring more skilled volunteers, according to Quenemoen. Assessing student interest is still a challenge for the CCL.

“If students are not interested, that’s okay,” Domeracki said. “We’re not demanding that students volunteer.”

This story has been updated with the response from the Office of Information Technology.