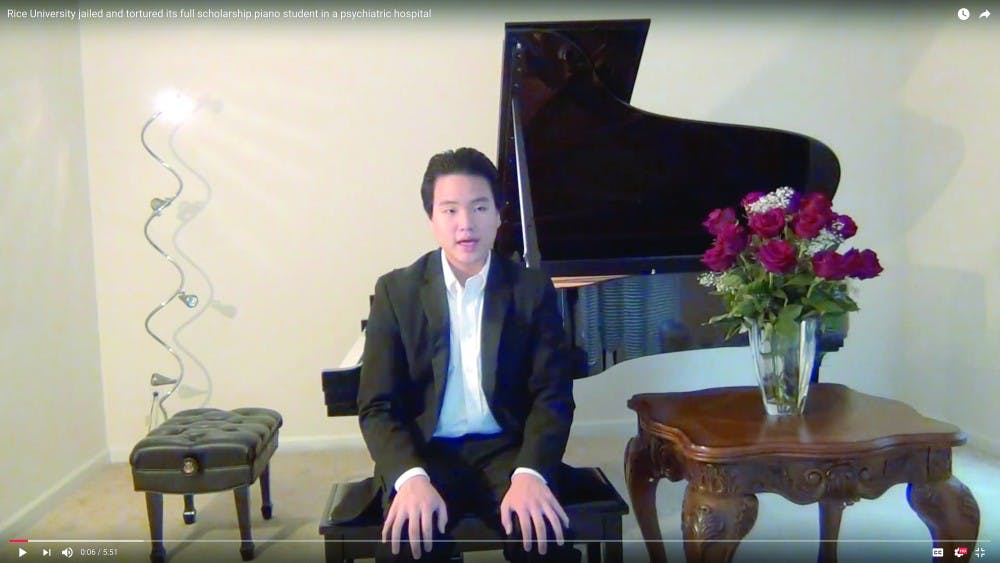 Rice University freshman Michael Lu said he is speaking with attorneys after he spent 12 days in the hospital for psychiatric symptoms, leading the Dean of Undergraduates’ office to temporarily withdraw him from Rice and recommend he take at least a year off. University officials were unable to comment on Lu’s specific case under the Family Educational Rights and Privacy Act.

In a video he posted to Facebook on Oct. 30, which has been viewed more than 3000 times and shared more than 50 times, Lu alleged Rice “jailed” him by placing him in the hospital.

Lu, who studied piano performance, said Student Health Services prescribed him medicine to control his asthma after Hurricane Harvey, and that the medicine caused him to develop bipolar mania. According to Lu, several doctors have said he is ready to resume his studies, but Rice will not yet allow him to return.

“It was very traumatizing to me, this whole experience,” Lu, a McMurtry College freshman, said. “In my whole life I’ve never had something like this.”

According to Dean of Undergraduates John Hutchinson, who said he could comment on mental health cases in general, around 50 to 60 students voluntarily take a medical withdrawal from Rice each year for mental health reasons. In very rare cases, Hutchinson said, he may withdraw a student against their will with the advice of medical professionals. Hutchinson said Rice has not had legal actions brought against it relating to mental health issues.

“I don't want my students to think, 'If I tell someone that I'm thinking that I might hurt myself then they will kick me out of school,’” Hutchinson said. “That does not happen.”

After Hurricane Harvey, Lu said the asthma he has had since he was six months old got so severe he needed to use an inhaler at least once an hour to keep breathing.

Lu said he had to wait for treatment until Student Health Services reopened after Labor Day. Then, he said Dr. LeCresha Peters prescribed prednisone and within two days of taking the drug he could not sleep. Lu said Health Services provided him a list of side effects and he had a bad experience with the drugs four years earlier. After calling his father, Lu said he decided to cut the dose of prednisone in half but still struggled to fall asleep before 4 a..m.

Lu said he emailed his professors about his health and was referred to talk to someone in the counseling center. He said he also revisited the health center and was given Benadryl before he flew home to St. Louis for fall recess.

On Oct. 10, Lu said he returned to Rice for a studio class that night. On the plane, he said he had a headache so he took Tylenol and twice the maximum dose of Benadryl.

Lu said he was able to perform in his studio class, but that same night he was still unable to sleep. He emailed his professors saying he would need to take time off but went to class the next day.

“The next morning I went to a piano lesson and I remember feeling bad about the last night and I did cry,” Lu said. “But after the lesson I felt like I could go to my 11 a.m. class.”

Instead, Lu said Gary Smith, associate dean of the Shepherd School of Music, walked Lu to the Student Wellbeing Office where he filled out a questionnaire that indicated he had symptoms of hypermania.

Lu said he was admitted to the emergency room at Methodist Hospital on Oct. 11, then the next day, to the psychiatric ward and diagnosed with prednisone-caused bipolar mania. That same day, Oct. 12, an advisor with the student wellbeing office, sent Lu a letter stating that at the current time, Rice would not change Lu’s enrolled status for the fall semester. Curtis Henry, the advisor, asked in the letter than Lu talk to staff members in the Wellbeing and Counseling Center before returning to campus.

“[Students] leave with a letter that is the roadmap back to Rice,” Donald Ostdiek, Deputy Title IX Coordinator, said. “These are very detailed very specific letters that almost can sound harsh [due to their specificity] because these are times when people are in crisis and they need to hear exactly what you're saying.”

Hutchinson said when a student experiences an acute episode, Rice may recommend immediate assessment at a neighboring hospital. This year, out of the 16 students who have been hospitalized, 14 returned immediately to Rice, according to Ostdiek, which is a sign more students are choosing to stay at Rice after experiencing mental health issues.

On Oct. 13, Neva Young, whose LinkedIn profile says she is a pyschotherapist, filed an Application for Temporary Mental Health Services for Lu with the county clerk. The same day, a judge signed an order of protective custody allowing Lu to be held at Methodist Hospital for treatment.

In a Certificate of Medical Examination also completed on Oct. 13, a doctor wrote “deterioration of mania into aggression” and “possible violence” as facts for Lu’s emergency detention. The doctor also noted Lu presented risk of harm to himself or others based on the fact that he leaves his college classes, wanders around without shoes and lays down face down on the ground.

Lu said the night of his studio class on Oct. 10, he felt nauseous so he left the class to lie face down on a couch. To not dirty the couch, he said he removed his shoes but then could not find them. He send he found them after class under the couch using a flashlight.

On Friday, Oct. 20, Hutchinson sent Lu a letter stating he was temporarily withdrawn from Rice and should use his period of absence to work with licensed professionals. In the letter, Hutchinson recommended he take time away until at least fall 2018. Lu said he was discharged from the hospital on Oct. 23.

Hutchinson said almost all students who take medical withdrawal choose to take time off, typically recommended to be six months.

“Except in very rare cases, we do not make the decision for them,” Hutchinson said. “We are actively getting them to join in the decision making process.”

Some students choose to stay at Rice despite advice they take a medical withdrawal, according to Hutchinson. Hutchinson said the Counseling Center and Wellbeing Office will work with those students to create a plan which may include certain environments or substances that should be avoided.

Once every year or every other year, Hutchinson said a student who wants to stay at Rice has a condition so severe that treating professionals say remaining continue to harm their mental health.

“On those occasions where I have the advice of the medical professionals who are treating that individual that it would actually be harmful for that individual to stay in the university, I may in fact withdraw them,” he said. “That is an exceedingly rare event.”

Lijuan Zhang, Lu’s mother, said she flew from China to wait for Michael to be released from the hospital. Zhang said two Methodist doctors she spoke to said Michael could return to his studies. One day before Michael’s release, Zhang said a third doctor told her if Michael were to try to return to Rice, he could face expulsion.

After returning with St. Louis, Zhang said she and her son saw two different doctors who said her son is fit to return.

Sometimes the approval of an outside professional for a student to resume studies is not adequate without the context of Rice, according to Hutchinson.

“They may not realize just how much stress can be created in this highly competitive and intense environment,” he said.

“There's always the standing invitation,” he said. “Keep working on this, let us know. Sometimes it just takes a little longer.”

Zhang said she is currently speaking with attorneys and considering legal action against Rice.

“[Michael] wants to be the best pianist in the world," she said. "He’s very driven and a very good kid. He has no problem at all.”

Lu said he has begun an online mini-concert series, posting videos of himself performing to raise awareness for his situation and advocate for others who have asthma.

The purpose of a medical withdrawal, Hutchinson said, is to set students up for success during and after their return to Rice.