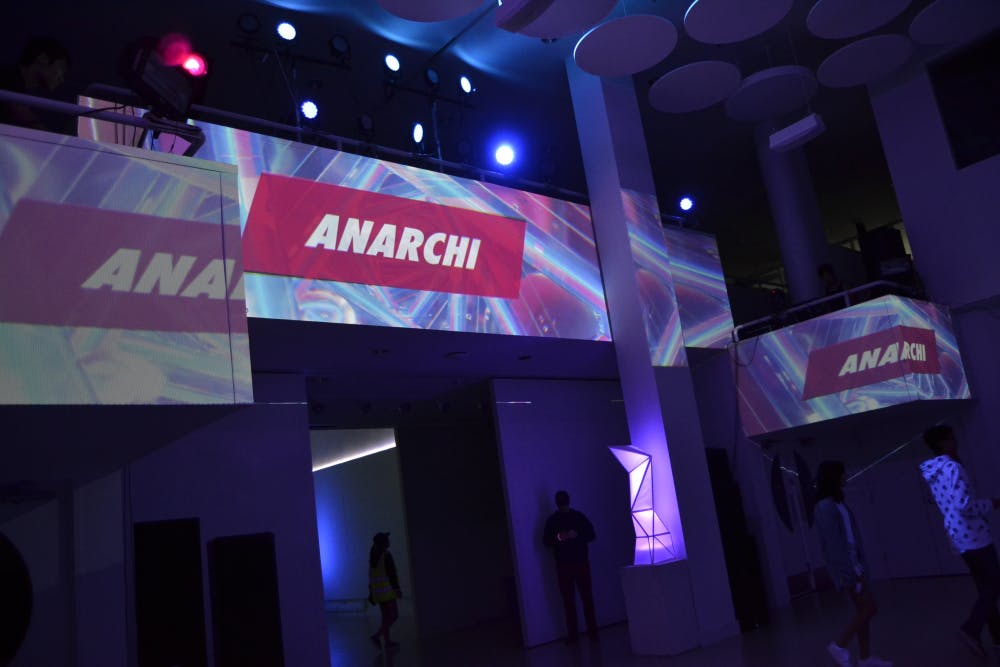 Rice University Police Department officers shut down Architectronica, the annual public party hosted by School of Architecture students, at approximately 12:15 a.m. Sunday morning, according to RUPD Captain Clemente Rodriguez. An RUPD party supervisor decided public safety was in danger after attendees refused to make space on the dance floor by moving into an overflow room and partygoers in line outside Anderson Hall tried to force their way into the building, Rodriguez said.

Beril Üzmen, one of three event coordinators known as cruise directors, said she tried to subdue the line outside by herself after RUPD Sergeant Carla Barnette told her she had 20 minutes to calm the waiting students or the party would be shut down.

“As I approached the front [of the line] some people were pushing me, not listening to me,” Üzmen, a Jones College sophomore, said. “Some people were screaming ‘anarchy’ and stuff about RUPD and doing that was never going to help them get inside. I was trying to let them know. I told them, 'They're going to shut the party down if you guys don't calm down,’ but you know, they didn’t stop.”

“We were disappointed that RUPD couldn't do something more before having to shut down the party,” cruise director Shree Kale said. “Beril had to go into the crowd without much backup from RUPD.”

Rodriguez said there were five officers working the party including officers from both RUPD and outside Harris County agencies. He said RUPD would have shut down the party regardless of which officers were on duty.

“RUPD gave several verbal commands to attendees who were in line to back up and not push or pull the door, but a number of people in line would not cooperate,” Rodriguez said. “At one point people were being pushed up against the door and others were trying to pull the door open while officers tried to maintain the crowd and prevent people from entering the already crowded venue.”

Rodriguez said RUPD communicated with the student organizers of the party throughout the event. While Üzmen said she was given a 20 minute warning to address the line outside, Kale said the only contact he had with RUPD was when officers said he had to shut the party down.

“It was definitely difficult to work with some of the officers, more difficult than expected,” Kale, a Duncan College sophomore, said. “We were told to rely on the RUPD officers in situations that we could not handle, but when I heard from RUPD about the situation it was when they were telling me to shut the party down and there was nothing else that could be done.”

Cruise director Kelly Yu said she communicated with RUPD around when she asked Sergeant Barnette if she could alter the original event plans and open the courtyard to some people waiting in line. She said Barnette agreed under the condition that attendees could no longer enter the dance area from the courtyard. The next time Yu said she had contact with RUPD was after RUPD had made the decision to shut down the party.

“They tried every other way,” Üzmen said. “That's when RUPD realized, even if it calms down, people are going crazy all around.”

Bryce Hackett said he arrived outside Anderson Hall around 11:45 p.m. and spent a total of 45 minutes waiting in line. He said when he arrived there was room to stand comfortably but as more people showed up people started to push towards the front and he lost track of his friends.

“Below the stairs, people completely disregarded instructions to back up, just staring at those at the top of the stairs dumbfounded,” Hackett, a Will Rice College junior, said. “Things were so tightly packed that I couldn't lift my hands above my head. Before the party was shut down, I watched a few people descend into panic attacks and tears.”

Ben Coben said the doors opened after he had waited for 30 minutes, but many of those let inside had pushed their way to the front. Coben said the two RUPD officers at the door told several people to make everyone move back but after 15 minutes no one had backed up.

“All in all it seemed that by attempting to control the party more than they have in past years, all they ended up doing was creating a more dangerous and clearly very poorly thought out atmosphere,” Coben, a McMurtry College junior, said. “It's funny how the publics that RUPD and the administration try to control are always the ones that end up becoming the most dangerous and rowdy. It truly was Anarchi.”

This year, Üzmen said Architectronica’s organizers took extra preparations to accommodate for the popularity of the party after 1,000 students attended last year. Changes included expanding the space to include the Anderson courtyard and Jury Room located across the hallway from Farish Gallery, the main dance area, and doubling the amount of students working security at a time from six students to 12. Üzmen said organizers worked on the event plans from September until the Thursday before the party, going through six versions before receiving approval.

Rodriguez said RUPD did a walk-through with the student organizers before the party, along with officials from Environmental Health & Safety and Rice Emergency Medical Services members. During the walk-through, Rodriguez said officials recommended lighting the outside area and designating an overflow space.

Rodriguez said EHS recommended no more than 350 to 400 people be allowed inside the party venue at any time.

“Officers monitored the crowd, and when the dance floor and adjacent area were full, they stopped allowing others to enter the party for safety reasons,” Rodriguez said. “Again part of the problem was attendees refused to move into the overflow areas or the outside area that was set up, so this prohibited others from entering the party.”

Üzmen said EHS told the cruise directors 460 people could be inside Anderson Hall at one time and with the addition of the outside courtyard, a total of 1,200 people could be accommodated. RUPD wanted to let in 25 students at a time, Üzmen said, and the first time RUPD closed the doors, one quarter of the main dance area was empty and all of the Jury Room was empty. She said she took pictures of the Jury Room and showed the officers there was still space.

“I think they closed the doors because they wanted to have some kind of an organization in letting people in, but when you do that, you get people in and close the door, people just got more and more angry,” Üzmen said.

Architectronica tech director Mike Hua said tech preparations began over two months ago. Hua said he worked with his fellow tech directors, Duncan College junior Aitash Deepak and McMurtry College junior Ashton Drake, to create art installations for the party. According to Hua, a Duncan College senior, these included an interactive projection in the Jury Room and sculptures, projections and lights in the courtyard to draw people to those spaces.

The week before the party, Hua said he, Deepak and Drake devoted at least 33 hours to setting up Architectronica and other members of the tech team spent at least 20 hours working to set up the party.

“People generally don't realize how much work goes into the planning,” Deepak said. “You're lighting three different spaces, four projectors, 30 lights and [the party shutdown] was definitely heartbreaking from a tech perspective.”

Architectronica DJ Edward Gao said both this year and last year he spent around 100 hours preparing a set for the party.

“Architectronica is something that means a great deal to me,” Gao, a Jones College senior, said. “It’s just so different from every other public, and it's one of the only events where, as a DJ, I can really share the music I am passionate about with Rice. I try to make my sets tell a story through the night, and this requires a great deal of planning and practice. For these reasons, I was pretty upset about the party shutting down. From what I saw in the booth, the crowd was loving every second of it.”

Yu said Architectronica has the attendance of Wiess College’s Night of Decadence, but a much smaller budget. This year’s NOD ran on a budget of $14,500 and had about 800 attendants, according to an organizer.

Yu, a Wiess College sophomore, said Architectronica has never charged an entrance fee until this year where non-Rice guests paid a $5 fee.

“We don't want it to be a financial hardship for people to go to cool events on campus, but I feel like that’s been a little abused by the way people seemed entitled in how they were trying to get in and getting really upset,” Yu said.

Rodriguez said RUPD will evaluate the events of Architectronica and work with the student organizers so similar occurrences can be avoided in the future.

Üzmen said next year instead of just sophomores serving as cruise directors, she is considering also having someone who has previously served in the role to increase the level of experience.

Rodriguez said shutting down parties is rare enough that RUPD does not keep track of how often it occurs.

“Although students were disappointed that this event was cut short, the circumstances that night made it apparent that ending the party early was necessary to ensure everyone’s safety,” Rodriguez said. “Fortunately, no one was hurt and no arrests were made.”

Yu said despite all the preparations, no one could have foreseen how the night would end.

“I don't think there's any way we could have expected that the line of people would devolve into a mob mentality,” Yu said.