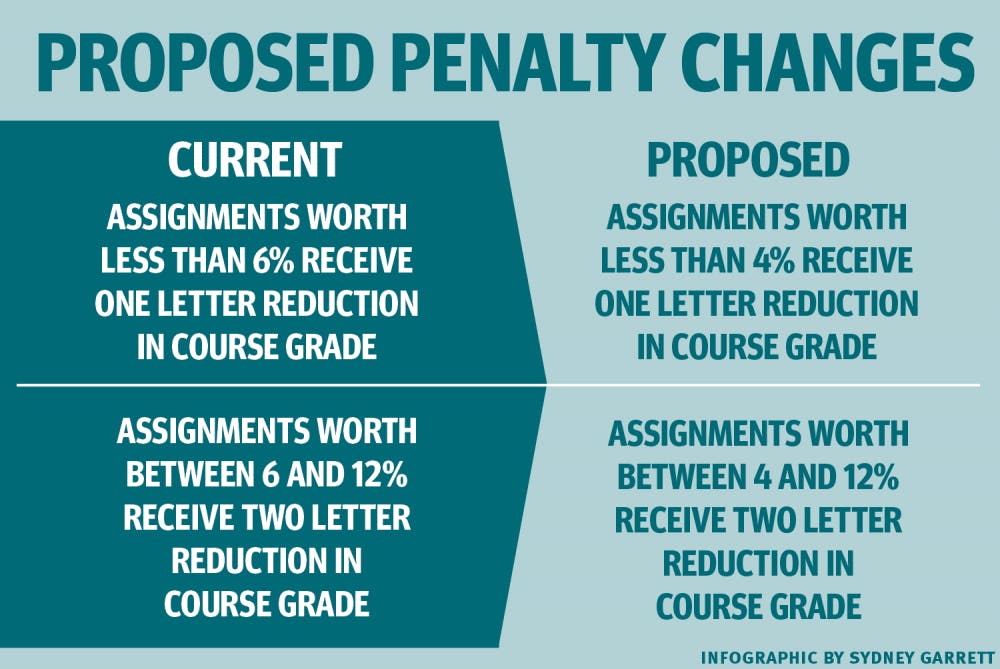 The Honor Council is on the verge of increasing penalties for Honor Code violations on smaller assignments. The council also discussed implementing a statute of limitations and debated the role of faculty in determining punishments at an annual open meeting Saturday.

At the meeting, the council voted 16 to 6 to reduce the consensus penalty structure threshold for one letter grade reductions from 6 percent to 4 percent for the 2017-18 academic year. Three-quarters of the council’s 34 members must vote in favor for the change to be approved, according to council chair Reece Rosenthal. The change is still pending due to absent Honor Council members who will vote in the next several days.

Under the modified consensus penalty structure, assignments worth between 4 and 12 percent of total course grade would receive a two letter grade reduction penalty.

The CPS serves as a starting point for council decisions on violation penalties, according to the Honor Council By-Laws, but the council may depart from the structure on a case-by-case basis.

The Honor Council decided the current one letter grade reduction for assignments was not a sufficient deterrent against cheating for many smaller assignments, which are worth around 5 percent of the course grade.

“It should always be a better option to get a zero on the assignment than cheat,” Rosenthal, a Hanszen College junior, said. “There is an intrinsic wrong in violating the Honor Code, no matter what the assignment is worth.”

The council also voted preliminarily on implementing a statute of limitations for reporting violations. In an unofficial vote, a majority of members agreed that violations that occur during a given semester should be reported by the end of the following semester, including the summer term.

Rosenthal said the CPS, which establishes punishments for cheating according to the weight of the assignment in the overall course grade, is intended to both invalidate the assignment which violated the honor code and have a punitive effect, requiring significant course grade reductions

The Honor Council has not given any penalties lower than a three letter grade reduction this academic year, he said.

Honor Council at-large representative Haihao Liu said the deterrent effect of the CPS will not work if students are not aware of the penalties.

“If students have never even heard of the CPS, in particular the severity of the penalties, then any talk of a punitive aspect acting as a deterrent against breaking the Honor Code is a moot point,” Liu, a Will Rice College senior, said. “I myself had never seen nor heard of the CPS until I joined the council.”

Rosenthal said the Honor Council would find ways to educate of both students and faculty by working with various academic departments.

Dean of Undergraduates John Hutchinson, who attended the Saturday meeting, said faculty members should be more involved in penalty decisions. Hutchinson said the Honor Council should consider leaving the size of a grade reduction penalty up to faculty after deciding if a grade reduction is appropriate for the case.

“It’s really hard for you to decide in the abstract, which is what you are doing today,” Hutchinson said. “Whether the violation took place and whether it should be sanctioned is a decision for the Honor Council to make. The impact on the grade could be left to the faculty member to decide.”

However, Honor Council college representative James Suffoletta said he believes that bringing faculty into the decisions will go against the basic principles of the Honor Code due to variability and bias among professors.

“I think it’s difficult to increase faculty involvement in terms of the faculty recommending punishments because it would then result in uneven application of the Honor Code,” Suffoletta, a Will Rice sophomore, said. “I think that the Honor Code is above any one class or any one professor.”

Rosenthal said that a committee will be formed in the coming weeks to find ways to increase faculty involvement in the Honor Council in a way that balances both student and faculty interests.

“While I always welcome ways to increase both student and faculty involvement in the Honor System, ultimately the decision will be in the hands of the council,” Rosenthal said. “When the time comes, whatever decision we make will absolutely take into consideration both the needs of students and of faculty.”