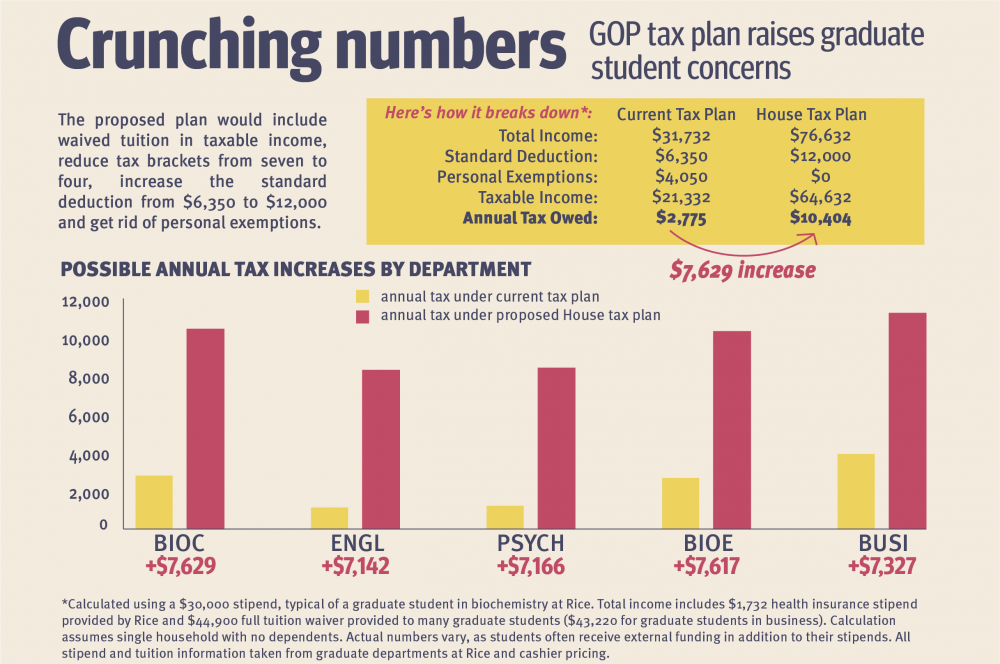 The Republican Party’s proposed tax plan threatens graduate students and university endowments, according to statements made by the American Council on Education (ACE) and Association of American Universities (AAU) and supported by Rice University.

The House’s proposed tax plan, H.R. 1, the Tax Cuts and Jobs Act, would repeal previous provisions that excluded tuition waivers and tuition exemptions from taxable income for graduate students, according to the ACE.

Chance Tarver, an electrical and computer engineering graduate student, said he would lose his ability to live just off his stipend.

“If this bill passes, I may have to quit pursuing my degree whenever it goes into effect,” Tarver said. “I will no longer be able to live off of my stipend since I will be taxed as if my income was double what it actually is.”

Chris Ellison, a history graduate student, said that he would not be able to financially support himself if he had to pay income tax on the amount in tuition waivers he receives.

"I might be keeping half of what I make now," Ellison said. "My standard of living would fall to the federal poverty line effectively."

Lee Chen, a computer science graduate student, said that he currently earns a small stipend, which allows him to satisfy basic needs. Chen said paying an income tax on his amount in tuition waivers in addition to his stipend would significantly decrease his already low income.

“Rice's current [graduate] tuition is $44,900 per year,” Chen said. “This means that we would be taxed for earning about $80,000 per year, which is about how much a person would earn at Google. If you ask any graduate student, they can tell you that we are not living like Google employees.”

Erik Weaver, a physics and astronomy graduate student, said he is against classifying tuition waivers as taxable income because it is money that he never gets to see.

“Given Rice's fairly high tuition, this increases the amount of taxes a Rice graduate student would pay by almost a factor of five,” Weaver said. “To me, this is especially unfair, since the tuition that we pay is provided either by working for the university or by research grants.”

Chen said that the new tax plan would discourage students from pursuing higher-education.

George Zodrow, professor of economics and Public Finance Scholar at the Baker Institute, said the bill would hamper higher-education advancement.

“The House proposals go in the opposite direction [of advancing higher-education], curtailing several education credits, eliminating the deductions for student loan interest and the exemption of certain employer-funded tuition payments, and making tuition waivers taxable to graduate students,” Zodrow said.

Katherine Shoemaker, a statistics graduate student, said that she decided to leave a well-paying job to pursue graduate studies, but her decision would have much been harder if she had known about this tax bill.

“I have to believe that Rice would do something about it, perhaps reducing tuition to near-zero rates for students working for the university, or something along those lines,” Shoemaker said. “If this does go through, the best case scenario is that the system changes to keep graduate school as a feasible option for students.”

Ellison said that he supports Congress’s effort to simplify the tax code, but finds it absurd that tuition waivers would be considered taxable income. Ellison also said that he believes that Rice must try to mitigate the bill’s impact if it passes, otherwise many humanities graduate students including himself may have to leave the program.

"Assuming a static scenario where the university does not respond in any way and things just go ahead, I'm not sure how many humanities students could even remain in their programs,” Ellison said. “These programs are designed to be full-time, but I don't think anybody in the School of Humanities, which is the lowest-paid of all the schools on campus, would be fiscally capable of continuing full-time and still writing the checks that would be due to the IRS in April."

The bill would also increase the cost to students attending college by more than $65 billion between 2018 and 2027 through the proposed changes to tax brackets and repeal of multiple provisions such as the Student Loan Interest Deduction and the educational assistance program, according to the House Committee on Ways and Means analysis.

“This is like getting taxed on using your rewards points at your favorite restaurants,” Tarver said. “But hey, who am I to judge? We all have to do our part to help give tax cuts to millionaires and corporations.”

The proposed bill would also repeal the Lifetime Learning Credit provision that credits taxpayers who are currently pursuing higher-education, according to the ACE. Alicia Mangubat, a graduate student in chemistry, said this would be detrimental to many graduate students.

“A lot of students really depend on that [Lifetime Learning Credit],” Mangubat said. “It decreases the amount of taxes we have to pay with our very small stipend.”

Jason Guo, Rice’s Graduate Student Association vice president of student advocacy, said that graduate students are concerned about the bill, but declined to further comment at the time of writing.

Zodrow said there would also be multiple direct and indirect impacts of the bill on the financial stability of universities due to the excise tax on endowments and the doubled standard deductions which impact charitable giving.

H.R. 1 would add an excise tax on the endowments of private colleges and universities, undermining their tax-exempt status, according to the ACE.

“Investment income from endowments is used every day to support nearly every aspect of an institution’s operations, including all the components vital to its mission and the delivery of a high-quality, affordable education, from financial aid to research and student retention and success programs,” Ted Mitchell, ACE president, wrote in a letter to Congress.

Allison Thacker, president of the Rice Management Company, which manages Rice’s endowment, declined to comment at the time of writing, saying that they are still analyzing the proposed tax bill and the impact on Rice’s investment capabilities.

According to John Diamond, professor of economics and Public Finance Fellow at the Baker Institute, H.R. 1 would also impact the amount of charitable giving to Rice due to an increase in the standard deduction amount such that donors would no longer receive a tax deduction for their charitable contribution.

“[The impact] depends on how many of the Institute's donors would no longer itemize deductions after the reform, and what share of gifts they give, as well as how much those who lost the ability to deduct contributions would pull back on giving,” Diamond said.

Mitchell said that colleges and universities would see a decline in charitable giving impairing their stability. In the AAU statement, President Mary Sue Coleman wrote that the tax plan would impact all Americans who rely on research universities. Rice President David Leebron sits on the AAU board.

“This bill will have dire consequences for Americans who rely on research universities for undergraduate and graduate education, and to conduct cutting-edge research that results in life-saving medicines, and innovative technologies that bolster our national defense and economic competitiveness,” Coleman wrote.

Tarver encourages fellow students to contact their congressional representatives and ask them to oppose any bill that would especially hurt lower to middle-class Americans.

“Nothing about ending America's leadership in higher education by destroying the graduate student system will make America great,” Tarver said.

Due to an editing error, the originally posted version of this article was not updated with a corrected quote from Lee Chen. Graduate tuition is $44,900 per year, not semester.