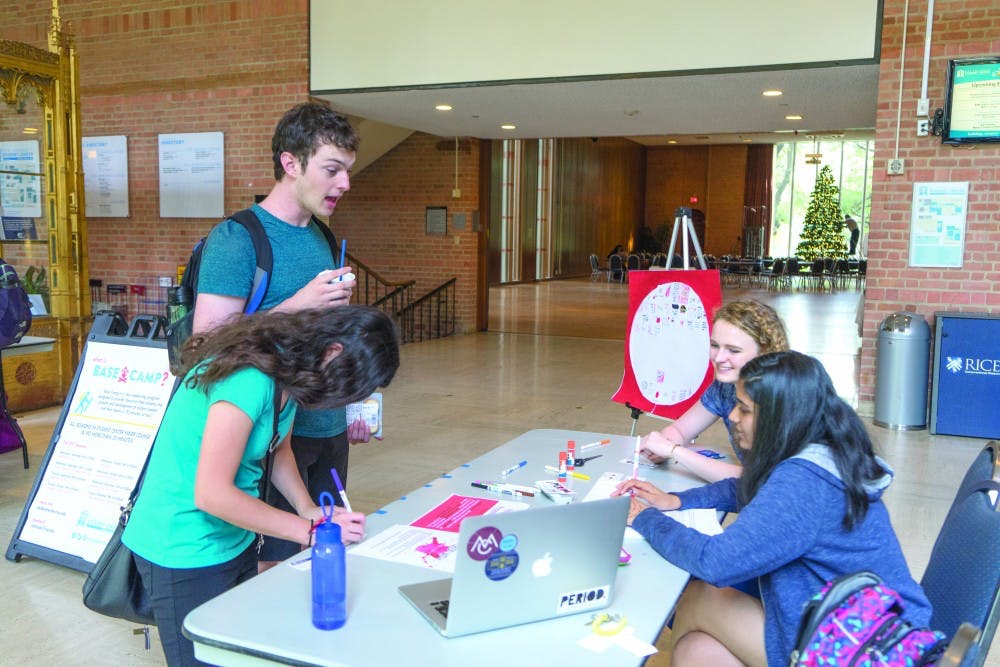 Students celebrated the first ever Period Week from Nov. 13 to Nov. 17 with events aimed to de-stigmatize menstruation and tackle unfair legislation.

The Houston chapter of the club PERIOD. The Menstrual Movement, which was founded in late 2016 as a joint venture by the students of Baylor College of Medicine and Rice University, organized Period Week and intends for it to become an annual event.

According to Bharathi Selvan, philanthropy coordinator and special events committee head of PERIOD., spaces in which people can comfortably and positively talk about menstruation must be established.

“I love Rice, and I don’t want it to be a place where menstruation is a taboo topic and people feel ashamed to talk about it,” Selvan, a Hanszen College sophomore, said.

Club members were stationed in the RMC throughout the week, where they encouraged passersby to talk openly about menstruation. On the first day, about 80 Rice students participated in creating a mosaic of drawings related to menstruation, according to Selvan.

The second day included a photo campaign with the hashtags #de-stigperiods and #IStandWithPeriods, and a speaker panel headed by Duncan College sophomore and the club’s distribution coordinator Emily Dickinson. The panel was attended by about 15 students, according to Selvan.

Cathy Wu, co-president of PERIOD. and one of the panelists, said including queer and transgender people in the dialogue about menstruation is imperative.

“For some people, [menstruating] is dysphoric and it just feels totally wrong,” Wu, a Lovett College senior, said. “And then there are some people who are really in tune with their bodies and they want that sort of personal relationship with themselves.”

Zoe Clark, a Wiess College sophomore, said she appreciated learning about the anatomy of the reproductive system in regards to menstruation, and found the panel discussion informative.

“[One of the questions was] why should cisgender straight men care about women and the answer was just because it's a biological function and they definitely know someone who menstruates,” Clark said. “Approximately half the population menstruates, so it's not like a minority of people do it.”

On the third day of Period Week, more than 100 people participated in a letter writing campaign targeted at eliminating the tax placed on menstrual hygiene products despite tax exemption granted to other basic necessities, Selvan said. The last event, called “Spilling the T Party,” was a trivia and discussion event attended by about 12 students.

Club members also painted the RMC glass doors throughout the week. This attracted both positive and negative attention, according to Selvan.

“We definitely had a very small portion of people express their distaste in our initiative,” Selvan said. “However, I think that’s okay. The whole point of Period Week is to simply have more conversation but of course, there will be a few people who don’t agree with everything.”

Wu said they hope PERIOD. will directly impact the experience of menstruation on the Rice campus.

“Another thing we're looking at doing is getting menstrual product dispensers in all of the bathrooms on campus, including the men's bathrooms, including the gender neutral bathrooms, and getting the Rice administration to make period products free in bathrooms,” Wu said. “It's yet another layer of inaccessibility in terms of income and financial burden.”

According to Wu, the goal of Period Week was to correct the misconceptions surrounding menstruation and make it a comfortable topic of conversation.

“I would like to see a cultural shift in how we talk about menstruation, think about it, and tie it to different things, like pregnancy or sex or gender and womanhood,” Wu said. “I would like to see some of those things shift and change a little bit to allow for more recognition of variations in individual experiences with menstruation.”