Due to concerns brought up at the October 25 Faculty Senate meeting that heavy course requirements would limit students with fewer incoming AP credits, the neuroscience major proposal was revised and will be voted on at the next Senate meeting. 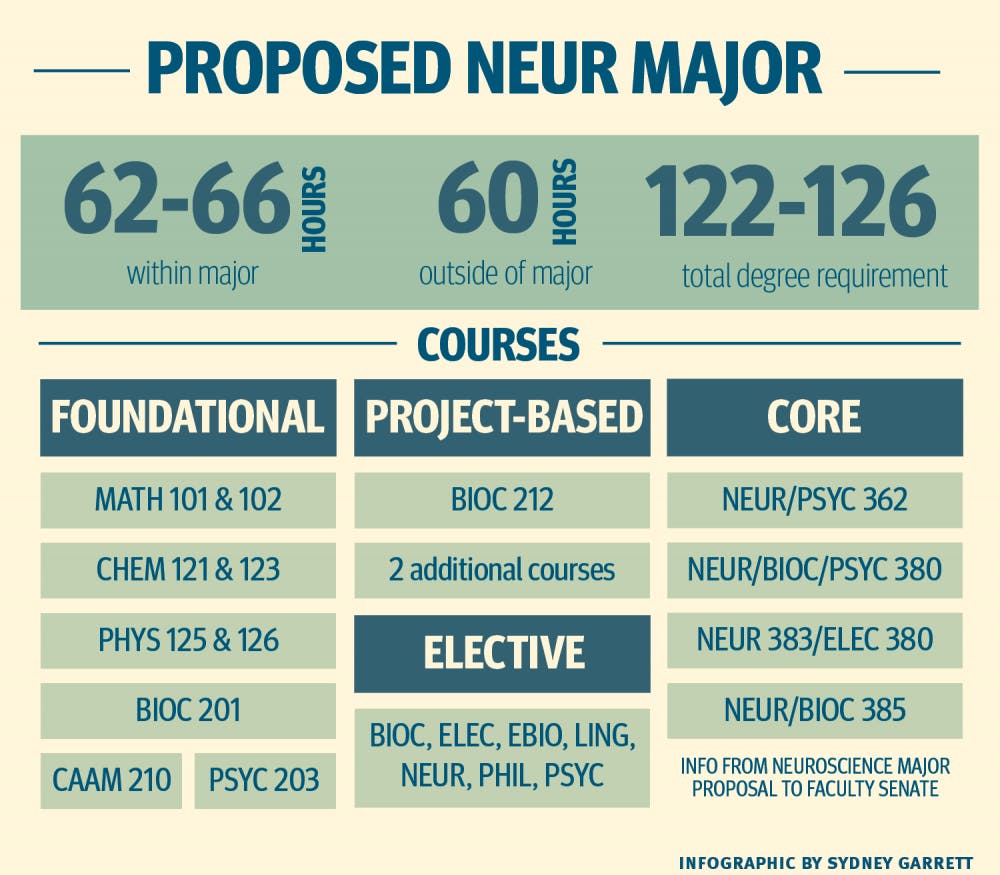 Faculty Senate will vote Nov. 15 on whether to approve a new interdisciplinary neuroscience major, which would open to students next semester, according to professor Behnaam Aazhang, NeuroX Steering Committee director.

The Faculty Senate postponed voting on the major at their Oct. 25 meeting after members voiced concerns that students entering Rice with limited Advanced Placement credits would not be able to complete the prerequisites to reach the 400-level honors research courses within four years, according to Susan McIntosh, chair of the Committee on Undergraduate Curriculum.

“My sense is that just about everyone involved — and I know that includes the architects of the neuroscience major — feel all Rice undergraduate degrees and other opportunities should be accessible to anyone admitted to the university,” Michael Wolf, faculty senate member and chair of the department of mathematics, said. “I expect [the major] approved at the next Senate meeting in November. It’s just unfortunate that there isn’t a scheduled meeting of the Senate earlier to get this issue settled more quickly.”

The version of the major presented on Oct. 25 required students to enter with 26 AP credit hours in order to reach the 400-level honors courses, Wolf said. However, the median number of AP credits for this year’s entering class was 23, so the honors courses would have been inaccessible to over half of students.

The NeuroX Steering Committee submitted a revised proposal to the CUC on Oct. 27. The CUC approved the proposal the same day, which is required step before the proposal is presented to the Faculty Senate.

The NeuroX Steering Committee, which was created to formulate and draft a proposal for a neuroscience major, is comprised of faculty from various departments and programs, including neuroscience, BioSciences, psychology and electrical engineering. The committee submitted the original proposal in January to the CUC, which underwent two major and two minor revisions before the Oct. 25 Faculty Senate, McIntosh said.

The revised neuroscience major according to a proposal dated Oct. 30 is a Bachelor of Arts degree program requiring between 62 and 66 credit hours to satisfy major requirements with hours varying due to which electives students choose. The requirements are subject to change until the Nov. 15 Faculty Senate meeting, according to Aazhang.

Including Rice’s requirement of 60 hours outside of the major, the total hours for the revised neuroscience BA amounts to between 122 and 126 credit hours. A Bachelor of Science degree is expected to follow in coming semesters, the proposal said.

“The program will be unique amongst the top 20 U.S. universities in that none of the other undergraduate programs require core courses in neuroengineering in combination with strengths in biology and social sciences,” the proposal states.

Lucy Lai, a Lovett College senior who is looking to apply to neuroscience graduate programs, said she believes the structured major will allow students to complete the necessary coursework to be competitive applicants.

“I’m really excited for it to finally become an option for students, because while Rice has many neuroscience-related course offerings, it really lacks a structured curriculum that ties together all aspects of neuroscience,” Lai, a Lovett College senior, said. “I would have liked that kind of structure as a freshman.”

While the neuroscience major and minor will be administratively housed in the biosciences department, an interdivisional agreement was signed by deans of the four involved schools - the George R. Brown School of Engineering, the Wiess School of Natural Sciences, the School of Humanities and the School of Social Sciences - to ensure sustained and productive collaboration, according to the proposal.

At the Faculty Senate meeting, senate members expressed concerns about the lack of a home department for the major and overlap with the cognitive sciences major.

“The bare minimum requirements of cognitive science certainly did not provide enough rigor to prepare someone for graduate studies [in neuroscience],” Lai said.

According to the proposal, students are encouraged to pursue independent research at either Rice or the Texas Medical Center. Faculty members at Rice, the University of Texas Health Science Center and the Baylor College of Medicine have agreed to accept Rice undergraduates into their research laboratories for independent study.

The NeuroX Steering Committee found significant student interest in the major based on the that the neuroscience minor, which was introduced in 2013, is the fourth most popular minor at Rice. In addition, more than 50 students have participated each year in the Independent Neuroscience Research (NEUR 310) class created along with the minor, with many authoring peer-reviewed publications.