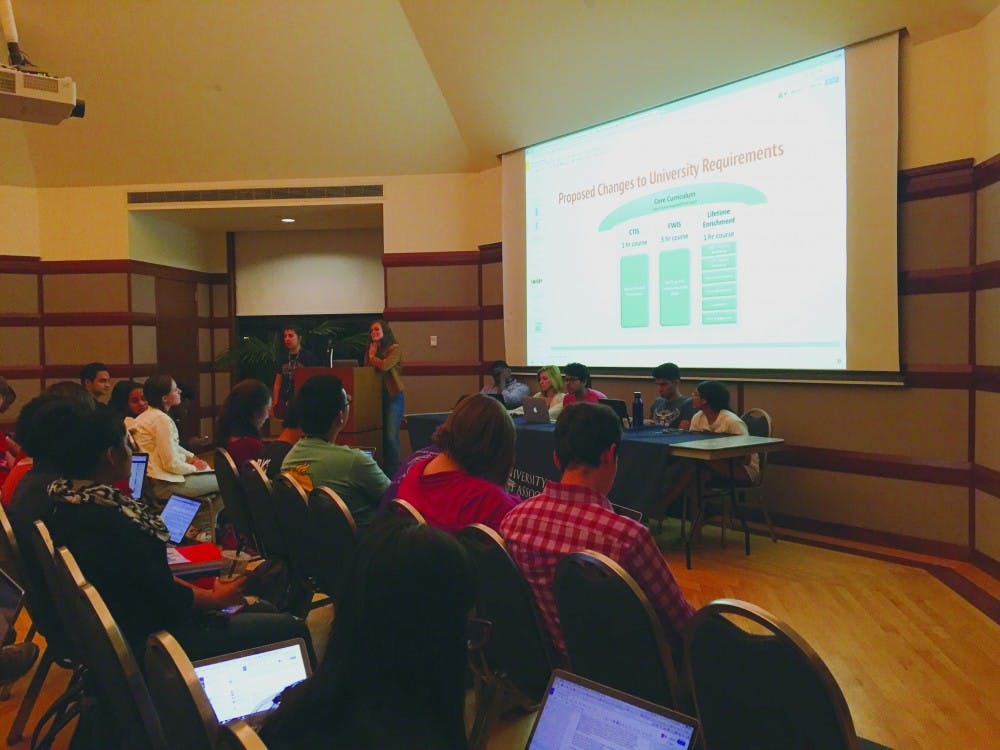 Note: this story is developing. On October 23, Student Association President Justin Onwenu stated that plans have changed and the resolution with the Lifetime Enrichment proposal will not be introduced Nov. 7. Instead, students will be asked whether they approve the proposed Lifetime Enrichment program on the mandatory Survey of All Students administered at the end of the semester. Onwenu said he would bring the proposal back to Senate after the survey no matter the outcome, but that he wanted to better assess student opinion first. The original article from Oct. 17 is below; further reporting to follow. [October 23, 2017]

Student Association members proposed replacing the Lifetime Physical Activity Program with a wider range of classes at the SA Senate meeting on Monday. The legislation, which may change as student feedback is gathered, will be introduced on Nov. 7, according to Student Association President Justin Onwenu.

The proposal outlined in the current version of the legislation advocates for the creation of a one credit hour graduation requirement in Lifetime Enrichment. Students could choose to take courses in financial literacy, cultural enrichment, leadership and civic engagement, as well as in the existing LPAP category, which would also include mental wellbeing courses.

“The rationale behind our idea is that the current university requirements don't allow students to understand what they lack in basic skills, whether that be community service or civic engagement or adulting, and so we want to expose students to a wider range of opportunities without the burden of an extra requirement,” Juliette Turner-Jones, one of the creators of the Lifetime Enrichment proposal and a Duncan College senator, said.

In its current form, the legislation would create a 12-member Lifetime Enrichment Task Force chaired by Turner-Jones and Onwenu and including all the proposers. The group would work with offices such as the Doerr Institute for New Leaders and the Center for Civil Leadership to develop the Lifetime Enrichment Program and present the program's details to the Senate by the end of the 2017-18 term.

The proposal is another of recent efforts to reform university requirements, following Faculty Senate approval of lower distribution requirements in April and introduction of the new student Critical Thinking in Sexuality workshop first proposed in SA Senate legislation in 2015.

“Although the idea that we have is in my personal opinion the best idea to address [needs in undergraduate education], we really want to get more input in terms of what people think would be better alternatives,” Onwenu, a Sid Richardson College senior, said. “We'll decide in the near future if we want to just present the proposal as is and say, ‘Do you want this,’ or if we want to talk about it more.”

Brown College President Santiago Avila said he hoped those proposing the legislation keep an open mind about other proposals and not become too committed to one idea.

“If we're going to make something like this happen, which I would say is a fairly transformative change to our education, the process is what is going to be most important moving forward,” Avila, a senior, said.

Baker College Senator John Michael Austin could not attend the SA meeting but had a proxy member read his concerns.

“I think [the proposal] will result in more students not pursuing physical activity at Rice,” Austin’s proxy said. “Is that the price we're willing to pay so we can ensure these new classes are taken? Because right now they exist, but people just don't know about them.”

Turner-Jones said she did not think reforming the current curriculum would have a large impact on students’ physical activity.

“I just really don't buy that the LPAP requirement suddenly makes everyone these athletes,” Turner-Jones, a sophomore, said. “If I'm not someone who is physically inclined and I take a swing dancing class I’m not going to go be a swing dancer for the rest of my life. If we’re going to be concerned about something that Rice students don’t have, what about mental health? The culture of business, the culture of overwork, I think this is something that needs to be addressed more than physical activity.”

McMurtry College New Student Representative Sanat Mehta said he was concerned about maintaining the quality of courses if many are added at once.

“I would want to make sure that these new courses that come in, if we add many of them at once, we would want those to be of good quality,” Mehta, a freshman, said during Senate. “You wouldn’t want them to be fluffy, and that is a little bit of a danger when you have a one-credit course.”

Onwenu said there are already classes at Rice which could fit into the categories in the Lifetime Enrichment proposal such as visual and dramatic arts classes that could satisfy the cultural enrichment component. In addition, Onwenu said several groups would be willing to implement courses.

“I talked to Tom Kolditz with the Doerr Institute, and he said he within a weekend could develop a one hour course curriculum executive leadership type of course,” Onwenu said. “I talked to Kathy Collins, the vice president of finance, and she has wanted to teach students how to be financially literate for the longest but hasn’t had an avenue to do that.”

Onwenu said his goal is to have student support to expand the one-hour LPAP requirement by the end of his term.

“I’m trying to tell students that we have a lot more decision making power than people think we do,” Onwenu said. “We just need the approval from students to be able to say we want more options, and then 10 years down the road there may be 30 LPAPs and 30 others.”