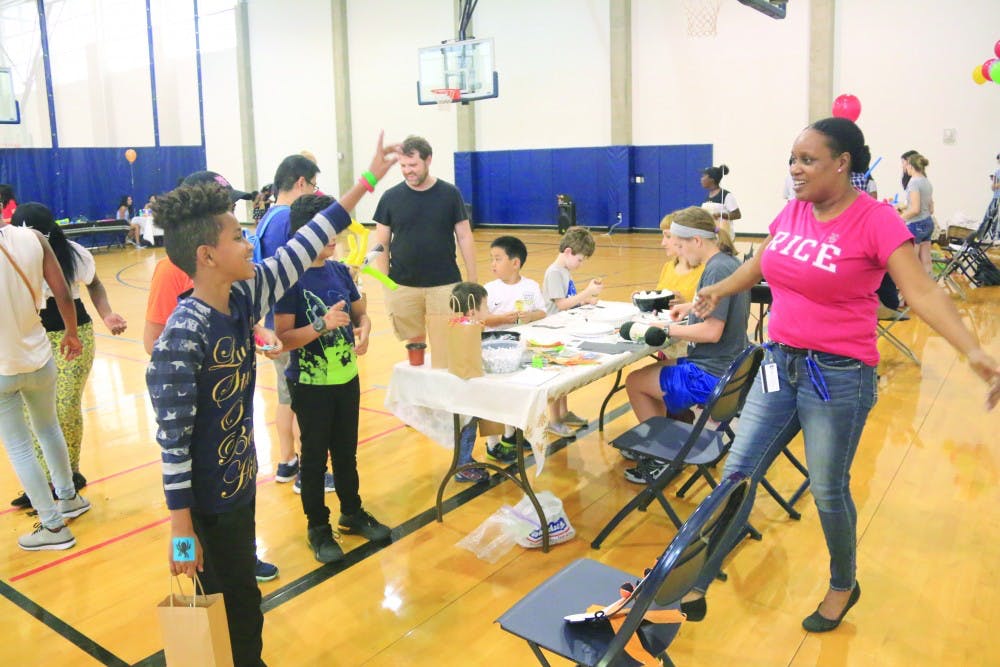 The Rice Student Volunteer Program ushered in the holiday season this weekend with its annual hosting of the Project Pumpkin Fall Festival for local Houston students.

The event, which was a cooperation with the Partnership for the Advancement and Immersion of Refugees , sought to provide underprivileged children with a safe space to have fun, according to RSVP’s Facebook event.

Students from Las Americas Newcomer School, Jane Long Academy and Paul Revere Middle School came to the Barbara and David Gibbs Recreation and Wellness Center on Saturday, Oct. 21 to participate in a range of fall-themed activities hosted by several on-campus clubs and student volunteers. Among the activities offered were making balloon animals, basketball and touring the Rice campus. The event also featured performances by the Rice Dance Team and Rice Bhangra.

Shifa Abuzaid, a Program Assistant at PAIR Houston, said Project Pumpkin offered a way for the students, many of whom are newcomer refugees, to have fun, be creative, and learn about a popular holiday.

“A lot of these kids don't necessarily have access to some of the activities here, as simple as they can be, whether it's face painting, painting a pumpkin or decorating a cookie,” Abuzaid said. “It really excites them about not just the Halloween spirit, but because a lot of our kids are refugees it helps them understand American culture, what kind of holidays we celebrate, and what kind of activities go on at those holidays.”

Pancakes for Parkinson’s President Kseniya Anishchenko, who volunteered last year with the Sid Richardson Outreach Committee, said Project Pumpkin was a way for her club to get more involved on campus.

“Since Pancakes for Parkinson’s doesn’t have much of an impact on Rice campus right now, we just wanted to maybe do this every year from now on so that we have an impact on the Rice community and Houston community,” Anishchenko, a junior, said.

While the event was focused on creating a fun environment for students, there was also an educational component, according to RSVP Co-President Lynn Zhu, who coordinated the event along with other members of the RSVP board.

“It’s a chance to not only interact with kids, which is always a fun opportunity, but you can also make educational opportunities out of it,” Zhu, a Sid Richardson junior, said. “There was a booth and they had a fracking experiment, they had science experiments. It’s a cool way to bring education into a neutral environment that’s not school.”

According to a video posted by the Rice University News and Media website, Project Pumpkin was reintroduced in 2012 after a short period where RSVP ceased hosting the event.

“It would stop and start again,” Zhu said. “There were several years it didn’t happen.”

Since then, Zhu said Project Pumpkin has increased in size each year. Zhu attributes some of this growth to RSVP’s recent partnership with the Women’s Club of Rice, which consists of women faculty and staff as well as female spouses of faculty and staff.

“They bring a lot of supplies and volunteers, and they have a lot of resources,” Zhu said. “Before that it was just us doing this, and it wasn't as big or as organized. They definitely help a lot.”

The size increase is also due to Project Pumpkin’s invitation of faculty families, according to Zhu.

“We've always had PAIR students come, but in the past two years we've invited the faculty's children as well. Now that it’s open to anyone, it's become a lot more popular and more fun because there are more people here,” Zhu said.

Over 50 volunteers worked to create a fun holiday environment for the children on Saturday, Zhu said. According to Shifa Abuzaid, their work has not gone unappreciated.

“The kids really like it,” Abuzaid said. “It’s really important that they get to go to it but also really exciting that Rice does this and they're willing to invite our kids to it every year. So we're really happy about it.”