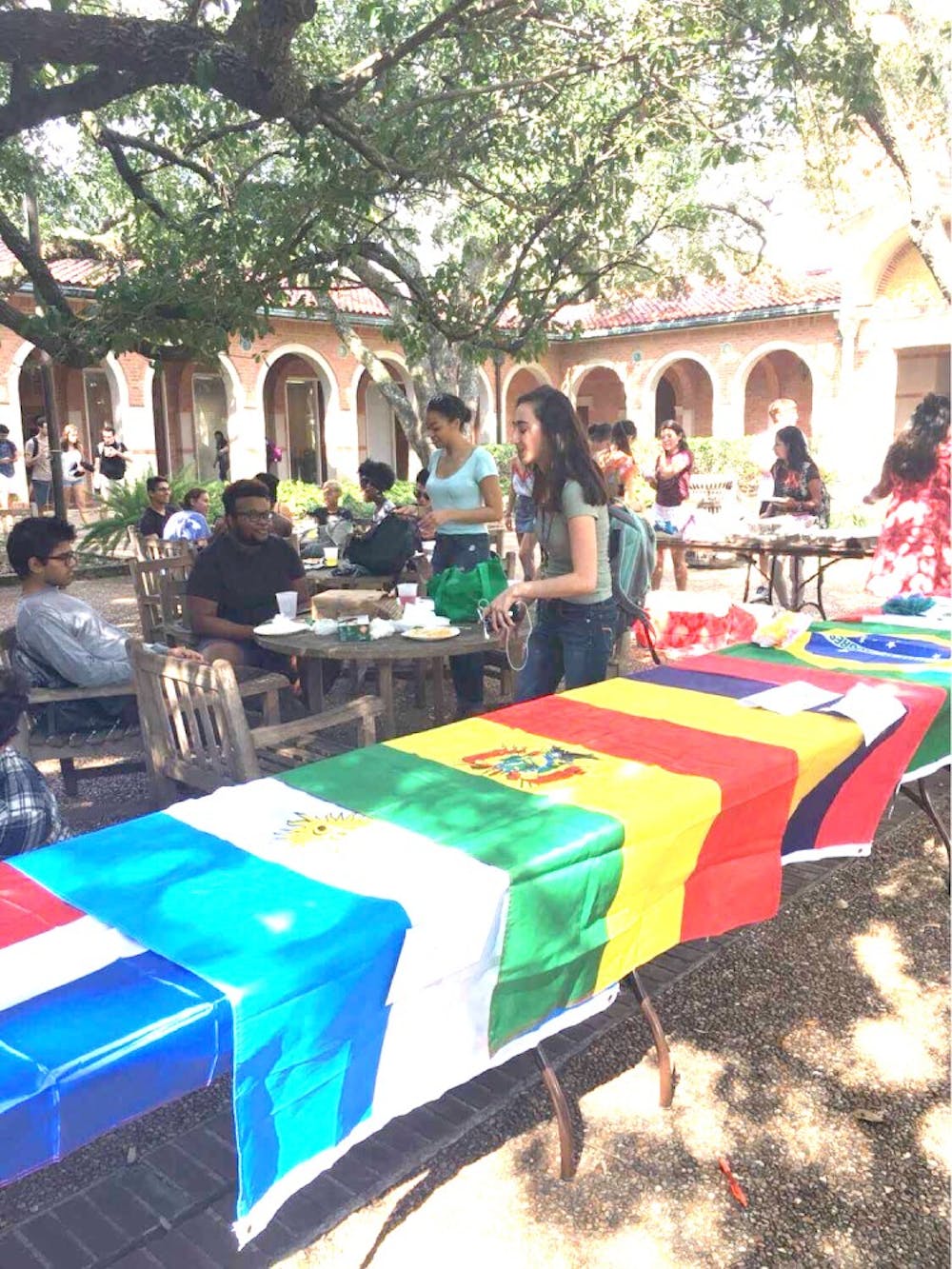 Students gather for the Hispanic Association for Cultural Enrichment at Rice's festival in celebration for Hispanic Heritage Month (Sept. 15 to Oct. 15).

Twenty-two flags adorn the tables in the Rice Memorial Center Courtyard, their bright colors representing every Spanish and Portuguese-speaking country in the Americas. Arroz, pupusas, empanadas and agua frescas offer a culinary window into Hispanic and Latino cultures, and Latin pop music fills the air.

The Hispanic Association for Cultural Enrichment at Rice held a festival on Friday to celebrate Hispanic Heritage Month. This is the first year they have celebrated with a festival.

“Before I got here, HACER was known as the Mexican club,” Maldonado, a Lovett College senior, said. “There are a lot of different looks to being Hispanic and Latino at Rice, and that’s something HACER has really tried to focus on over the past [few] years.”

Venegas conducted research to ensure a diverse playlist and food selection. Although many Hispanic cultures have similar music and cuisine, Venegas said it can be hard to ensure representation. While authentic Mexican food is cheap and readily available, food from smaller countries like Venezuela is harder to find.

“This year, we’d wanted to do an event that was a little more inclusive of other Latin American countries, especially those that are less apparent at Rice,” Venegas, a Sid Richardson College sophomore said.

The diversity among HACER’s officers has helped the group represent different cultures, Venegas said. HACER and her experience at Rice have helped her understand the diversity of the Hispanic community.

“Even though the majority [of my high school] was Hispanic, there was minimal diversity to what being Hispanic meant because the majority was Mexican,” she said.

According to Maldonado, Hispanic is not considered a single race because it includes many different races.

“Hispanic means a lot of different things,” Maldonado said. “People might be half Hispanic, they might be full Hispanic but not speak Spanish or Portuguese. Or they have light skin and nobody would ever guess that they’re Hispanic even though they speak way better Spanish than I do.”

Venegas said Hispanic Heritage month is a chance to celebrate diversity within the Hispanic community.

“We’re all different, but we’re also all one,” Venegas said.

To showcase this diversity, HACER collaborated on a photo campaign with Humans of Rice University Facebook page, Venegas said.

“I love my Hispanic culture,” said Lovett College junior Arlen Suarez in her post. “It means great food and sweets made by my grandma. It means valuing sacrifice and humanity over materialistic excess. But most of all, it means home."

Martel College freshman Ashley Phillips reflected on her memories of Venezuela, which she has not visited in seven years despite spending every summer until she was 11 visiting family.

“I have a multitude of memories from my time in Venezuela, from the arepas, empanadas, and cachapas that filled my young tummy to exploring the country with my family and friends,” she said. “These are memories I will hold onto until the day I can return to my home away from home.”

“I am a product of Mexican culture, a product of ‘illegal immigration,’ a proud tortilla eater, and I love being brown,” said Vasquez in her own post. “If you see me today, I will proudly tell you I am Mexican."

HACER sent a form asking people to share their stories, and Humans of Rice University followed up with the respondents to take their pictures, said Wei, a Will Rice College senior.

“I think everyone was very proud to be able to share their stories,” Wei said. “It was truly in celebration of Hispanic Heritage Month.”

Humans of Rice University published a photo and the complete blurb of all the students and faculty members who filled out the form, according to Wei. Vasquez also interviewed Hispanic members of the Housing and Dining staff for the photo campaign. In total, the Facebook page published 10 stories.

Wei said she thought the photo campaign was effective in raising awareness about Hispanic Heritage Month and starting conversations.

“I had no idea that Hispanic Heritage Month was Sept. 15 to Oct. 15, and if I hadn’t done the series, I wouldn’t have known anything about it,” she said.

“Rice opened up my eyes to what being Hispanic really is,” he said. “I’d never realized how important it was to me

or how much I cared about it.”

“Often, our portrayal in media and politics reduces what it means to be Latinx in a one-dimensional and damaging way,” she said. “We are not just your poncho-wearing, taco-eating meme. We are a complex, dynamic group of individuals who prides themselves in a rich diversity, and this month allows us the chance to share our cultural intricacies and showcase the potential of our diverse people.”

Torres has been a member of Mariachi Luna Llena since her freshman year and served as president last year.

“Mariachi has been a way to find myself surrounded by really cool people,” she said. “Since I want to spread that love, my main role has been helping the Mariachi grow on and off campus.”

Andrea Galindo, who has been a member of Mariachi Luna Llena since it began in 2013, said the group provides a venue for students to play music and celebrate Hispanic culture.

“It’s a chance to see other parts of the city and learn about a new culture for the non-Hispanic to learn about another culture,” she said.

The band performs most weekends during the semester, and the majority of their events are off-campus at events like weddings, quinceaneros, anniversaries and even two funerals.

“A lot of people really like mariachi music, and for me it’s really moving when we see people crying because they feel the music so strongly,” Galindo said.

Since its inception, the group has grown more professional, memorizing their music instead of carrying around stands and performing at a higher caliber, Galindo said. Still, most people do not have previous experience with Mariachi music.

Although Galindo had not previously played mariachi music before joining Luna Llena, she comes from Guadalajara, Mexico, which she said is also the birthplace of mariachi music.

She is now the coordinator for Rice’s Center for Energy and Environmental Research in the Human Sciences.

Mariachi Luna Llena raises awareness about mariachi and Hispanic culture at Rice, according to Galindo. Most of the members are not Hispanic or Latinx but all enjoy the music and culture of mariachi.

For Torres, it provided an opportunity to continue playing music and to stay in touch with her Latina culture.

“Even though we do love displaying the cultures and being known for having good food, we are shifting in a way that makes us more socially aware,” Venegas said.

Recently, HACER has pursued social issues with more intensity, Maldonado said. It held a discussion about DACA on Sept. 5 after President Trump repealed it.

“It’s kind of hard to ignore political issues now because so many board members have been affected directly by Trump’s decision to terminate DACA,” he said. “In the past, HACER has kind of shied away from politics because Hispanics are so diverse and not everybody agrees.”

Venegas said that HACER has yet to encounter political issues that have caused significant disagreement among the board.

“Especially for immigrants, it’s really important to have that group that you connect with,” he said.

Edit 10/18/2017: The article has been updated to reflect that the RMC courtyard includes flags from all Spanish and Portuguese speaking nations in the Americas, rather than in the world.